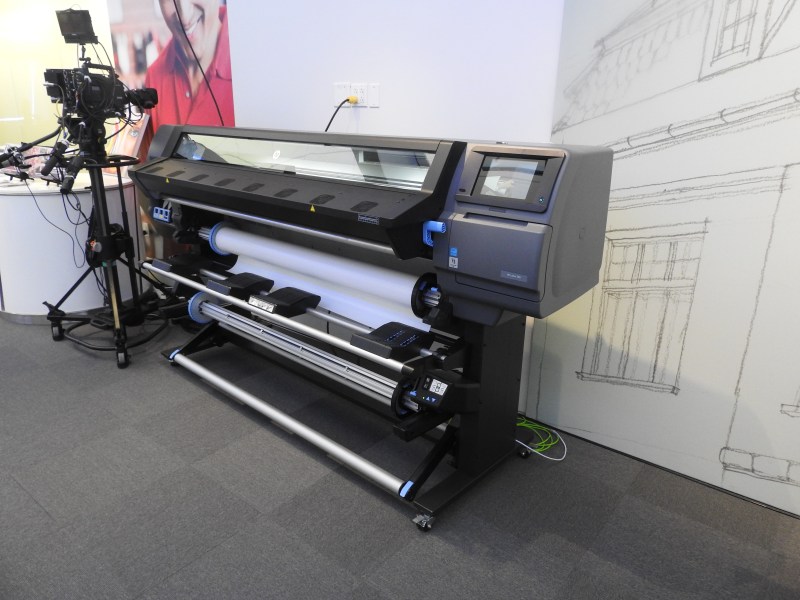 Above: One of HP’s big printers.

VB: Do you guys share some of that same vision as Intel, with the Alloy project they’re talking about? Or do you have your own view of it? It was all going to be migrating from the PC into the headset, and then everything you need is attached to your body, batteries and all.

Wall: The answer is yes and yes. We clearly work closely with them, and with Microsoft as well. The vision they have is very similar to what we would look at. We might differ a little on what the implementation might look like, or how we would go about doing it.

I alluded to that a little bit when we talked about hypermobility. These are interesting models because you have so much information, so much power pack, but you’re still carrying it. When this starts to distribute on the body, when you have an on-body network and all those pieces are compatible, you start seeing a lot of interesting things. When I say “hypermobility” that’s exactly what I mean. It may start out clumsy, like the pager that used to be clipped on your belt. But it has an on-body network connected to sensors, and what you see is through a set of glasses with the ability to project either reflected on the glasses or into the retina. So much of that is so close today.

We have a guy with a hearing aid. His is kind of spooky, because his hearing aid can communicate with him. There you go. You have something in the ear that not only helps with your hearing but communicates things to you. Take that with visual responses and compute capabilities and sensors that will look like tattoos on your body. Life gets really interesting.

VB: Do you think the Magic Leap glasses will be the same kind of thing, in the near term? Augmented reality where you can’t tell the animations from real life.

Wall: It’ll be interesting to see. I don’t have any deep insight in that. You probably have more than I do. But the vision they have is in the right place. How it’s employed will be a question.

Augmented reality, some of the most interesting uses we see are not in the consumer space. They’re much more in the enterprise. We deploy what we call graphics printers. They print all these things on the walls. These are huge printers, wider than this patio and higher than this ceiling. They can print massive detailed prints at incredibly high speed. It’s all done digitally, so it can be a one-off. But the machines themselves are $11 million, and incredibly complex.

We needed a way to repair them in the field without flying the one engineer around to go do it everywhere. We use augmented reality. We adapted Google Glass so that the tech person on site could wear the glasses and look at the machine, and the person back at the central support station could guide them to what needed to be fixed. They could do tutorials through the glasses. That’s where I think you’ll see interesting applications – medical, automotive. Think about mechanics fixing cars. All manner of training. 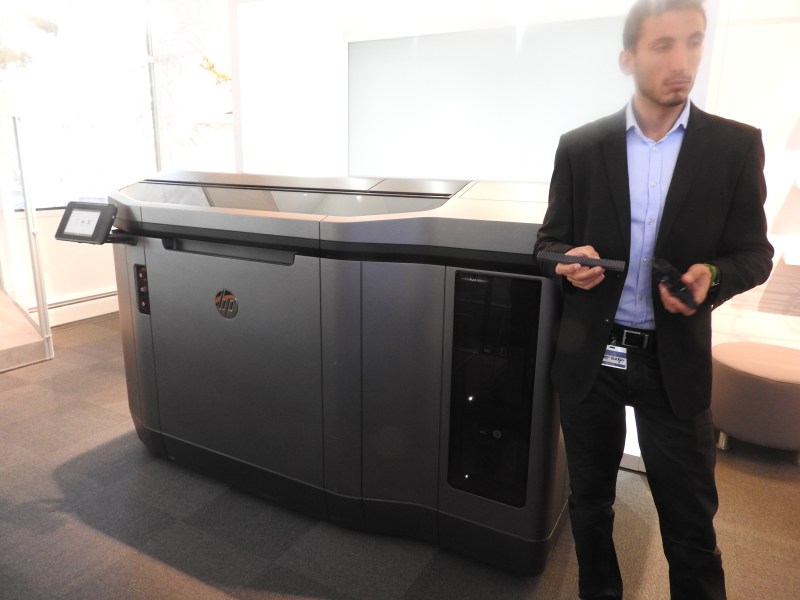 Above: This HP 3D printer can print out 60 percent of its own parts.

VB: I get excited about these things, but then—the Project Alloy device itself is huge sitting on your head. You’d never wear it out and about. It looks like we need about three more spins of Moore’s Law before anybody would wear that.

Wall: This might sound funny, but it really is why we did this anchor vision around blended reality. The whole idea that you have not succeeded until it disappears into the background, until the technology is an integral part, something naturally with you. Many of the technologies we have today, we’re eons away from that.

My favorite is—what was it, the planet they discovered near Alpha Centauri, a mere four light-years away? They thought it might be able to support human life, talking about sci-fi. Then you stand back and think about how fast we can fly now and how long it might take us to get there. Thousands of years. Entire civilizations would come and go. You could go from pre-Roman Empire to the present day and you wouldn’t be there yet. And that’s just four light-years. That’s when you realize you’re not going to live long enough. 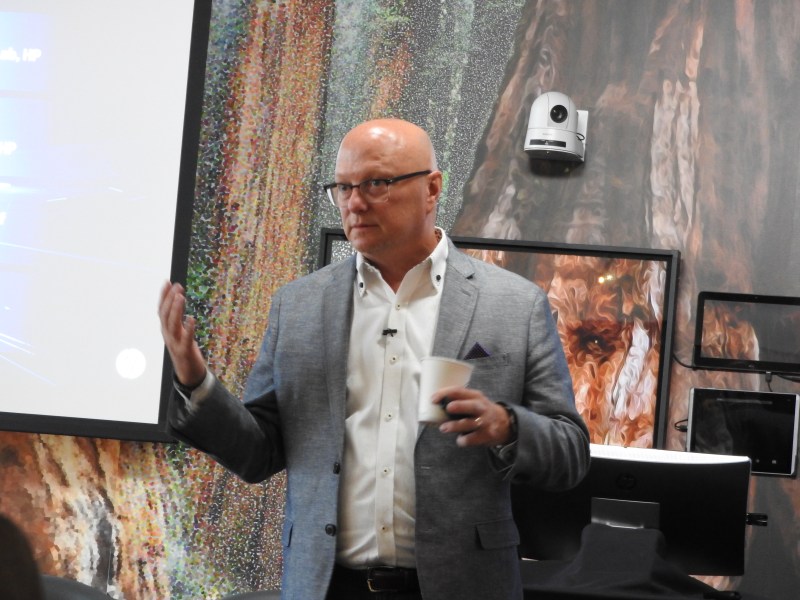 VB: Well, you just have to work on the things that will make your life longer. You know, if you weren’t doing this, what would you be doing?

Wall: It’s a good question. I don’t know. I came back to HP about four years ago with a mission, to re-establish HP at the center of Silicon Valley and the future of tech. That’s going to take a little longer. But I think we’re on a great path, if you look at the rollout today. If I look at what I’m doing now, I don’t know how it could get any more fun.

More than anything, it’s a move away from thinking about technology for technology’s sake. There’s a few ways you can do that. If you can re-anchor the discussion in a different way, and re-imagine the possibilities—we were talking about movie sets. That’s one way. You envision a future and then you think about how you follow through on those problems. But thinking about it from a human standpoint, the challenges we have, it forces a technologist to move out of that realm.

I run HP Tech Ventures, our venture capital wing. That gives the other part of it. There’s the insular part, what we’re doing in the labs, but the world—we have a small window on technology, based on our capabilities and competences and what we can create. We complement that with our own tech venture wing to invest in startups, outbound. That’s how we get the visibility. What’s the wild and wacky stuff going on out there? There’s a lot of interesting stuff happening.

Wall: That’s right. And of all varieties. You see them here in the Valley, everywhere. But you get outside the Valley, outside California, you get places that are really interesting. Very creative. You wouldn’t have thought of what they’re doing.

We know Israel is a very big area, a center of venture capital and technology. There’s an interesting cycle going on there today that’s not visible to a lot of folks. The advanced print things we do, a lot of those were invented in Israel. Those guys are all cycling around this world of physical machines, coming up with some really interesting things based on derivatives. A lot of the most novel 3D print technology we’re seeing, much of that had its start in Israel.