A year ago, Hewlett-Packard revamped its approach to fundamental research with a restructuring at HP Labs. The population of the labs’ research team had been declining for years, so new director Prith Banerjee decided to refocus the team from hundreds of projects to just 20 or 30.

A year later, Banerjee said the team is much more focused on just 23 major projects now and 40 smaller ones, has eight areas of focus for its 500 researchers, and is far more interested in collaborating than keeping everything secret. On Monday, HP Labs is publishing its first annual report as well as a description of hundreds of research papers produced in the past year. The reports can be found at HP Labs’ site. 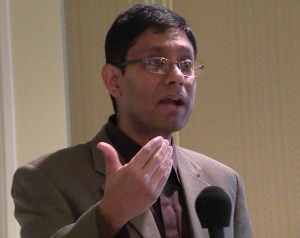 The point of the restructuring has been to focus HP’s research on goals that are more closely aligned with business priorities. That makes it more likely the research will be used in commercial projects inside and outside the company.

“We’ve been in business execution mode on this plan for the past year,” Banerjee said.

Overall, the labs’ budget hasn’t change in a year. HP spends $3.5 billion on research in its product groups, but Labs spends $150 million on fundamental, applied research, and near-term research. The projects are all likely to focus on technologies that are three to seven years away from being products.

While HP has been cutting jobs, HP Labs hasn’t been touched, in part because it started its restructuring on a tighter focus before the downturn hit. While its future is still linked to the company’s own performance, it remains a bastion of the kind of research that isn’t being done at many places in corporate America.

So far, there’s been no move to cut the budget. The major initiatives now include cloud computing, digital commercial printing, sustainability, business analytics, immerse interaction (involving new ways to interact with computers), information management, intelligent infrastructure (such as photonic connectors that use light rather than electrical circuits to transfer data), and content transformation. In the next couple of months, HP and other companies will have more to say about cloud computing, the focus on Internet-enabled server-based computer services.

Banerjee touted HP’s research of memristors, a fundamentally new kind of circuit for semiconductor chips that combines memory with a resistor, and flexible displays as recent advances that can be commercialized. One interesting challenge the team has taken on is using real-time business intelligence, so that, for example, if you’re at an ATM machine, you could get a personalized ad rather than a generic one. Or bank tellers could offer specific advice to you when you get to the counter, rather than greet you as a stranger, said Mohamed Dekhil, research manager. He said that HP has to share business data, while keeping users informed on how their private data is being used or shared.

Banerjee said that Labs executives now review every proposal. If a researcher embarks on a five-year project, the officials will review the project each year if it makes sense to continue. That’s a contrast to the more free-wheeling style of management that existed before.

The company has begun new efforts to transfer technology from research to product divisions or to license it to outsiders, said Labs executive Rich Friedrichs. The point is to get outsiders more interesting in doing complementary research that helps HP amplify its research, effectively “crowdsourcing” research so that more minds work on solving the same problems faster without duplication. However, Banerjee said HP Labs still has its secrets. It doesn’t reveal how it plans to get many of the projects from research to market.

HP funded 41 projects by external researchers at 34 universities who were doing work related to HP’s own priorities. It received 500 proposals from outsiders.