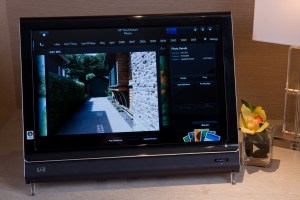 Hewlett-Packard’s Personal Systems Group is launching 50-plus products today in Berlin as it readies its summer and back-to-school line-up for consumers.

The company is launching the products in Berlin because more than half of its $40 billion in annual Personal Systems Group sales are overseas, says John Cook, vice president of consumer marketing at HP.

Cook says the line-up pays attention to design, meaningful innovation, and relentless execution. The attention to the details of design is there, based on my own tour of HP’s line-up. It shows HP get a little something out of its $3.5 billion in annual R&D spending.

Among the ways HP will tout its new gear is through a new reality TV show with MTV, dubbed “Engine Room,” that will tout the art of digital content creation among students in a New York loft. (I hope it’s going to be more exciting than watching somebody use PhotoShop).

One of the new computers is a new worldwide version of the TouchSmart All-in-One IQ500 computer, which has a 22-inch touch screen and has a lot of touch-based applications aimed at making it easy for consumers to initiate tasks such as messages, music playback, or shooting videos with the computer’s built-in webcam. The new $1,299 version is a lot cheaper than last year’s $1,800 version. This one will be available in 13 different countries; that tells you that last year’s U.S. model was successful enough to justify further investment. It will be available in July. 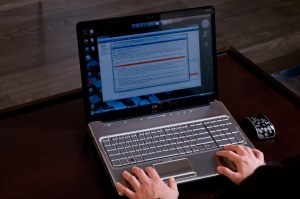 Among the new products are 17 new notebooks. The new consumer and business laptops now come with built-in accelerometers. If you drop them, the sensors inside detect the acceleration and lock down the hard drives to prevent damage.The laptops are also getting a new aesthetic look. Two years ago, HP came out with an imprint finish on the laptops. Now it is infusing its gloss black finish with mesh patterns. The “liquid metal” finish is glossy but doesn’t smudge as easily as the design from two year ago. The laptops are using both Intel and Advanced Micro Devices notebook chips. They will also include eSata ports that you can plug an external hard drive into. Those ports are about six times faster at transferring data than USB ports.

The laptops feature QuickLook 2 for quickly booting to a virtual compartment within seconds. As Windows boots in the background, you can browse the web, watch a movie or play music. That way, you don’t have to wait minutes for Vista to boot.

All of this new stuff is coming out at a time when consumers may not be spending much. But Cook hopes that HP will benefit, since consumers will want to get good value for their money during tough times.