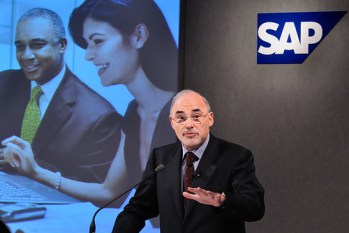 Hewlett-Packard announced this afternoon that Léo Apotheker, former chief executive of the software company SAP, has been elected as its CEO and president by the company’s board of directors.

Apotheker spent more than 20 years at SAP and served as CEO from April 2008 to February 2010. His election follows the resignation of former HP CEO Mark Hurd, who left the company after sexual harassment allegations. Early reports indicated that HP may have been looking at insiders to helm the company, so the selection of Apotheker comes as a surprise.

Robert Ryan, lead independent director of HP’s board, describes Apotheker as “a strategic thinker with a passion for technology, wide-reaching global experience and proven operational discipline – exactly what we were looking for in a CEO.”