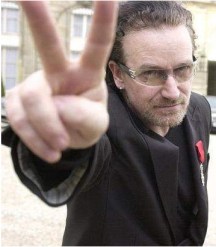 Elevation Partners, the bicoastal private-equity firm famous for sort-of-rockstar investor Roger McNamee and actual rockstar Bono from the band U2, will probably see only a modest $25 million gain on its $460 million investment in Palm, according to the terms of an acquisition announced by HP on Wednesday afternoon.

The Elevation fund, created in 2004 to invest in online multimedia “to help media and entertainment businesses develop and market great content,” as its founders claimed at the time, was deemed a disaster by sharp-tongued blog 24/7 Wall St in March.

24/7 called Bono “the worst investor in America,” an exaggeration that mostly speaks to the high hopes Sand Hill Road had for the overachieving singer and activist. Elevation manages just shy of $2 billion. But the company has failed to pick a hit. Its investment in Forbes Media stalled, with McNamee resigning from Forbes’ board of directors last year as industry-wide loss of revenues dragged the company down with most of the rest of big media.

To be fair to Bono, he’s not the one driving Elevation Partners. Roger McNamee, a long-time Silicon Valley investor, brought in Bono in part because of his celebrity. McNamee focused Elevation Partners on media-and-technology deals, and he knew it would be a brilliant marketing move to have Bono on his team. What better way to have entrepreneurs open their doors to him than offering to have Bono drop by?

Bono clearly wasn’t expected to be running around picking and managing investments. That part was up to McNamee and the rest of the Elevation team. Outside Silicon Valley, Bono is respected for the way he’s run U2, in part by cleverly maintaining ownership of his band’s music rights.

Still, all you really need to know about the state of Elevation’s investment in Palm is: U2’s current world tour is sponsored by BlackBerry.