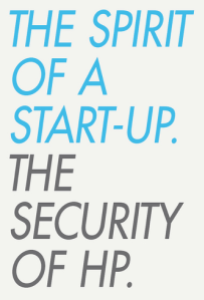 Two weeks after announcing that it might be spinning off its PC business, HP is following through: It just put the business up for sale.

Well, sort of. In what may be a corporate first, the company announced the availability of its division through an advertising campaign and a blog post.

“The new organization would be a $40 billion business with the agility and freedom of a start-up. That’s an exciting prospect,” the post read.

The advertisement tagline is “The spirit of a startup. The security of HP.”

It’s not clear whether the advertising campaign is aimed at reassuring consumers and enterprise customers about the wisdom of buying a PC from a company that’s demonstrated a decided lack of interest in the business, or at touting the value of the PC division to potential acquirers. It might be a little of both.

Of course, in a case of now-classic HP indecisiveness, even the announcement is hedged.

“Keep in mind that nothing has been confirmed except HP’s preference for spinning off the business,” the post says.

That is starting to seem typical for a company that announced its plans to discontinue webOS device production, then reaffirm its commitment to the webOS operating system itself (despite not having enough commitment to make devices for it), then, after seeing how well they sold at the fire sale price of $99, announce that it might start making TouchPads again, after all.

At least they didn’t post the ad on Craigslist.