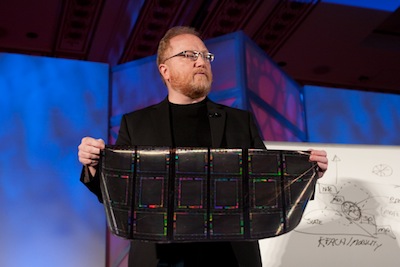 He said in his own blog post he will spend his time promoting his new book, teaching workshops on Killer Innovation, and hopefully taking on board seats and advisory roles at startups “since I will no longer have to worry about conflict of interest or other corporate restrictions.”

While McKinney’s post was positive, his departure will probably be another blow to the executive ranks at HP, which is also losing its longtime chief strategy and technology officer, Shane Robison. HP is in a state of turmoil thanks to a botched CEO hire that resulting in Leo Apotheker getting replaced by Meg Whitman. HP just recently confirmed that it will keep its PC division.

But it’s not surprising that such turmoil at the mother ship is shaking a few things loose from the tree. It’s not clear what McKinney’s departure will mean for any particular technology directions at HP, but McKinney was certainly a passionate techie.

McKinney will stay on through the end of 2011 to meet a number of customer obligations. Carlos Montalvo, who previously reported to McKinney, is the interim CTO for HP’s Personal Systems Group.