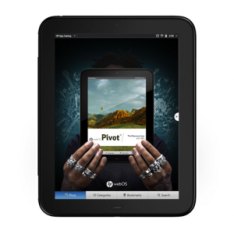 Hewlett-Packard is getting into the magazine business!

The hardware giant is preparing to launch Pivot, a monthly digital publication exclusively offered on its forthcoming TouchPad tablet. Rather than running pure advertorial, the hybrid magazine/app guide will offer visually-driven features, reviews, columns and other content written by professional journalists and guest writers.

At first glance, Pivot appears to be yet another digital lifestyle magazine, but there’s actually a lot more going on. HP says Pivot’s core mission is to show off the TouchPad’s capabilities and developer community, while also educating users about the device’s new webOS app store.

Preaching to the converted through a device-locked publication is an expensive project, but it might be a necessary evil for HP. Last year the the company scooped up smartphone veteran Palm (and its webOS platform) for a hefty $1.2 billion. Since then, HP has been playing catch-up while working to integrate the webOS into mobile devices like the TouchPad.

Now that the TouchPad’s release is imminent, it’s up to projects like Pivot to remind consumers and developers alike that webOS is still alive and kicking.

“We want our partners to experience webOS as the growing platform of opportunity,” said Richard Kerris, HP’s vice president of webOS developer relations in the announcement. “We’re investing in new ways to help market their applications on our platform.”

Of course, Pivot is not a selfless endeavor. Both the unreleased TouchPad and webOS are already well behind powerhouses like Apple’s iPad and iOS in sales and marketshare. And while the iOS and Android app stores are steadily developing digital publishing prowess, webOS is in for an uphill climb — both as an app platform and as a viable outlet for digital publications.

Pivot is slated to hit digital shelves on July 1st alongside the TouchPad.