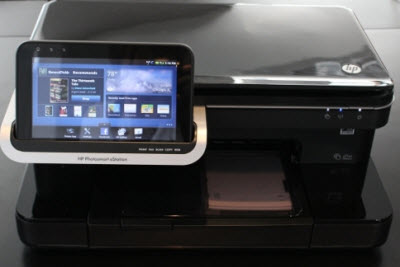 For some strange reason, HP is still really hot on the idea of mating webOS with its printers — to the point where it has become a crucial part of its negotiations to sell off its Palm assets.

In addition to settling on a good price for the Palm goodies, HP is also demanding that potential buyers license webOS back to it on the cheap for use in printers, a source with knowledge of the negotiations tells VentureBeat.

As for the status of the Palm sale, which includes webOS and Palm’s lovely treasure trove of patents, our source says that Intel has just begun discussions with HP. Our source also says that Qualcomm is still in the running for Palm, but the company has adamantly denied previous rumors about the deal.

Now I’m all for more innovative printers from HP, but it seems like a strange demand when the company is losing money every day it continues to hold on to webOS. (Pictured above, HP’s inexplicable printer/Android tablet combo.) HP paid $1.2 billion for Palm last year, and it revealed in its earnings report today that it spent another $1.66 billion just to wind down its webOS business, as AllThingsD points out.

HP has said previously that webOS could eventually make its way to printers and PCs, but now with a Palm sale imminent, it seems strange for the company to hold true to that initial promise. I can’t imagine that many consumers are chomping at the bit for webOS-enabled printers, and much of the benefit from using webOS as the basis of printer software — including ease of development and potential third-party app support — could be seen by jumping to Android.

Then again, it’s possible that HP has webOS printers near completion, so by licensing the software it’ll still be able to move forward with those products. Given that no major printer competitors are aiming for Palm, a potential buyer shouldn’t have any problem licensing webOS to HP (though that depends on how cheap HP’s demands are for the licensing fees).

And what of Amazon? In September we reported that Amazon was in deep negotiations to snap up Palm, but it’s unclear if that’s still the case now. I still think Amazon would be a good fit for webOS — definitely more so than other alternatives like Intel, Qualcomm, or, God forbid, RIM — because it would be able to take advantage of Palm’s software in future tablets. And of course, it wouldn’t hurt for Amazon to be sitting pretty with Palm’s patents.