Hewlett Packard is working on a display with a really wide screen. Phil McKinney, chief technology officer at the Personal Systems Group at HP, showed off the concept for the screen at the DisplaySearch Emerging Technologies conference this week in San Jose, Calif. 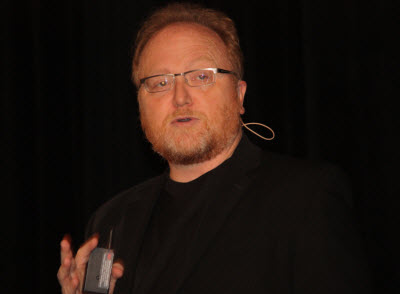 The screen is so wide that you can see an entire pro basketball court at the same time. McKinney (pictured right) referred to the screen as a “triple wide high-definition” screen that is created by stitching together images from lots of different cameras pointed at slightly different parts of the same scene. The company is working with the National Basketball League to develop truly immersive screens that make you feel like you’re there on the sidelines.

“We can literally create the Jack Nicholson seat,” McKinney said, referring to the courtside seat that actor Nicholson has had for more than three decades at Lakers games. “You get a fresh, seamless experience. You can see end to end, the entire width of the court.”

Those tickets cost Nicholson an estimated $2,500 per game. Right now, Nicholson probably gets a better deal, since HP surely can’t sell a triple-wide screen for less than $2,500. (You can, however, use it for more than just one basketball game viewing.) Clearly, it’s going to look better than our picture above, which was taken from McKinney’s slide presentation at the conference. 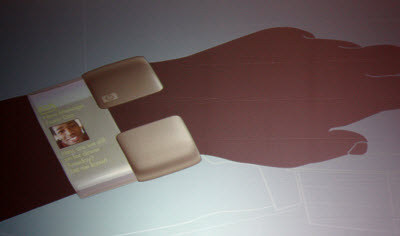 The screen is just one of a number of screen technologies HP is working on. The company was initially making big screens for demonstration purposes, but customers began asking to buy them, and so now HP is a big player in the interactive displays market.

You can’t, obviously, control a triple wide screen using touch controls. You’d have to walk from one end of a long screen to another to do so. That’s why HP is also working on gesture-control or voice-control technology. HP’s current Touchsmart PCs have hidden “easter egg” controls in them, developed by coders in India, where you can do combination voice-touch commands. These multi-modal controls are a new way to control an immersive screen.

McKinney also showed off a concept of a Dick Tracy-style video screen watch. The watch is an experimental “convergence” device with messages and a video screen so you can see who you are talking to. It also synchronizes with devices that you walk up to. HP created it a few years ago as a prototype, but McKinney said he was surprised when a manufacturer came back to him a few months ago and showed it could manufacture the device as described.