Developer loyalty can make or break a new platform — like virtual reality. And this year, developers are favoring the HTC Vive VR headset, just barely, over the Oculus Rift, according to a new poll for the upcoming VRDC conference.

The VRDC tried to gauge which headset was most popular among developers making VR games. The HTC Vive edged out its rival, getting 48.6 percent of the vote, compared to 43.2 percent for the Oculus Rift. The Samsung Gear VR came in third at 33.8 percent, followed by Google Cardboard at 29.2 percent.

Among the weaker platforms were Google Daydream at 14.6 percent (it’s also one of the newest VR platforms), the Sony PlayStation VR (there are a lot fewer console game makers) at 12.9 percent, and Microsoft’s HoloLens at 8.8 percent. In last place was Google Tango at 7.3 percent. To me, this suggests that Google ought to consolidate its efforts or put a lot more effort into developer marketing — or just come up with something more appealing. 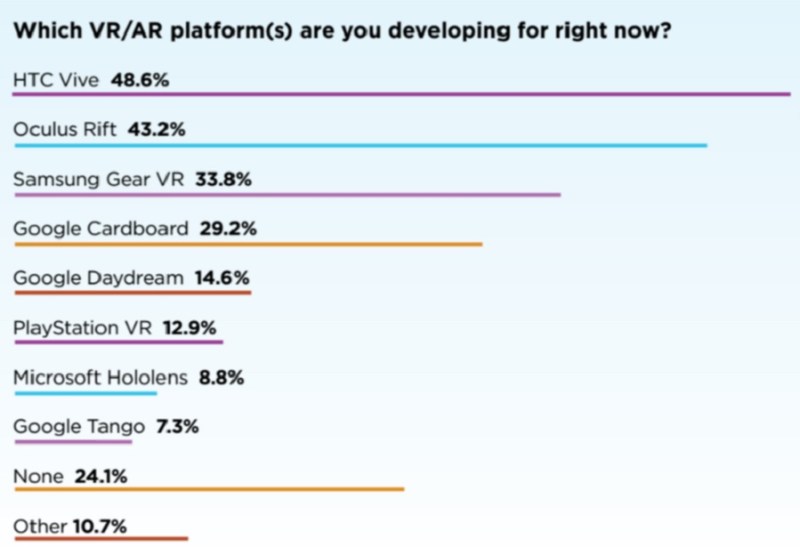 Above: VRDC poll shows that the HTC Vive and the Oculus Rift are the favorites among VR developers.

Looking ahead, developer interest in the Vive and the Rift remain high, but it looks like Google’s inexpensive smartphone-based VR/AR platform, Cardboard, is proving more popular than Samsung’s Gear VR headset.

When asked to pick the one VR/AR platform they planned to develop their next title for, 34.6 percent of respondents chose the HTC Vive. Another 23.4 percent went with the Oculus Rift headset, and 14.0 percent favored Google Cardboard.

But a large number of respondents skipped the question, which suggests that they weren’t confident about their next project, or whether they would do one at all.

The survey also asked whether the developer’s next title would be exclusive to a single VR/AR platform — and the results were surprising.

The majority of those surveyed, 78.1percent, said that their next project would not be released exclusively on a single platform. 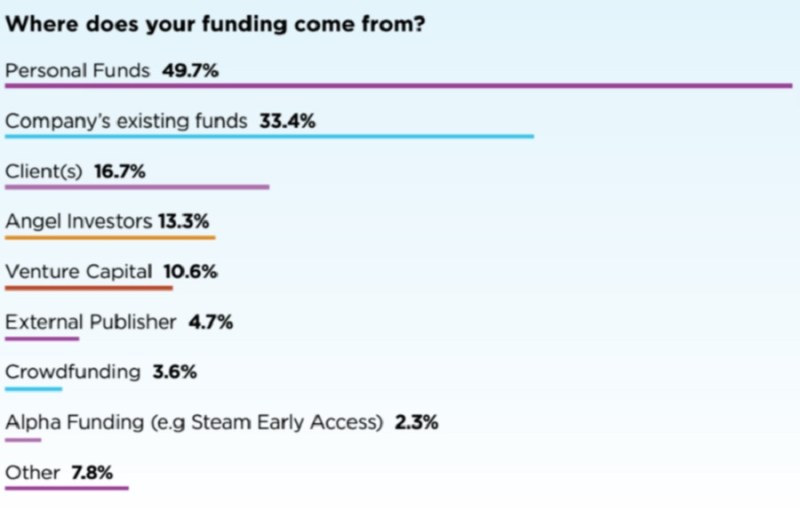 Above: Nearly half of new AR/VR projects are self-funded.

As for the sources of money, 49.7 percent of those surveyed said that some or all of their funding comes from their personal funds. Another 33.4 percent said it came from their company’s existing funds.

Among the fears listed in the write-in portion of the poll, VR/AR professionals worried about the risk of bad, nausea-inducing VR/AR experiences turning off people who might otherwise be enthusiastic about the technology.

“Nausea — when someone has a bad experience, you have lost them forever,” wrote one respondent. “[It’s] too easy to have [a] bad experience.”

“Price and nausea,” wrote another in response to the same question. The Virtual Reality Developers Conference takes place Nov. 2-3 at the Park Central Hotel in San Francisco.