In the latest in a series of blows to HTC, the company is to be removed from the Taiwan Stock Exchange’s FTSE TWSE Taiwan 50 Index, effective September 21, according to local media reports Sunday.

That said, HTC will remain on the FTSE TWSE Taiwan Mid-Cap 100 Index.

As to the significance of the Top 50 index, it comprises the most highly capitalized blue chip stocks and represents nearly 70 percent of the Taiwanese market, according to FTSE Group. By comparison, the Mid-Cap 100 index only represents about 20 percent of the market.

The news comes just days after the troubled Taiwanese smartphone maker — already in the midst of a major business realignment program, which will see it slash 15 percent of its workforce — reported its lowest monthly revenue in eight years for the month ending August.

HTC’s listing on the exchange is expected to be replaced by Eclat Textile, an elastic functional fabric product provider that has seen its shares jump as much as 55 percent so far this year, the reports said.

While local media attributed the announcement to TWSE, the exchange doesn’t appear to have put up a release on its website, suggesting the announcement may have come over local broadcast media or by some other means.

The news will certainly come as a blow to HTC, which on Monday said that 600 factory jobs are to be axed at its Taipei and Taoyuan locations. Meanwhile, if rumours are true that the company is also planning to sell a Shanghai unit — which it has to date denied — then it’s possible we’ll see more cuts there, too. 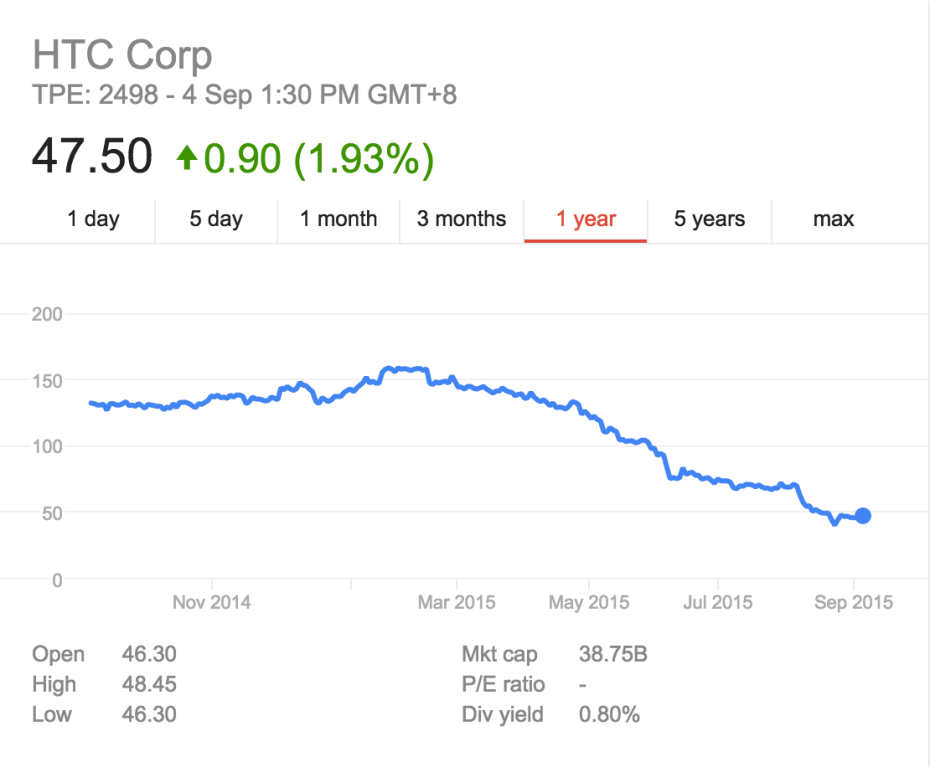 Above: HTC’s stock performance over the past year. Source: Google Finance

A leaner HTC is currently trying to focus on its core product lines: high-end smartphones, connected devices and wearables, and is making a move into virtual reality with its Vive headset (which was recently delayed).

The VR push just saw the company’s cofounder, Peter Chou, announce plans at the end of August to join the board of a Hong Kong-based visual effects studio.

HTC’s stock has fallen more than 95 percent since its peak in April 2011, with one report from Bloomberg last month summing up just how dire the company’s situation has become:

A 60 percent plunge in HTC’s stock this year pushed its market value to below its cash on hand. That means investors were effectively saying the smartphone maker’s brand, factories and buildings were worthless.

In that report, Bloomberg cited Birdy Lu, an analyst with Deutsche Bank AG, as saying, “We think these [cost-cutting] efforts are not enough to turn HTC around in the next two years. HTC has little chance to compete with iPhone and Samsung given limited resources, and might continue to lose shares to Chinese brands in mid/low-end segment.”

We’ve written before about how Chinese smartphone makers like Xiaomi are squeezing other players out of the market.

We’ve reached out to HTC for comment, and will update you if we hear back.