HTC has one of the flagship virtual reality headsets with the HTC Vive, and now it is creating first-party content for that platform. The Taiwanese company is announcing today that its Vive Studios division is launching Arcade Saga, a title developed internally by its 2 Bears Studios.

Arcade Saga is a collection of three games that use the Vive’s room-scale VR (which is the capability to move around in a room and actively interact with the VR landscape), said David Sapienza, one of the game’s creators at 2 Bears Studios. The idea is to stoke the VR hardware platform by creating content that will help sell it over time, said Joel Breton, head of the HTC Vive Studios division. VR could grow into a $14 billion consumer software market by 2020 — even as sales lag from 2016’s earlier projections — but platform owners such as HTC have to keep pumping money into it in the early days to make sure the ecosystem takes root.

Arcade Saga is available now for $30 on Steam for the HTC Vive. It will also be available in China on Viveport, HTC’s VR app store.

Arcade Saga is the first of what could be dozens of games over the next year, Breton said. He said the internal studio has more than 50 employees so far, and it is hiring quickly. Breton is talking about the studio today at the VRX event in San Francisco. 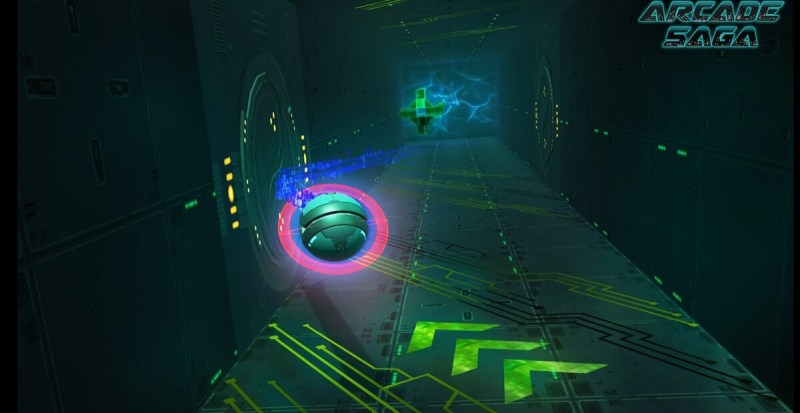 Breton said that Vive Studios would act like a first-party publisher, much like Microsoft and Sony have their own internal studios to make games for their own platforms, the Xbox and the PlayStation.

“This is a new pillar in HTC’s drive to create content and growth for the hardware,” said Breton, a vice president of content of VR. “Arcade Saga is a love letter to classic arcade games.”

Above: Arcade Saga has a mini game dubbed Fracture.

Vive Studios is actively creating content across key categories for VR including games, education, cinematic, design, social, real-estate and sports as well as tools and applications that can revolutionize areas such as media, retail, health care, and location-based entertainment centers and arcades.

“The VR ecosystem needs a persistent flow of exciting experiences and triple-A content that can help grow our audience,” Breton said. “We’re excited to mark our launch with the debut of our first internally developed title ‘Arcade Saga’, a game that represents the kind of deeper and more challenging experience we believe VR enthusiasts are ready to embrace.” 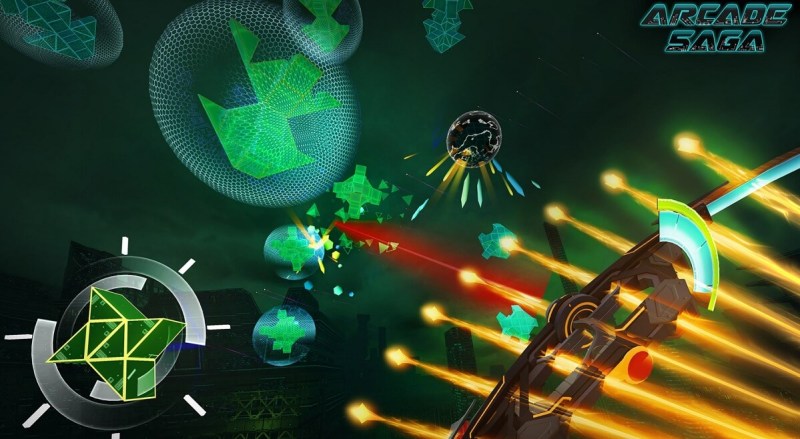 Above: Bowshot is an archery mini game in Arcade Smash for the HTC Vive.

I tried out the colorful Arcade Saga on the Vive yesterday. You have to take on artificial intelligence threats developed by humans. In a minigame called Fracture, you have to take a ball in one hand, using the Vive’s touch controller, and then hold it in your hand. Then you take a bat in the other hand and whack the ball. It bounces off the walls, and each time it hits a wall, you can score points. You can hit the ball at color blocks, but it feels like Breakout inside a 3D environment, where the bricks surround you.

The second minigame, Smash, takes place in a corridor, where you have two shields in your hands. You have to smash your shield into a ball and make it spin wildly to get it past the A.I. entity on the other side of the corridor. You play this kind of corridor tennis back-and-forth until either side scores the most points. You can juice your chances by pulling a trigger and slowing down the ball as it approaches you. But your opponent can mess you up by sending missiles at you.

The third minigame is Bowshot, where you hold a bow in the touch controller in one hand and then notch an arrow to it with your other hand. You then shoot at blocks and other objects coming at you. I fought a boss battle where I had to fire high-powered arrows at a floating and rotating block, trying to get bullseyes on it while it was sending objects back at me.

The game has both difficult modes and easy, or “fun” modes. You can upgrade multiple levels, gaining new weapons and abilities.

“We wanted to create a game that reminded us of the fun in the arcades,” said Jason Epps, creative director at 2 Bears Studios. 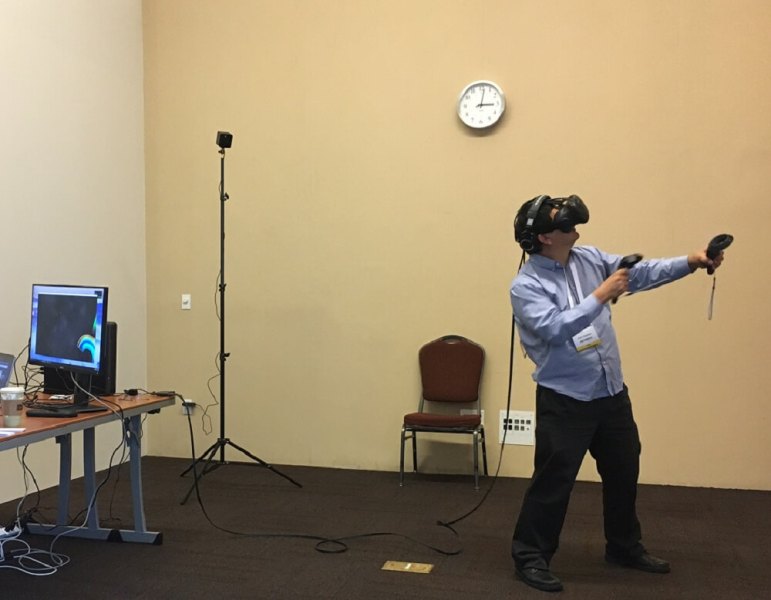 Above: Dean Takahashi of GamesBeat plays Arcade Saga on the HTC Vive.