When Huawei finally unveiled the latest addition to its flagship smartphone lineup yesterday there were few surprises, given the many leaks in the buildup to the big day. The one thing everyone was talking about ahead of the launch event in Munich, however, was how Huawei planned to circumvent the gargantuan elephant in the room: a blanket ban on Google’s apps and services.

By way of a brief recap, Huawei was placed on a U.S. trade blacklist earlier this year that prohibits all U.S. companies from doing business with the Chinese tech giant. This meant Huawei could not use software from companies such as Google on future phones, though existing devices would still receive software updates. In effect, this ban seemed likely to push Huawei toward the open source version of Android for its new smartphones, meaning no Google Play, Gmail, YouTube, Maps, or other Google services Android users have become accustomed to.

Ahead of yesterday’s event, Google confirmed that — as expected — the Huawei Mate 30 lineup would not feature its services. However, there remained an air of doubt, with speculation that Huawei would somehow produce a magical workaround out of thin air. On stage during yesterday’s press conference, Huawei’s consumer tech CEO Richard Yu performed a big song and dance over the amazing hardware in the new flagships, but he curiously made almost no mention of the operating system that would be shipping with the Mate 30 and Mate 30 Pro devices.

Similarly, in the wake of yesterday’s launch event, none of the official press materials made mention of Google or the lack of apps, and such information is also conspicuously absent from the phone’s official home on the web. This all provides us with an important clue to Huawei’s plan for addressing the billion-dollar Google problem: Keep as quiet as possible about it, and focus instead on the hardware and alternatives to Google’s services.

“This is the best-performing smartphone in the world,” said Yu in a press briefing, before briefly acknowledging the question on everyone’s mind. “Yes, we have some limitations on Google mobile services. But we have a huge advantage with the phone itself.”

Rather than shipping with Google Play, Huawei will focus on its own App Gallery store. Here, users will be able to install popular apps, such as WhatsApp, Instagram, and Facebook, but countless other category-leading apps for work and leisure will be absent, including Dropbox, Uber, Slack, Spotify, eBay, Strava, Tinder, and Netflix. 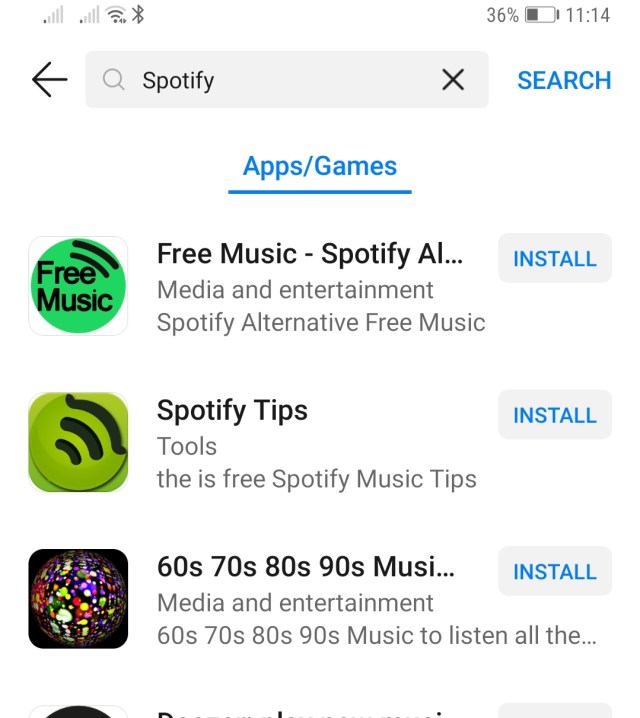 Above: Spotify on Huawei’s App Gallery… oh wait, no it’s not.

By underplaying the Google factor, and the lack of apps across the board, Huawei raises the real risk that people will buy or upgrade to the new Mate 30 series without realizing that they won’t be able to access Google’s hugely popular services out of the box, not to mention the dozens of other third-party apps they’re accustomed to. Many consumers will, of course, do their homework, but equally many won’t — they’ll be offered an appealing upgrade as part of their contract and assume it is effectively the same phone but with a better camera.

To put it another way: Will a 25-year-old, who typically listens to Spotify in their Uber ride to meet their Tinder date (while intermittently checking in on work through Slack and Gmail), be happy to discover that their $1,000 phone isn’t up to the task?

Huawei can talk about how good its camera is until the cows come home, but without the apps, impressive specs only go so far. You only have to look back to Windows Phone for precedent. Microsoft and Nokia produced some truly great hardware in the form of Lumia phones, but they were doomed in large part by the app ecosystem failing to take off.

It’s worth noting that there are workarounds to Huawei’s Google problem. It’s possible to sideload apps, and users can access some of the services relatively easily through their browser, while alternative apps may work just fine in other cases. But this all amounts to huge friction and a sub-par experience. When people are shelling out around $1,000 for a device, they want it to work as expected.

Based on all the images and videos released so far, the new Mate 30 devices look pretty stunning, and they pack an impressive list of features. But for most consumers, it’s what on the inside that counts in the long run.

So how will Huawei market the device when it actually goes on sale in the coming weeks? Will the phones come packaged with an “Intel Inside”-style note that says something like “No Google inside”? Will salespeople be instructed to caution buyers that the Mate 30 phones pack very different apps from last year’s Mate 20 series? These are important questions, because transparency is pivotal to retaining consumer trust.