If you think Huawei is still relatively unknown in the U.S., you’d probably be right. At least, it’s still not a household name among the general non-techie population. But you may be surprised to learn that it’s not exactly well-known in Asia outside its home turf of China, either. Not yet.

All signs, though, point to 2016 being the year when that starts to change for Huawei. The 2015 launch of the Huawei-built Nexus 6P really did a lot to raise its profile globally, especially in the U.S. 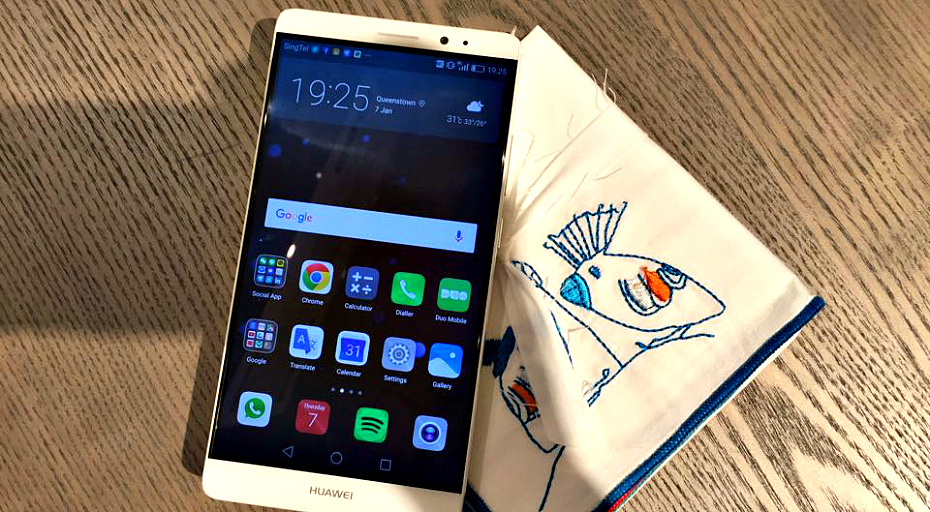 While Xiaomi is the Chinese brand that has, until now, stolen most of the limelight from international tech media — often at the expense of Huawei and Lenovo — I think it’s fair to say that the tide is beginning to shift a little more in Huawei’s direction. Xiaomi, meanwhile, has been faced with unexpected setbacks and likely missed its own 80-million-unit sales target last year.

Huawei’s new 6-inch flagship, which launched internationally this week at the Consumer Electronics Show (CES) in Las Vegas, is called the Mate 8, and it’s certainly generated a good amount of buzz. That’s despite the fact that it’s not even available in the U.S. yet, with its “global” launch largely limited to Europe, Australia, the Middle East, and Mexico. It launched in China back in November. 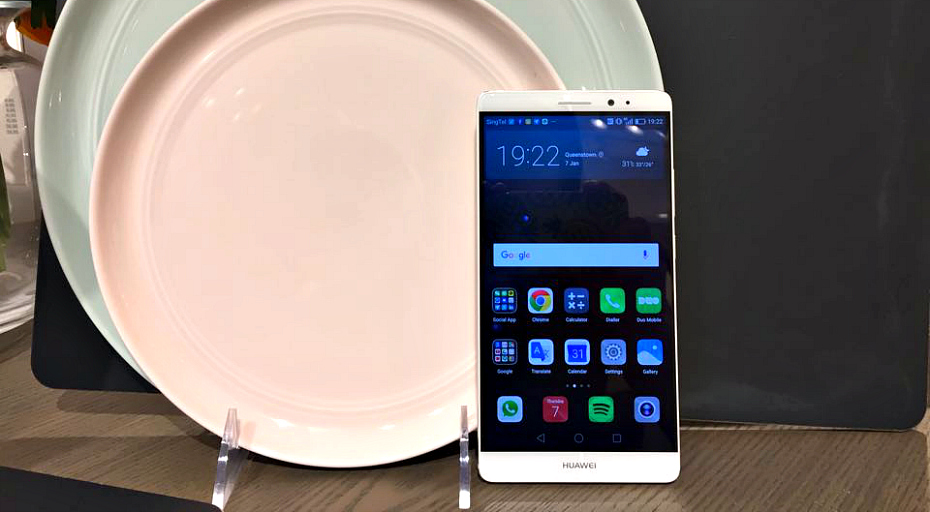 I’ve spent a couple of weeks with the Mate 8 over the holiday period and into the new year, and while Huawei has produced a solid, premium-feeling Android smartphone, I can’t find a single reason why I’d recommend it over other widely available phablets like the Nexus 6P, the Moto X Pure, the gorgeous OnePlus 2, the Samsung Galaxy Note 5, the LG V10, or even the Sony Xperia Z5 Premium with a 4K display. All retail at price points under or similar to the €600-€700 Huawei Mate 8 (based on its European pricing). Heck, you can even pick up an iPhone 6 Plus at these prices.

But, if you’re dead set on making this the year you check out a smartphone from a Chinese OEM, it’s probably still worth waiting until February to see what Xiaomi has in store with its delayed Android flagship, the Mi 5. Yes, that will be a smaller phone — probably no larger than 5.5 inches — but it’s expected to retail at under $500 and will likely pack a better screen than Huawei’s. The other obvious contender from China is the OnePlus 2, as I’ve already mentioned. 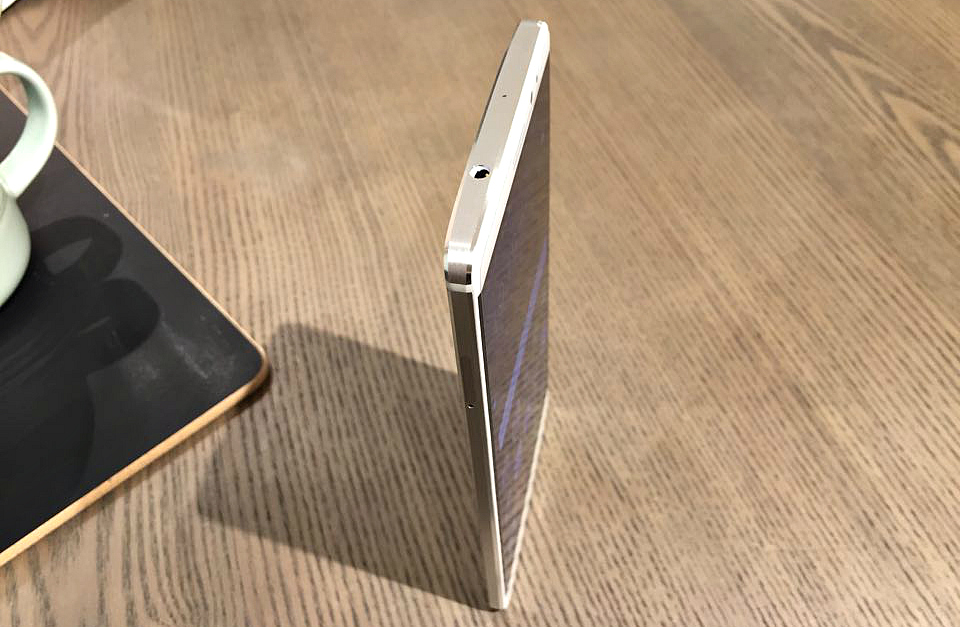 The first thing you’ll notice when you pick up the Mate 8 is that it feels premium. Its 7.9mm-thick, all-metal unibody design weighs in at 185g — Huawei says it’s “aerospace grade aluminum metal” — with chamfered edges and an 83 percent screen-to-body ratio. That means it has extremely thin bezels and actually manages an impressively small device footprint, considering the 6-inch full-HD display.

At 367 PPI, it’s not the best screen around (the upcoming Xiaomi Mi 5 is expected to have between 550-600 PPI), though contrast and viewing angles are good. Some have complained about a slight blueish tint to the display. The screen curves slightly at the edges, but that’s not as prominent as on the iPhone 6. With Corning Gorilla Glass 4 hopefully protecting it from careless drops, it’s certainly not a screen I’d complain about using day-to-day. But it also wouldn’t be my first choice. 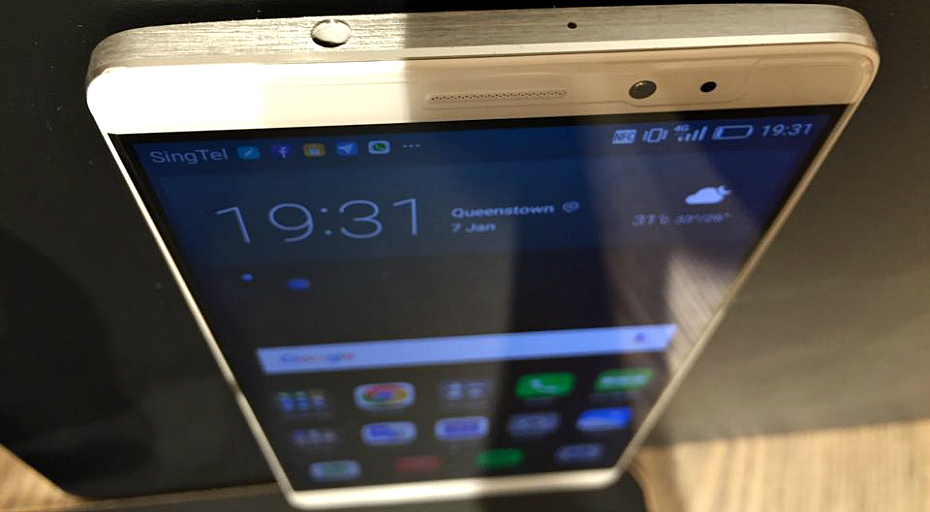 The outside of the phone is largely predictable. Volume rockers are under the power button on the right, a dual-SIM card slot is on the left (one slot doubles as a micro SD slot, expandable up to 128GB). Down below are speaker grills and — perhaps disappointingly for 2016 — a microUSB port instead of USB Type-C for charging.

Up top is a standard 3.5mm headphone jack. Round back is Huawei’s much-improved circular fingerprint scanner, which we saw on the Nexus 6P (the one on the previous generation Mate 7 was square). It’s fast and certainly comparable to the one on the iPhone 6S, except that it scans the index finger instead of the thumb. Another use: triggering the camera shutter. 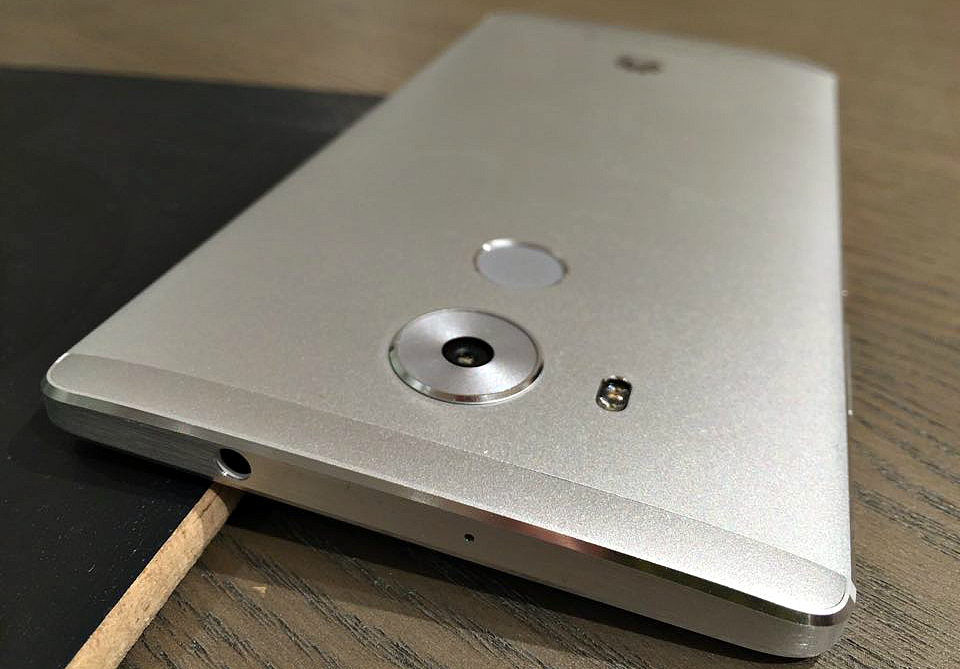 As for cameras, the main shooter round back is a 16MP Sony sensor with an f/2.0 aperture, dual-flash, and three-axis optical image stabilization. The front-facing camera is 8MP, and offers a “beauty algorithm for taking the perfect selfie.” We’ve seen a big focus on selfies from a range of OEMs last year. Huawei says it invested $98 million over three years to develop “the first proprietary image sensor processor for faster focusing, higher clarity, and more accurate color shading.”

That’s all well and good, but in my experience the cameras are just decent — good enough for every day use, but not the best on the market. They’re also far from bad or inadequate. Here are some example shots in a range of lighting conditions that I took in Singapore this week (sorry, no selfies included):

The camera software comes with all the features you’d expect of a flagship Android smartphone in 2015/16, including a professional/manual mode that allows you to tweak all sorts of levels. Unfortunately, it doesn’t shoot in 4K, but it does have time-lapse and a range of filters. In my use, it snapped pictures fast and reliably, and I don’t really have any gripes with the camera hardware or software. 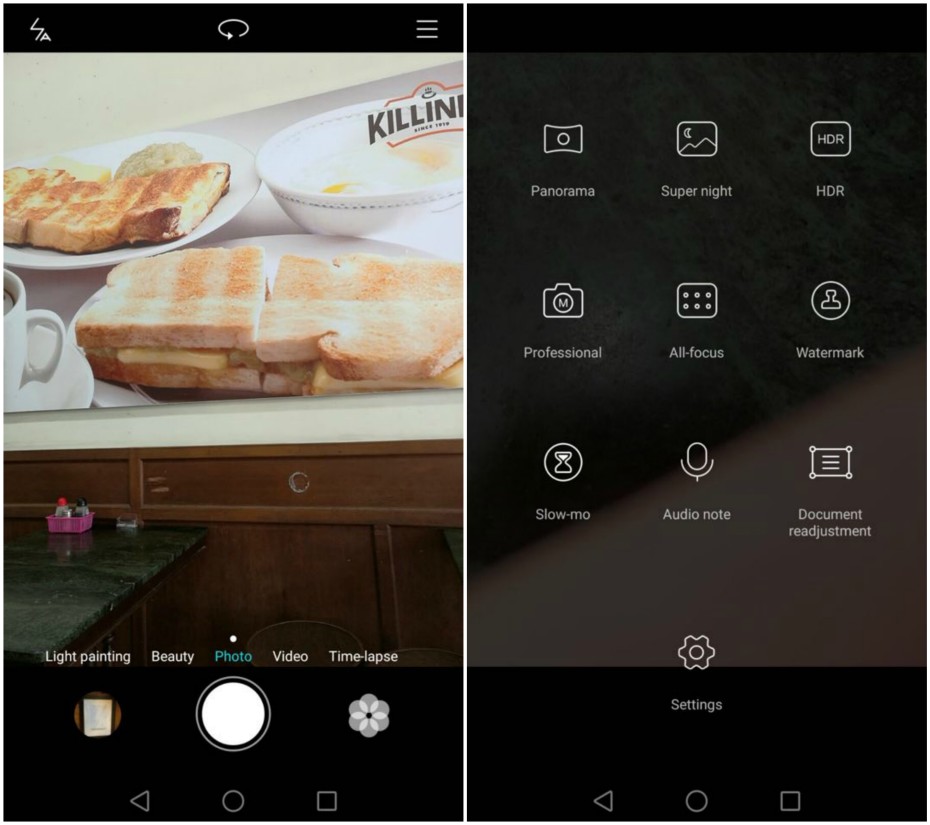 The Huawei Mate 8 comes in two versions: 32GB with 3GB of RAM and 64GB with 4GB of RAM. It also comes in four colors: Champagne Gold, Moonlight Silver, Space Gray, and Mocha Brown. It’s running on Huawei’s own HiSilicon Kirin 950 octacore chipset that was unveiled back in November, with four high-power Cortex-A72 processors running at 2.3 GHz, and four low-power Cortex A53 processors running at 1.8 GHz. Graphics are handled by a Mali-T880 processor. In my use, the phone is snappy and lag-free, even with Huawei’s heavily skinned version of Android 6.0 Marshmallow — which it calls EMUI 4.0 (more on that after). Game performance is excellent.

The 4,000mAh battery is impressive as heck, easily getting you through two full days of light-to-normal use. Even on heavy use, you’ll likely have juice left over after a full day. Its quick-charge functionality tops up 37 percent in 30 minutes. Meanwhile, the new Kirin processor, which Huawei says boosts power efficiency by 70 percent (compared to the Kirin 925 that we saw in the Mate 7), and the fact that it’s not pushing a 4K display (like an increasing number of phones are this year) really helps conserve power. Google’s new Doze feature, which it baked into Android Marshmallow, also helps by putting the phone into a “deep sleep” state to conserve power when it’s not being used.

EMUI 4.0 gets rid of the app drawer, instead showing all your apps and folders on the home screens. Xiaomi’s custom Android skin, MIUI, also does this. It’s probably a discreet nod to Apple, in a market where iPhones are still seen as the most premium offering (yes, I’m talking about China). As you’d expect, there are a bunch of ways you can tweak the look and feel of EMUI by playing around in settings.

While I don’t think EMUI completely butchers Google’s efforts with Marshmallow, it certainly isn’t my cup of tea. App icons are squared-off (also like Xiaomi), and folders display in grid view (instead of stack) by default, so there can appear to be lot of empty space on the home screens if you only have a couple of apps in a folder. And just to rant real quick, I found it frustrating that Huawei won’t let you swipe down to check notifications from the lock screen if a passcode is set. 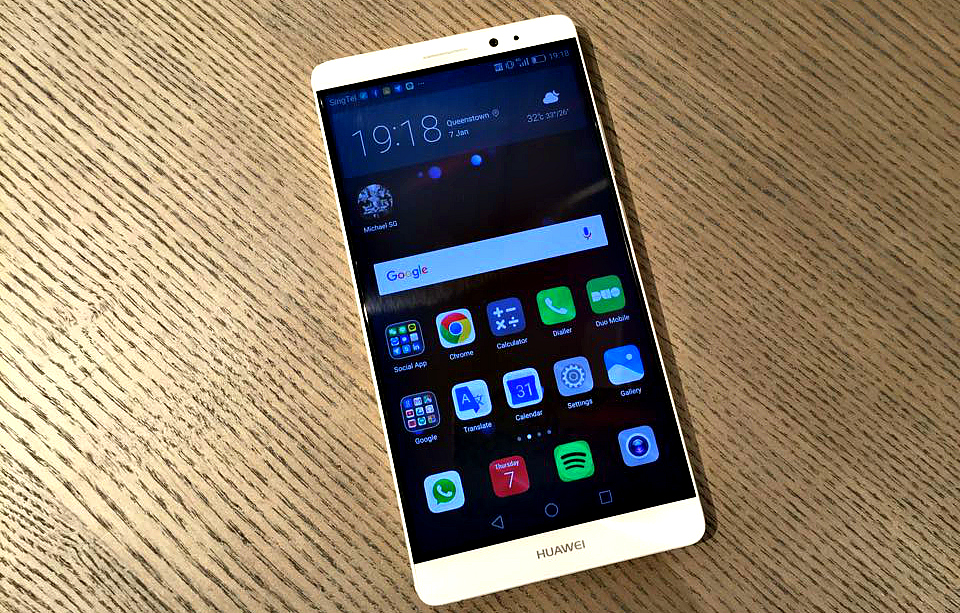 That said, it’s not all bad, and if you’re not too much of an Android purist, you may not mind. Huawei has a cool recording app that allows you to directionally control audio input (and output in playback) by manipulating levels on the three microphones. While this is clever and potentially useful, it remains to be seen whether people actually end up using it. EMUI 4.0 also comes with a “built-in automatic defragmentation service,” which is really just a pre-loaded version of Clean Master that you can simply uninstall if you wish.

In all, Huawei says it’s made “hundreds of user experience tweaks and improvements”. (I hope it means improvements over EMUI 3.0, rather than Google’s stock design. It would be easy to agree with the former — but much harder, if not impossible, to agree with the latter claim.) In any case, if you really don’t like what Huawei has done with EMUI 4.0, you can always install a custom launcher like Nova. There is a split-screen mode that I didn’t find myself using, and multitasking feels like it’s taken a step backwards from the new card-stack layout that Google introduced in Lollipop — instead, Huawei has opted for a horizontal side-by-side layout. 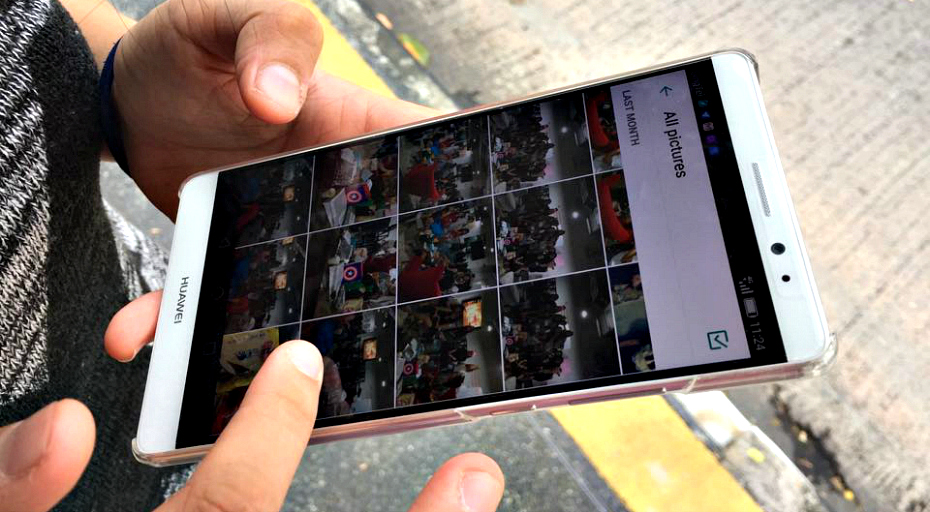 Ultimately, while it’s hard to fault the Mate 8 on paper — it’s a solid, if expensive, phablet that does the job — I still don’t find myself particularly excited about it. In today’s day and age, the spec war is largely over, and smartphone makers are staging battle on more of an emotional playing field. Is there something that makes me want to reach out and touch the phone, to pick it up and use it even if I’m not trying to do anything in particular? Is it just a thrill to use or look at?

For me, the Mate 8 doesn’t quite achieve any of that. By comparison, devices like the Nexus 6P or the OnePlus 2 do achieve that mysterious, intangible quality that keeps me excited about smartphones, even as much of the industry shifts the discussion to the IoT push by brands like Samsung and LG, or to insane concept cars and collision-avoidance drones.

Should you buy the Mate 8? Probably not. Is it a disaster if you end up with one as your daily driver? Again: probably not. I just don’t know why you’d want to, given the rest of the offerings available on the market today — ironically, including Huawei’s own Nexus 6P. 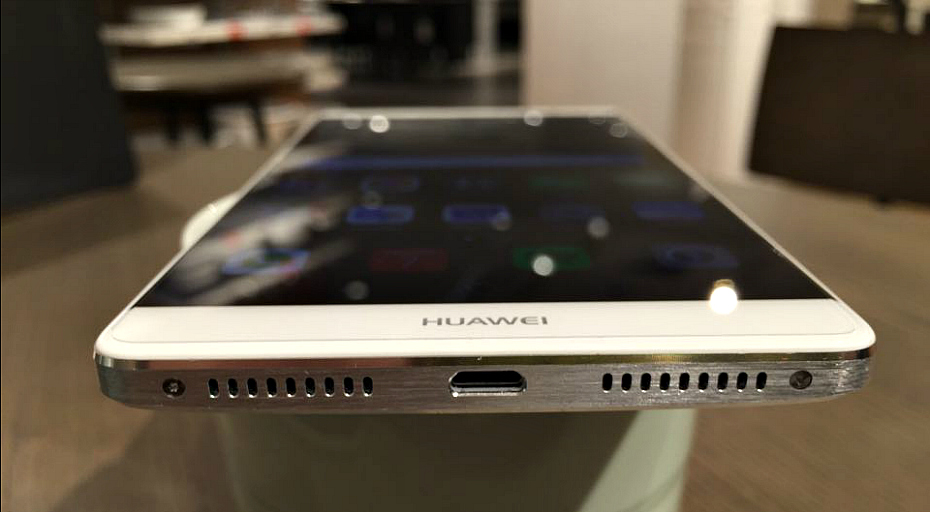 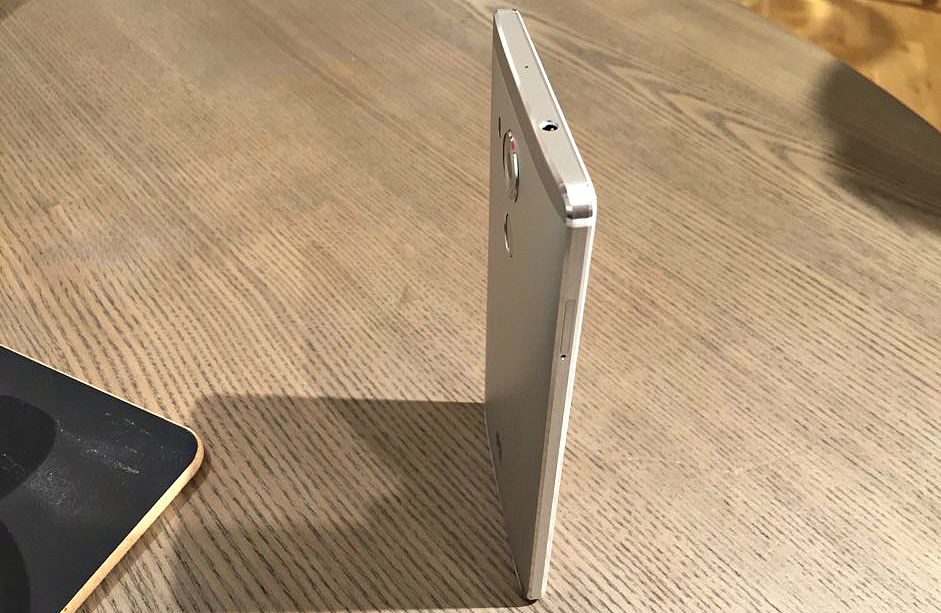 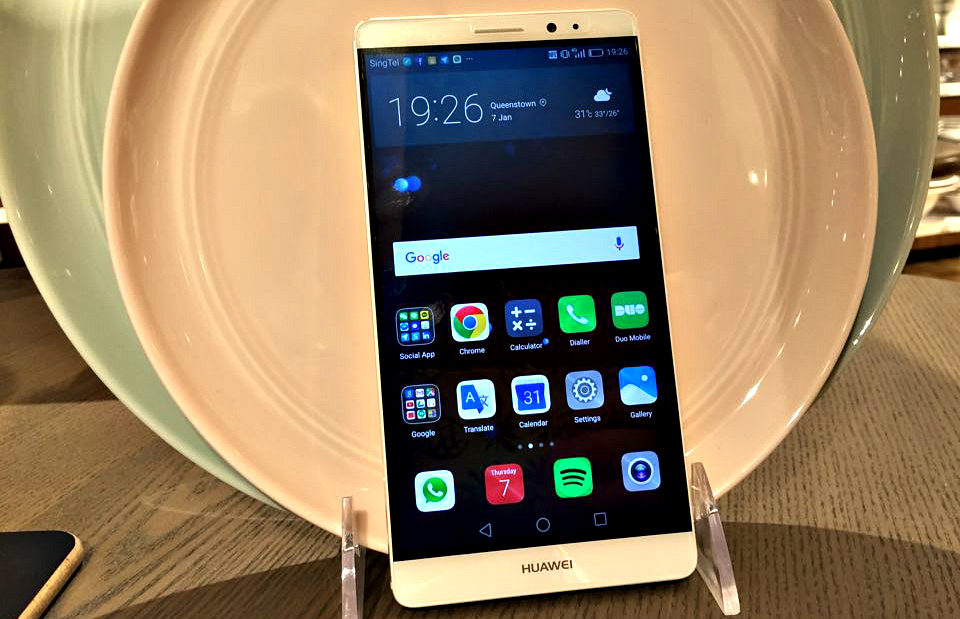