Huawei today formally announced the Mate X, its long-rumored foldable smartphone that can deliver 5G speeds and is currently targeted at people who want a better experience when doing things like watching movies on the go.

Huawei unveiled the Mate X for reporters yesterday in a preview session that was followed by the launch event today. The fanfare comes on the eve of MWC Barcelona 19, the massive telecom trade show that officially kicks off Monday.

The reveal of the Mate X comes a few days after an event by rival Samsung, which showed off its own 5G foldable Galaxy Fold smartphone. Foldable phones are expected to be one of the big themes at MWC Barcelona 19 as the industry searches for the next breakthrough idea to try to reignite slumping handset sales.

In brief remarks to reporters yesterday, Huawei executives sought to play up advantages the company has when it comes to developing next-generation products for 5G networks, a message that also contains a subtle jab at countries grappling with whether to ban the company’s products over security concerns.

The world’s leader in selling telecom gear, Huawei has also made a big push in the consumer space over the last several years, introducing laptops and developing higher-end smartphones. It’s now ranked second in global sales of smartphones, behind Samsung and ahead of Apple, even though it hasn’t managed to find a way to enter the U.S. market in a meaningful way. At the launch event today, Richard Yu, CEO of Huawei’s Consumer Business Group, noted that the company sold 4 times as many laptops in 2018 as 2017.

As for smartphones, Huawei has its own launch event scheduled for late March in Paris, where it is expected to announce the new version of its real flagship phones. The Mate X won’t go on sale until at least June, Yu said, and acknowledged that the device isn’t likely to become a mainstream product for some time, given the early-stage rollout of 5G networks.

More problematically, toward the end of his presentation Yu somewhat bashfully unveiled the starting price of the Mate X: a staggering €2299 or $2,600. Yu said there is still a lot of work to do on the technology to bring the cost down and work with carriers to get it ready for regular use.

In fact, the Mate X is most likely intended to create a little buzz and offer a glimpse of where the mobile industry is heading. 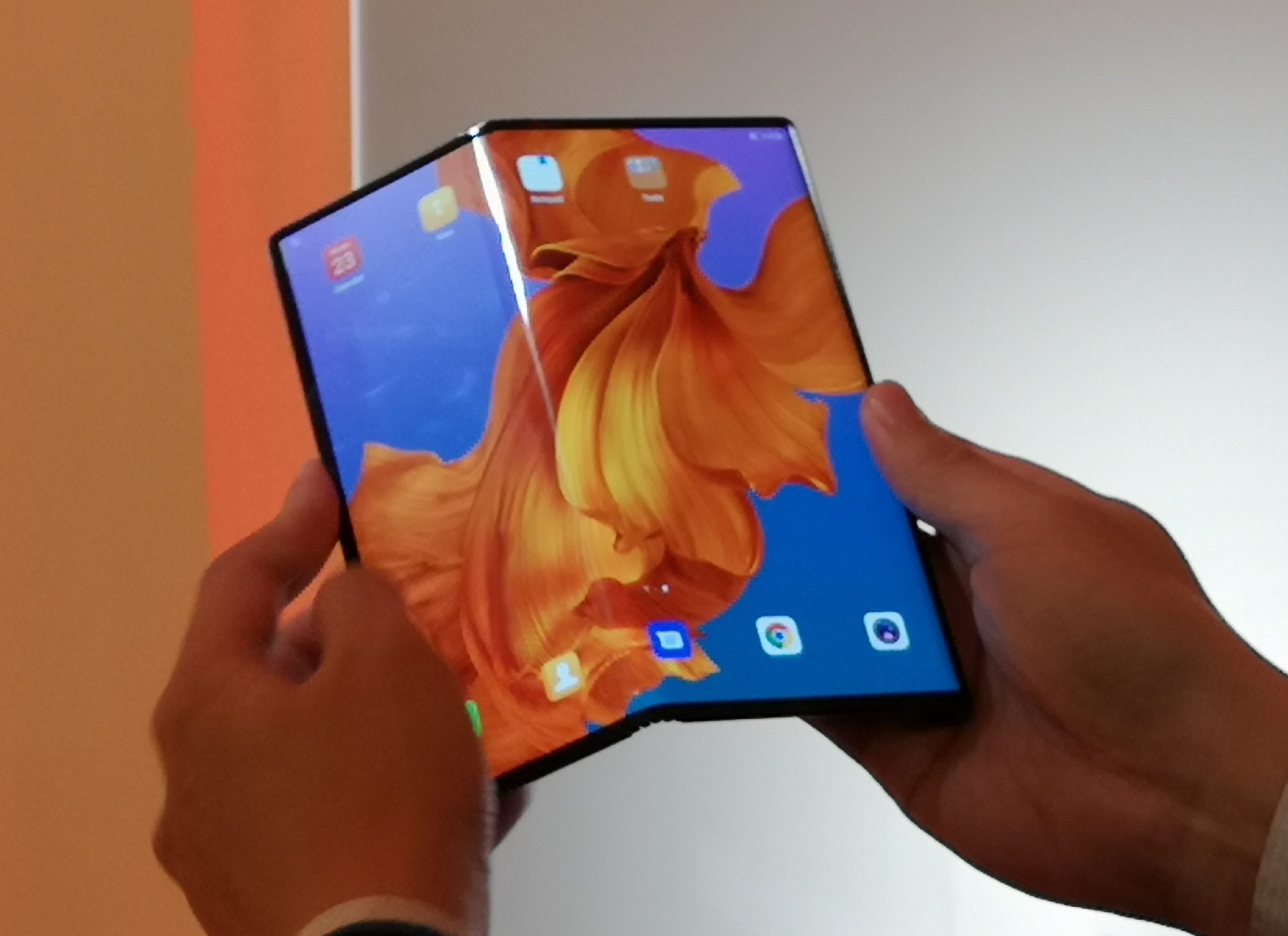 In its folded position, it has a 6.6-inch main screen as a standard smartphone display. On the back of the phone is a second display of 6.38 inches. 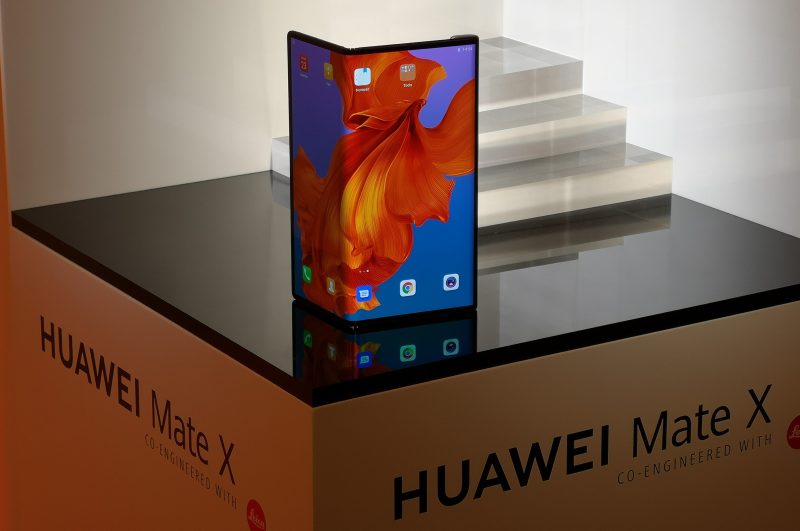 The company has dubbed this second display the “selfie,” because — among other things — you can now use the main cameras for taking pictures of yourself while also seeing the image setup on this second screen, rather than having to rely on the less-powerful front-facing camera to ensure the perfect duck face. The Mate X promises to let humanity become more self-involved than ever. 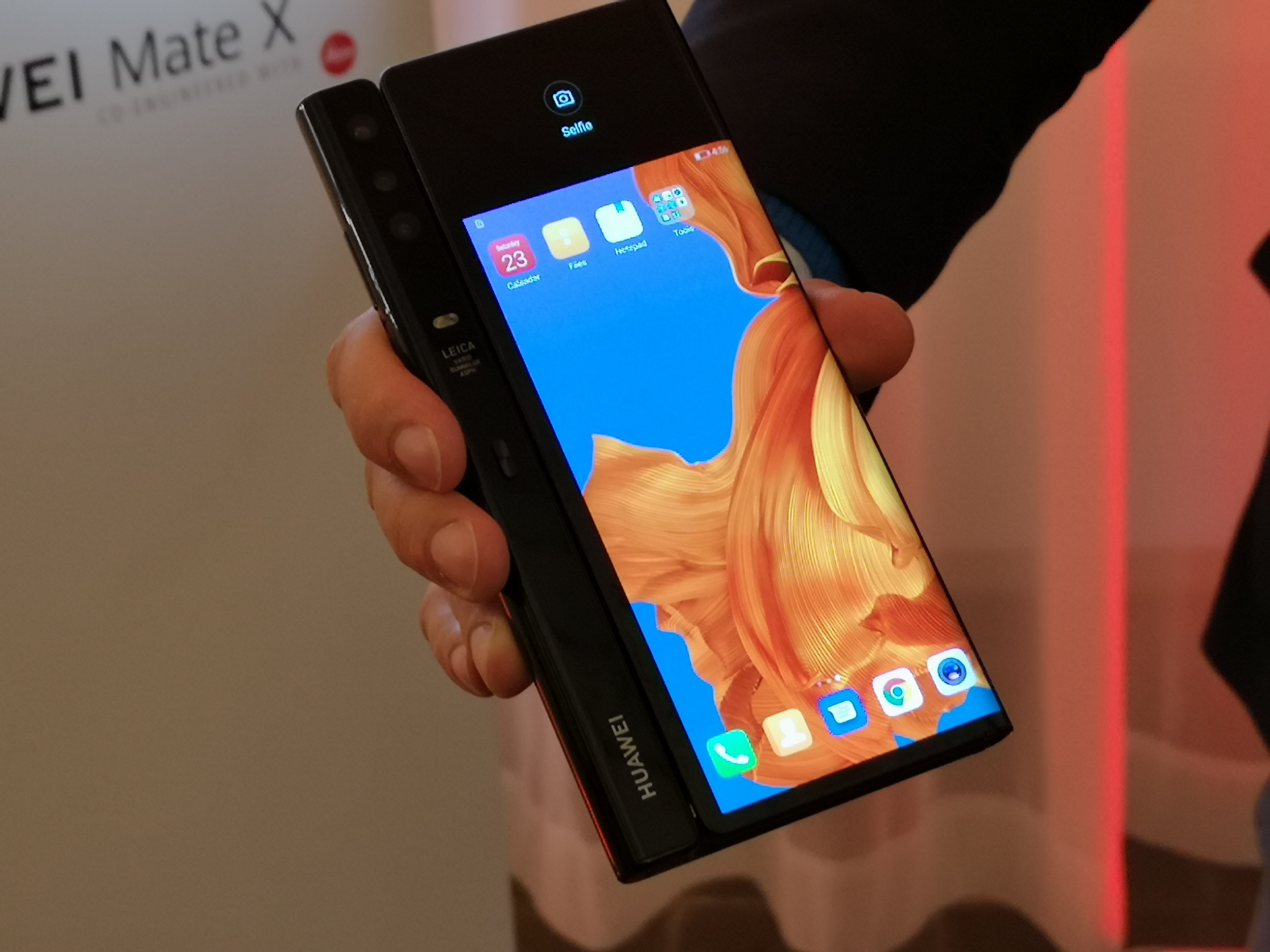 That bar running alongside the selfie screen is another distinctive design choice. Huawei refers to it as an “ergonomic curvature” that allows for a firm grip on the device when it’s unfolded. While the phone folds flat on both sides, the grip is designed to make it easier to hold the unfolded device with one hand. 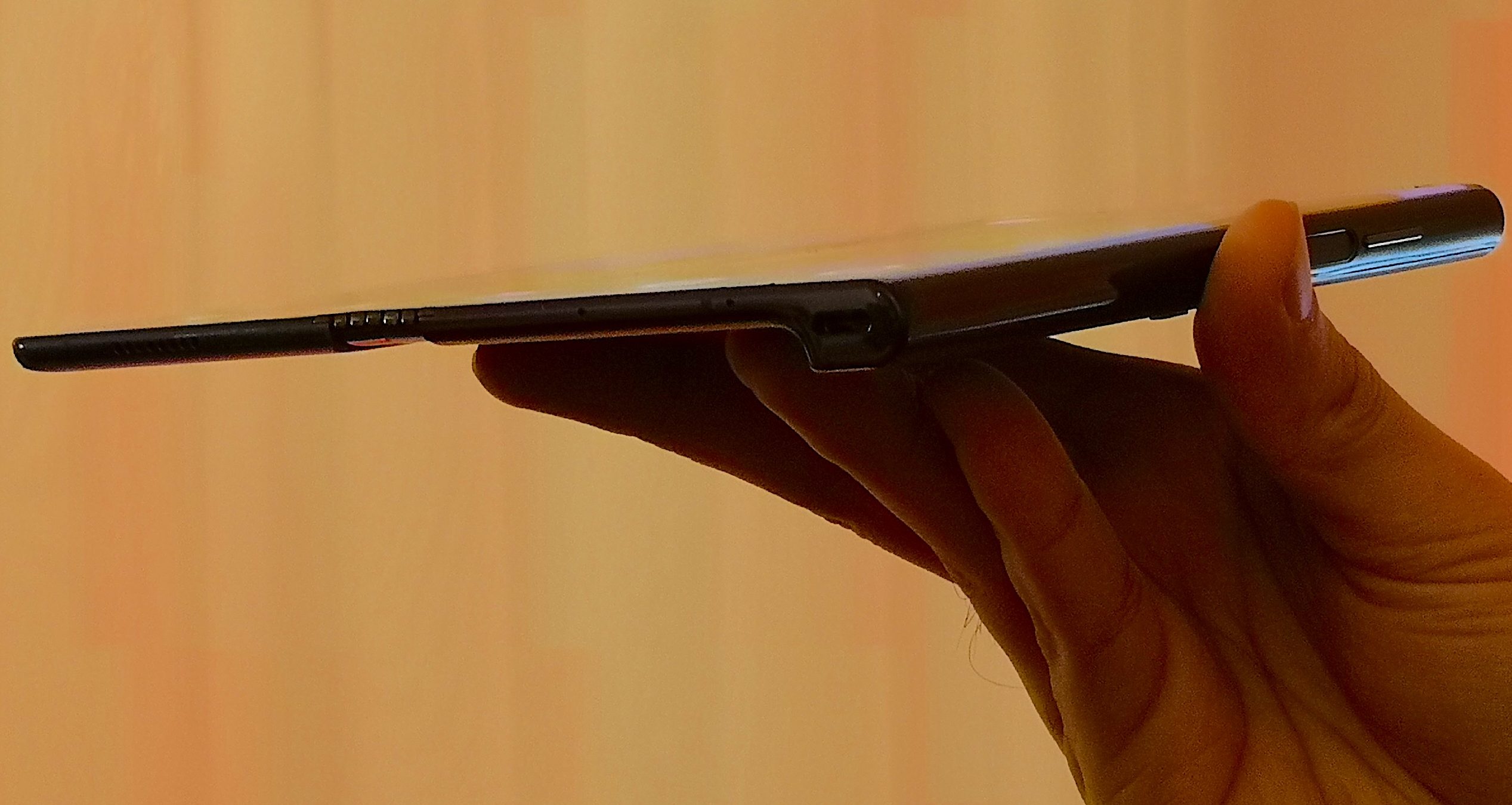 The bar is also where its 3-camera system is housed, which was designed in partnership with Leica.

In the unfolded position, the Mate X has an 8-inch tablet OLED display and is 5.4mm thick, just slightly thinner than the latest iPad Pro. The folding mechanism is something the company calls the Falcon Wing Hinge design. In the photo above, it’s the series of bumps that runs along the side of the device. 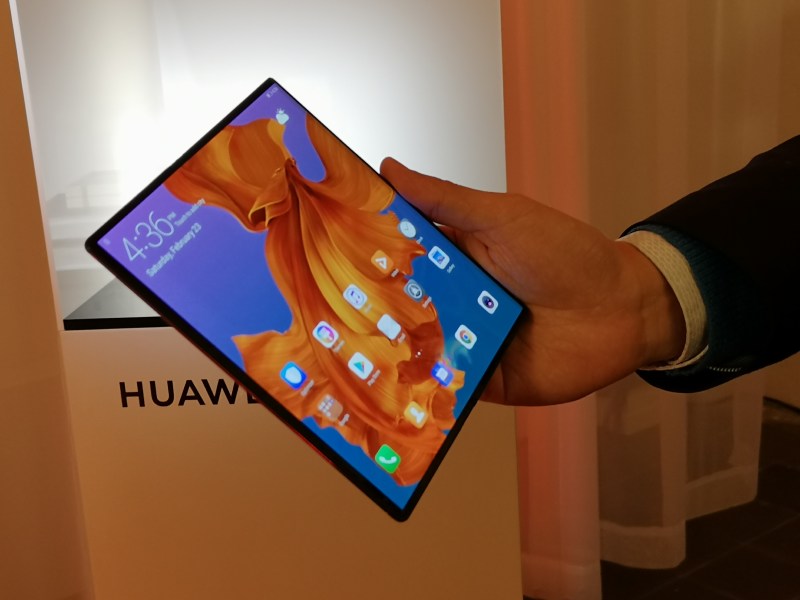 Inside, the phone is powered by Huawei’s processors, the Balong 5000 and Kirin 980. The company claims this will offer speeds 10 times as fast as 4G phones and more than 2 times the official industry standard for 5G. Practically, that means you can download a 1GB movie in 3 seconds, according to Huawei. 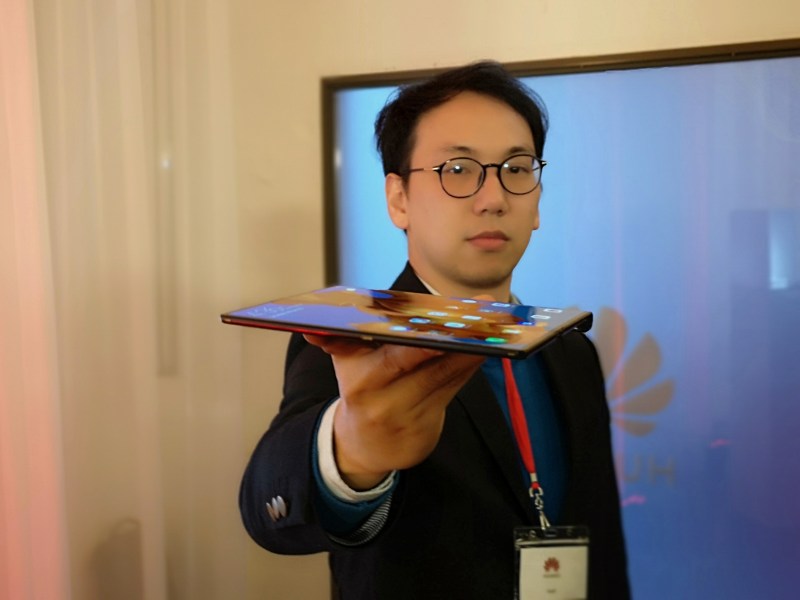 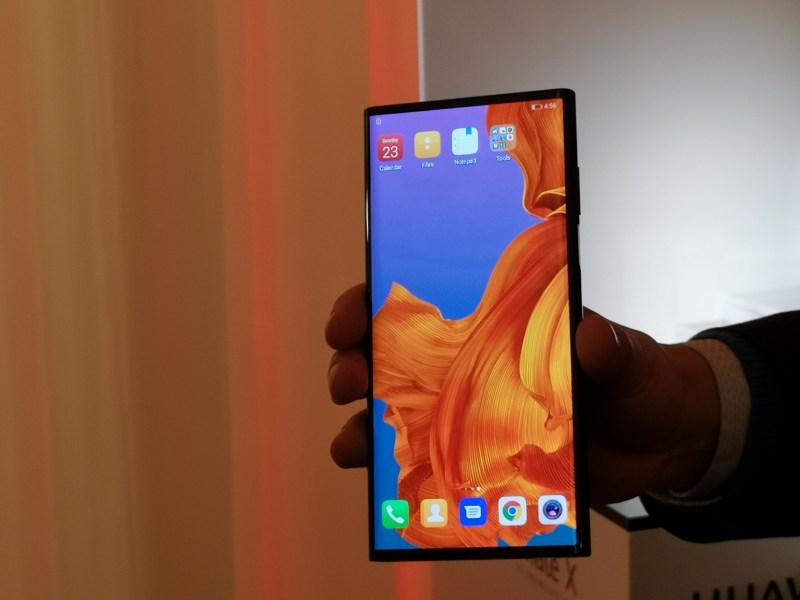 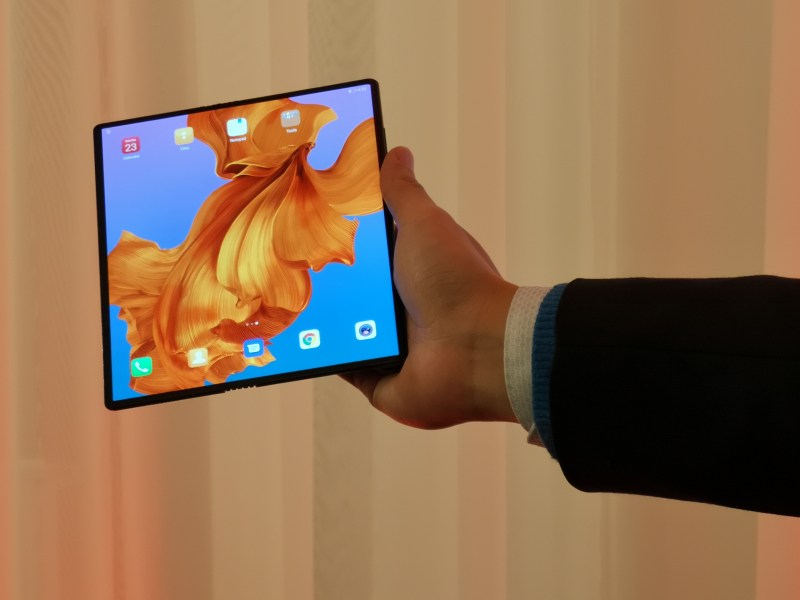 Finally, inside the phone there are two batteries, one in each half, that total 4500mAh in battery life. And it boasts 55W for supercharging, which means you can charge 85 percent of the battery in 30 minutes. The Mate X also allows for dual SIM cards.