Huawei’s consumer products CEO Richard Yu stood on a stage in Paris this week introducing two of the world’s best smartphones that virtually no American will ever buy. Though Huawei’s P30 series phones match or beat flagship phones from Apple and Samsung on a broad range of specs, the ongoing suspicion that the company is a security threat has made it politically impossible for U.S. companies to buy its phones or 5G telecom equipment.

So Huawei has turned its full attention to Europe, which has become the real telecommunications frontline in a broader trade war between the company, the Chinese government, and the United States. With carriers across the continent making plans for 5G and consumers happily buying Chinese-brand smartphones, Europe represents a massive opportunity for Huawei’s global ambitions.

Indeed, Huawei’s event was held on the second day of an official state visit by Chinese president Xi Jinping to France, where he met extensively with President Emmanuel Macron. While it appears to have been just a coincidence, the high-level meetings were a sign of how Europe and China are searching more broadly for new partnerships as the U.S. retreats into itself.

Jinping oversaw the signing of a number of political and cultural declarations, but also some hefty business deals. That included the sale of 300 planes made by France-based Airbus to the China Aviation Supplies Holding Company in a deal valued at $34 billion. The upbeat visit presented a striking contrast to the ongoing hostile rhetoric between President Trump and China.

Macron said in a statement that the countries intend to create a “strong Euro-Chinese partnership, based on clear, strict and ambitious rules.” On Tuesday, the Chinese president also met in Paris with Macron, German Chancellor Angela Merkel, and European Commission President Jean-Claude Juncker. 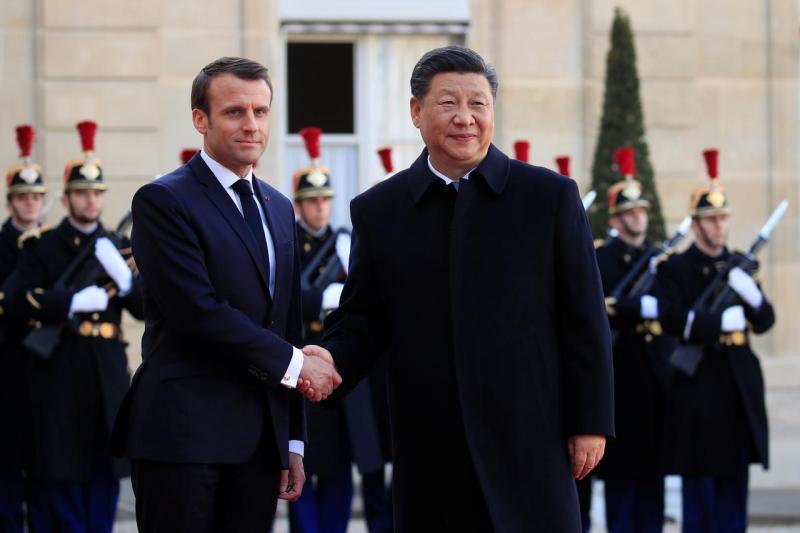 In another part of town, Huawei officials basked in an auditorium that drew more than 3,000 partners and journalists, evidence of how a Chinese brand that was practically unknown in Western markets just a few years ago is now the world’s number three seller of smartphones, just behind Apple. That Huawei grew its global smartphone sales by 33 percent in 2018 is even more remarkable given that it has been shut out of the U.S. market.

Much of that success outside China is due to Europe. In the fourth quarter of 2018, Huawei sold 13.3 million smartphones in Europe, up from 8.6 million for the same period one year ago. That 55.7 percent increase compares to a 5.1 percent decline for Apple.

Last year, recognizing the growing importance of Europe, Huawei came to Paris to unveil its P20 series of smartphones. Before the company debuted the P30 series this year, it showed a film that included glowing testimonials from European carrier partners such as Spain’s Telefonica, the U.K.’s Vodafone, and France’s Orange.

“Huawei is ahead of competition when it comes to 5G technology,” said Daniel Hernandez, device unit director for Spain’s Telefonica, who promised the carrier would sell Huawei phones in all of its markets. “Not only in infrastructure, but also in devices. … Huawei continues to bring innovation every six months. They continue to improve their products and they continue to bring that hunger and drive that makes the company truly unique. That’s why we want to work with them, because we have the same ambition.”

Stefano Parisse, group products and services director for Vodafone, added, “Since the beginning, Huawei was really keen to become the leader in the market. I really like the way they deal us, the professionalism, the openness, the collaboration, the cooperation.”

That tone contrasts sharply with recent remarks from AT&T CEO Randall Stephenson, who warned about the dangers of working with Huawei: “If you have deployed Huawei as your 4G network, Huawei is not allowing interoperability to 5G — meaning if you are 4G, you are stuck with Huawei for 5G. When the Europeans say we got a problem — that’s their problem. They really don’t have an option to go to somebody else.”

In another happy coincidence for the company, the European Union delivered an advisory decision on 5G security that declined to recommend a ban against using Huawei telecom equipment. It was yet another indication that despite pressure from the U.S. government — including threats to stop sharing intelligence data, arresting a Huawei executive, and bringing charges of intellectual property theft — the campaign is not gaining much traction in Europe.

The EU decision drew a happy statement from Abraham Liu, Huawei’s chief representative to the EU: “Huawei understands the cybersecurity concerns that European regulators have. Huawei looks forward to contributing to the European framework on cybersecurity. We are firmly committed to continue working with all regulators and partners to make the 5G rollout in Europe a success.”

That success in Europe has left Huawei feeling increasingly emboldened from a marketing and product perspective. During his presentation, Yu giddily pointed out the technical superiority of the new flagship phones compared to Apple’s and Samsung’s, even doing some live demo photo shoots using the three to drive the point home.

Anyone, or any country, that turns its back on Huawei, is settling for second best, the company argues.

“Every year, we pour huge resources into technology and innovation,” Yu said. “We are leading innovation to create a better connected life.”

In a press briefing the day before the event, Peter Gauden, a Huawei global senior product marketing manager, even ventured that all the controversy may have had a bright side: “Hundreds of thousands of people who never knew how to pronounce our name now know how to say it because it’s in the news all the time.”