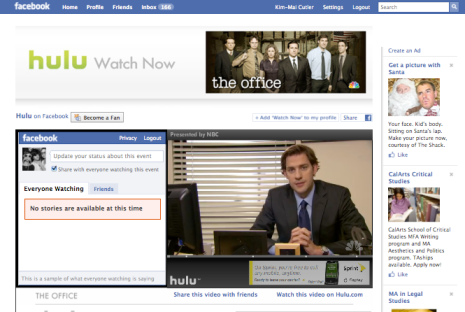 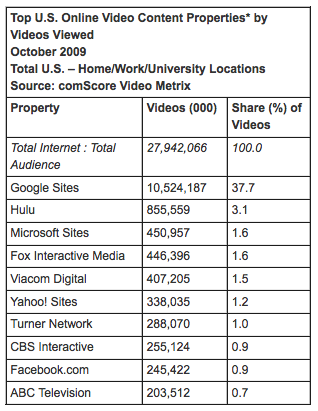 Video viewing habits are continuing their shift online. More than half of people in the U.S. watched video on the Internet in October, according to comScore.

Hulu is rising rapidly. The video portal for professionally produced content attracted 47 percent more views over the month. It pulled in about 850 million views in October compared to 583 million views in September. The site’s also stickier: the average user is watching about 20 videos, up from 15.

That growth may have come at the expense of its contributors: Fox’s views were down month over month. (Fox’s owner News Corp. is a partial owner of Hulu and has been grumbling lately about getting users to convert to a paid model in 2010.) Older companies like Viacom Digital, Yahoo, and Turner Network also declined in raw views.

At the same time, Google and YouTube’s views were pretty much flat at 10.5 billion streams in October compared to 10.4 billion streams the previous month. Of course, YouTube’s global numbers are larger — the company said it was serving more than 1 billion videos a day globally.

The other interesting thing to note is Facebook’s emergence as a force in video. The company is now one of the top 10 online video sites in the country with 245 million views and counting. 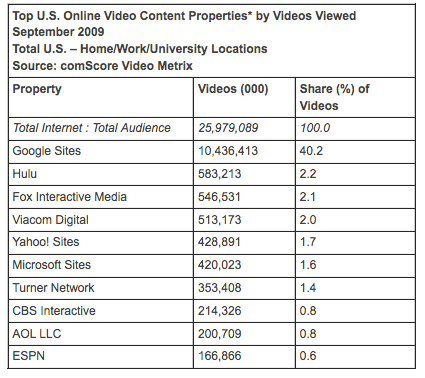 Facebook has been behind a number of recent video collaborations — the company has partnered with CNN and ABC to let users comment and chat alongside live video streams. It’s also partnered with Hulu to build a player inside the Facebook environment, allowing users to watch full episodes, post them to their profiles and comment on them with friends. Watch this space — Facebook’s use case for entertainment and socializing with friends most directly rivals that of YouTube’s.