Elon Musk revealed plans for his radical new form of transportation called the Hyperloop today, and yes, it really does look cool.

Musk described the capsule as being aluminum that could carry both humans and car-sized vehicles. The tubes would form a loop shape, the long-lengths of which would travel parallel to one another. They would be made of steel, welded together, and will sit only about 100 feet apart held up by pylons. Those inside the tube could travel up to 800 miles per hour and, if traveling in a car-capsule, could simply drive out of the tube once the destination has been reached. 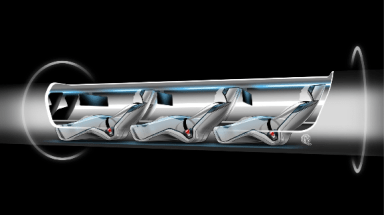 The capsule itself would carry 28 passengers. The capsules would leave San Francisco or L.A. every 2 minutes, or every 30 seconds during rush hour. As for a car capsule, you’ll be able to fit up to three cars inside one capusle. Musk says it will be planned so that the capsules themselves will be separated by at least 23 miles.

One of the biggest obstacles was the pressure of the air in the tube itself. Musk designed a way for the tubes to have pressure that is about one-sixth that of the pressure of Mars’ atmosphere. That’s like flying a plane at 150,000 feet. The capsules will be powered by a “linear electric motor,” which Musk describes as being like the one in the Tesla Model S, but “rolled flat.”

The capsules are equipped with emergency brakes that can be triggered by events such as a leak in a tube’s pressurizing system. The tubes all talk to one another, so to speak, and could alert other areas of the tube to an upcoming problem. In order to prevent attacks from within the tubes, the Hyperloop will have the same kind of security as airports. Whether that means the pylons holding up the Hyperloop will also be secured is unknown.

The capsules would hover above the surface of the tube as they traveled at high speeds. Musk says its highly unlike that one could get stuck in a tube, but if so, the capsule have a small engine and wheels that can deploy in emergencies. Reserve air supplies are also carried on board.

When he first spoke of his plans for the Hyperloop, he used the example of getting from San Francisco to L.A. in 30 minutes. He says the loop would actually be elevated above ground and would sit alongside California’s existing I-5 highway connecting the two major West Coast cities.

“The Hyperloop — or something similar — is, in my opinion, the right solution for the specific case of high traffic city pairs that are less than about 1,500 kilometers, 900 miles apart,” Musk said in a blog post regarding Hyperloop Alpha. “Around that inflection point, I suspect that supersonic air travel ends up being faster and cheaper.” 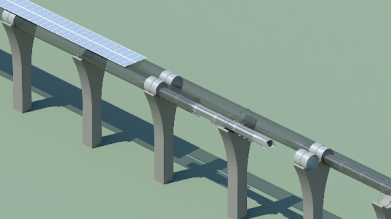 For some time now Musk has expressed his discontentment with the transportation available in California. He has criticized plans for a bullet train as one of the most expensive and slowest in the world, though he had to hedge saying “one of” because the person in charge of the program gave him a call.

His goals for the Hyperloop are that it be safer, faster, cheaper, more convenient, immune to weather, self-powering, earthquake-resistant, and not disruptive to the surrounding areas. Musk says the Hyperloop passenger-only version could be built for under $6 billion. It would cost closer to $7.5 billion to create it with the vehicle-carrying capsules.

Musk says that he won’t be the one to build the Hyperloop just yet. Instead, he’d like to see the community grab the specifications that he has already put out there and take the project on themselves. In his document detailing the Hyperloop Alpha, Musk even says that this is considered an “open source transportation concept.” At this point, he is just too busy running both his electric car company Tesla as well as Space-X, a rocket-building company that has hopes of bringing people into space commercially.

He, of course, says the Hyperloop is only short of figuring out real teleportation, to which he simply says, “Someone please do this.”

This story is developing, please refresh the page for updates.