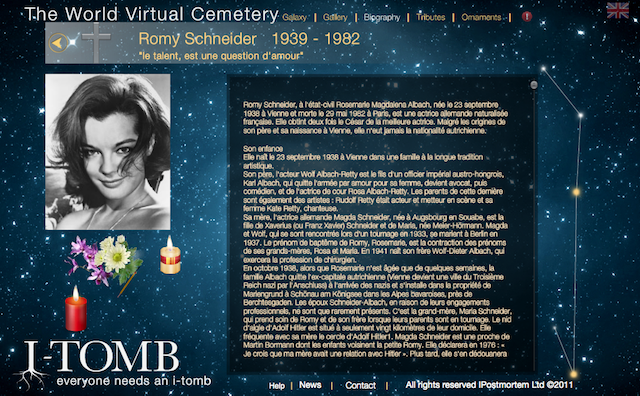 After you’re gone, how will people remember you?

If you’re lucky, Facebook might keep your profile page around for awhile. But the company’s interest is decidedly among its living customers, who are easier to advertise to. That’s why Jacques Mechelany thinks there will be a market for his company, i-Postmortem, which creates “virtual tombs.”

“What we’re talking about here is the human evolution from gravestones to virtual tombs,” said Mechelany, in an earlier interview with VentureBeat. “For the first time in the history of humanity, we have the ability to leave a trace of one’s life and pass it along to future generations.”

i-Postmortem, which launched today, offers two services, one for the living and one for the dead. For $120 a year, customers who still walk the earth can create their own personal memorials ahead of time, including photos, videos and text that they want to leave to their descendants as well as last wishes and instructions to descendants. This “i-Memorial” is a secure product, so you could include passwords to your computer and email accounts that would only be accessible to your spouse after you pass away.

For customers who have already passed into the great beyond, i-Postmortem will maintain virtual i-Tombs. In exchange for a $50 per year fee, the company guarantees that these virtual memorials will remain online and accessible, no matter how many times formats, browsers and the underlying technologies change. Are you descendants reading up on you through HTML 10-enabled Chrome version 42 over gigabit intergalactic Wi-Fi? If they’ve maintained the annual payments, i-Postmortem will maintain your website.

It’s the sort of idea that is probably not going to occur to a young entrepreneur. Indeed, Mechelany has had a long and successful career in finance. I-Postmortem is, in part, his effort to leave a legacy for his own children.

It’s also inspired by his own grandmother, who passed away 20 years ago, leaving behind a set of beautiful, leather-bound photo albums from the 1870s. Unfortunately, while Mechelany and his family have photos of their ancestors, they know almost nothing about the people in the pictures.

“I thought, that’s really sad. You have fantastic things, those photo albums are 130 years old, they’ve gone through time, but unfortunately the people they represent are long forgotten,” Mechalany said.

“I got to a point in financially where I could do what I wanted to do.” And what he wanted to do was leave a trace.

It might sound a bit like a wacky retirement project, and it may be, but Mechalany and his team appear prepared to make a real go of it. The company is headquartered in Palo Alto, Calif. (the better to recruit top-notch Silicon Valley talent, he says), is backed with $2 million from the founders and their friends and family, and plans a massive, worldwide media campaign in 16 languages to promote the company, starting today. In order to ensure data integrity, its virtual memorials are stored in a high-security data center in Switzerland.

While other startups might try to support themselves via advertising, Mechalany argues that fee-for-service is a better way to ensure long-term viability. If the company offers a service worth paying for, people will pay for it. Besides, who wants advertisements on their gravestones?

“We have customers who are dying to open their accounts,” Mechalany said.

Yes, he really did say that.

I-Postmortem is one of 80 companies chosen by VentureBeat to launch at the DEMO Fall 2011 event taking place this week in Silicon Valley. After our selection, the companies pay a fee to present. Our coverage of them remains objective. There’s still plenty to see at DEMO, and VentureBeat readers can get a special discount on registration for the remainder of the show at demo.com/VBDay.