The global big data analytics market for health care was valued at $16.87 billion in 2017 and is projected to reach $67.82 billion by 2025, according to a recent report from Allied Market Research. It’s believed that health care organizations’ implementation of big data analytics might reduce annual costs by over 25% in the coming years. Better diagnosis and disease predictions, assisted by AI and analytics, can lead to cost reduction by decreasing hospital readmission rates, among other factors.

Ibex, whose competitors include Paige, PathAI, and ContextVision, among others, was founded by Joseph Mossel and Dr. Chaim Linhart. Mossel’s background is in computer science, product development, and management, whereas Linhart is an AI and machine learning researcher. Mossel’s brother-in-law, a pathologist, surprised the founders by telling them that cancer diagnosis still relied predominantly on pathologists looking at physical tissue samples through a microscope. The two identified this as an opportunity to use AI and machine learning and train an algorithm that would help pathologists diagnose cancer more accurately and with greater efficiency.

Ibex offers an AI solution that operates as a “safety net” for pathologists and patients, according to Mossel. Biopsies undergo an AI second read, where the AI provides a “second opinion” that enables the automated detection of diagnostic errors — first and foremost missed cancers. Ibex’s AI also serves as a decision support tool during primary diagnosis. This way, pathologists benefit from the predictions offered by the algorithm while using additional tools and insights that help them triage cases, focus on areas of interest, and streamline reporting.

In recent years, a global increase in cancer cases, an aging population, and advances in personalized medicine have resulted in increases in the complexity of pathology diagnostics. At the same time, the number of pathologists worldwide is decreasing. According to a recent study, the number of pathologists in the U.S. decreased by 17.53% from 2007 to 2017, helping to push the diagnostic workload per pathologist to rise 41.73%. This increase in the average caseload raises implications about delays in cancer detection and concerns over errors and misdiagnosis.

Ibex’s major partner is Maccabi Healthcare Services, the second largest provider in Israel. Maccabi owns one of the largest digitized clinical datasets in the world, spanning millions of pathology slides and millions of fully digitized pathology reports — a true goldmine for developers of AI algorithms in pathology. 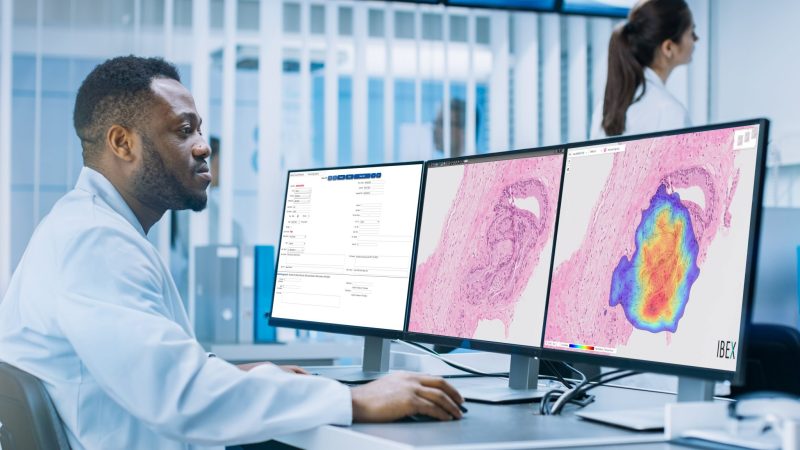 Ibex trains its AI models using a Maccabi dataset that contains millions of pathology slides and digitized reports, which Ibex augments with additional datasets from other pathology institutes. These datasets differ in many respects, including the staining methods and scanning systems used to create the images from the original tissue samples, Mossel says. For example, Ibex’s prostate exam model was trained on a dataset consisting of over 60,000 slides and more than 45,000 annotations from 15 different institutes.

“The richness of the dataset we used, together with a rigorous approach to training and validation, which was done on new datasets and included review by independent pathologists, resulted in a very accurate algorithm that detects, in addition to cancer, many other clinically important features,” Mossel told VentureBeat via email. “In a clinical study at the University of Pittsburgh Medical Center, published in The Lancet, Ibex’s algorithm demonstrated the highest accuracy ever reported for an AI algorithm in pathology … And in a recent study in a large network of pathology labs in France, it was demonstrated that when using Ibex’s prostate exam solution … pathologists were able to reduce the average time needed to diagnose a biopsy by almost 30% compared with the average time needed for traditional diagnosis on a microscope.”

Mossel observed that the pandemic has accelerated digital transformation in pathology, leading to broad adoption of technologies, including AI, that help pathologists to work remotely. Moreover, the use of AI is helping to improve diagnostic efficiency, Mossel asserts, which in turn is helping to balance fluctuating workflows caused during and after lockdowns. A December 2018 survey of health care professionals by HIMSS Media found that AI and machine learning are already delivering value in specialty care including radiology, pathology, and pharma, according to 63% of the research participants. More than half of respondents indicated that they’re using the technologies in population health programs, while just over 40% said they were doing so to advance precision medicine.

Ibex’s latest funding round, a series B, was led by Octopus Ventures and 83North with participation from aMoon, Planven Entrepreneur Ventures, and Dell Technologies Capital, the corporate venture arm of Dell Technologies. It brings the 5-year-old, 35-person company’s total raised to date to $52 million since its inception in 2016 as part of the Kamet Ventures incubator.