IBM announced that it is acquiring Taos, a provider of managed and professional IT services with a strong focus on public cloud computing platforms. At the same time, Deloitte Consulting shared that it has completed its previously announced acquisition of HashedIn Technologies, a software engineering and product development firm specializing in cloud native technologies.

Terms of the deals were not disclosed. However, they come after the number of workloads being shifted to public clouds has accelerated significantly during the COVID-19 pandemic. That shift is altering the center of data gravity in the enterprise in a way that requires IT services providers to add additional application and data management expertise spanning multiple clouds.

Most of the data that organizations manage today still resides in on-premises environments. But it’s not likely all data will reside on-premises or in the cloud. Instead, organizations will find themselves managing data as it ebbs and flows across multiple centers of data gravity, IBM Services executive David Sun said in an interview with VentureBeat.

“All our clients are telling us their applications and data will reside in multiple clouds and hybrid cloud computing environments,” Sun said.

Taos, which will operate as an IBM company based in San Jose, California, will remain after the rest of IBM’s infrastructure-focused managed services business is spun out sometime next year. That relationship is similar to the one IBM is establishing with 7Summits, an IT service provider focused on the Salesforce platform IBM acquired last week. This follows IBM’s announcement last month that it plans to acquire Nordcloud, a provider of cloud consulting in Europe. Overall, mergers and acquisitions among IT service providers are at an all-time high.

The challenge enterprise IT teams face today is that there is a general shortage of cloud computing expertise. IBM and other IT service providers are counting on organizations to augment the limited IT expertise and resources they have with external cloud expertise. This is even more sought after now because most enterprise IT organizations don’t have a lot of experience employing cloud native technologies, such as containers, Kubernetes, and serverless computing frameworks.

Technology research and advisory firm Information Services Group (ISG) published a report on commercial outsourcing contracts earlier this week. The study found contracts that had an annual value of $5 million or more and involved as-a-service platform and managed services reached $16 billion in the fourth quarter of 2020. That’s up 13% over last year and 9% over the third quarter. Managed services specifically accounted for $7.2 billion for the quarter, which according to the report marks the first time managed service deal sizes have returned to their pre-pandemic levels. 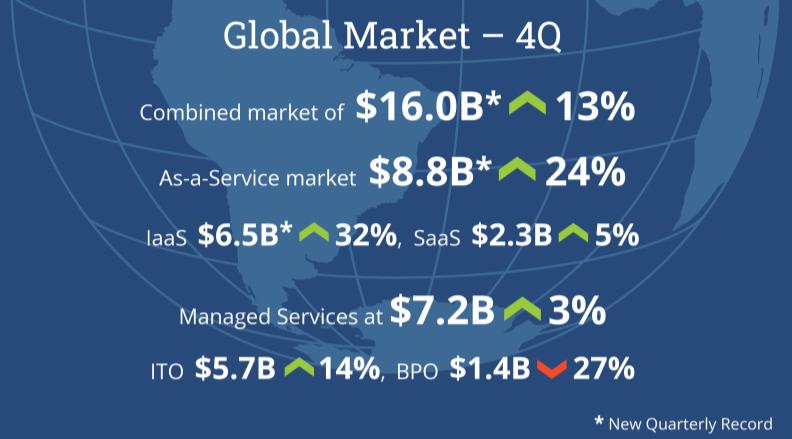 A significant percentage of those managed service contracts revolve around cloud computing projects, ISG president Steve Hall said. Managed service providers (MSPs) are trying to strike a balance between a decline in demand for managing on-premises IT infrastructure and cloud computing opportunities that require more software expertise, Hall said. “Many MSPs have been focused on the datacenter,” he explained.

The biggest challenge in the last year has been that landing new business typically requires in-person meetings because of the level of trust that needs to be established between service providers and their end customers, Hall noted.

Less clear at the moment is to what degree organizations will come to rely more on outsourcing as IT environments become increasingly complex. The overall percentage of IT consumed as a managed service has been relatively small compared to the trillions of dollars in applications and infrastructure managed internally by an IT staff. However, Gartner is forecasting that the market for cloud professional services will exceed $200 billion by 2024.