IBM is about to deliver the foundation of a brain-inspired supercomputer to Lawrence Livermore National Laboratory, one of the federal government’s top research institutions. The delivery is one small “blade” within a server rack with 16 chips, dubbed TrueNorth, and is modeled after the way the human brain functions.

Silicon Valley is awash in optimism about artificial intelligence, largely based on the progress that deep learning neural networks are making in solving big problems. Companies from Google to Nvidia are hoping they’ll provide the AI smarts for self-driving cars and other tough problems. It is within this environment that IBM has been pursuing solutions in brain-inspired supercomputers. The main benefit is that such chips may be able to operate at lower frequencies and get much more work done on a much smaller amount of power.

The TrueNorth chip itself has more than 5.4 billion transistors, about as many as a state-of-the-art conventional silicon chip today. But this chip’s transistors are configured as a million neurons, or the equivalent of brain cells, and 256 million synapses, or connections. It consumes only about 70 milliwatts of power, or the equivalent of a hearing-aid battery. That’s an order of magnitude better than other solutions, said Dharmendra S. Modha, an IBM fellow and chief scientist of brain-inspired computing at the IBM Almaden Research Center in San Jose, Calif., in an interview with VentureBeat. The Livermore project is an important test of a new computer architecture that could be used in everything from single-chip computers to systems with thousands of chips.

“We can scale up enormously, from one chip in a mobile setting to some very large systems,” Modha said. 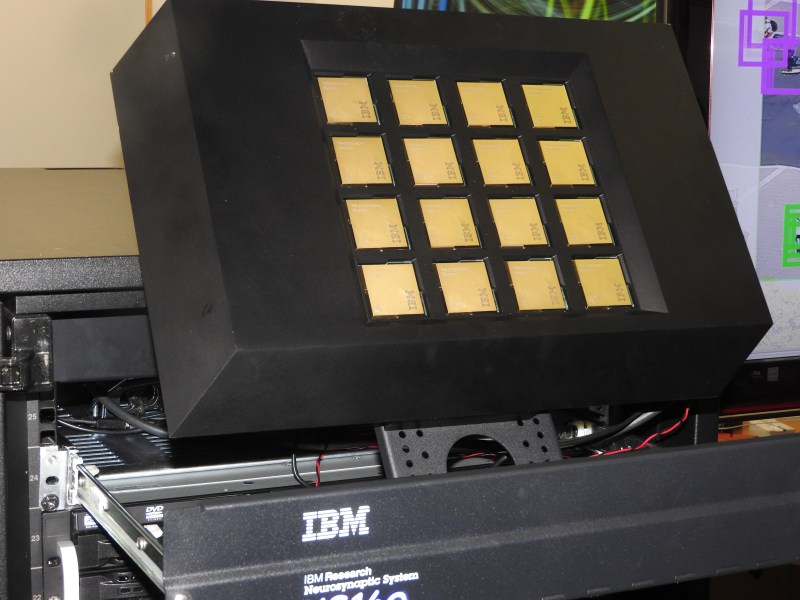 Above: This system has 16 IBM TrueNorth brain-inspired chips.

“Lawrence Livermore has commissioned a scale-up, brain-inspired supercomputer, and that’s what you’re looking at here,” Modha said. “Our long-term goal is to build a brain in a box, with 10 billion neurons in a 2-liter volume, consuming about a kilowatt of power. That’s the long-term trajectory we are on. ”

The Livermore lab is working on a new generation of supercomputers that can perform at “exascale” speeds, or 50 times faster than the most advanced petaflop systems now in place. IBM’s believes a brain-based computer could operate on significantly less electrical power and volume.

Back in 2011, when I got my first look at IBM’s prototype “brain chip,” the company had a prototype with one core and 256 neurons. Now, each chip has 1 million neurons, 256 cores, and 256 million synapses. It operates on 70 milliwatts of power. It can deliver 46 giga synaptic operations per second.

Each TrueNorth chip is part of a 16-chip system board that is housed in a server blade. That is what IBM is delivering to Lawrence Livermore. And that board has the ability of 16 million neurons, 4,096 cores, and 4 billion synapses. The 16 chips operate on 2.5 watts of power, while the whole board consumes about 7 watts. Eventually, IBM will populate an entire rack with a bunch of these server boards, and provide a bunch of racks to its customers who want to build scale-out supercomputers. IBM is currently working under a $1 million contract with Livermore. Presumably, if it all goes forward, much more money will be at stake.

“The beauty of the TrueNorth chips is that you can put one in and it just starts communicating” with the chips around it, Modha said. “It does this without a need for any communication interface. We can just scale it up.”

IBM has demonstrated this in the 16-chip computer blade that it is delivering to Livermore, Modha said. IBM’s industrial design team created a fancy enclosure to house it — and so it looks more “iconic,” like something out of science fiction, rather than a typical piece of computer hardware, said Bill Risk, senior software engineer at IBM. 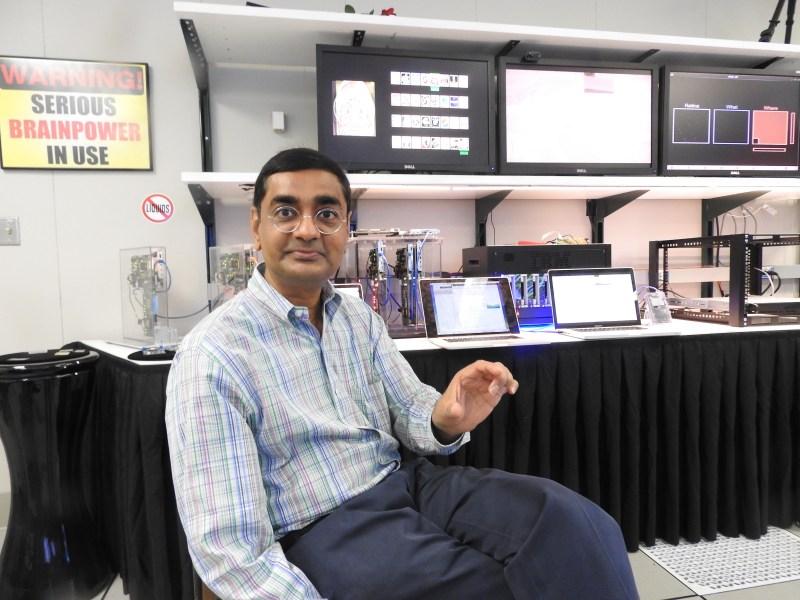 The chips can operate a brain-like neural network to handle complex cognitive tasks — such as pattern recognition and integrated sensory processing — far more efficiently than conventional chips. And that means a computer in a self-driving car could tap a data center with TrueNorth chips to analyze all of the pedestrians, cars, bicycles and other objects in an environment around a self-driving car.

Lawrence Livermore will likely use the system to test nuclear weapons without setting them off. The  new computing capabilities may prove important to the National Nuclear Security Administration’s (NNSA) missions in cyber security, stewardship of the nation’s nuclear deterrent and non-proliferation. NNSA’s Advanced Simulation and Computing (ASC) program will evaluate machine learning applications, as well as deep learning algorithms and architectures, and conduct general computing feasibility studies.

The technology represents a fundamental departure from the 70-year-old computer design popularized by computer architect John von Neumann. In von Neumann machines, memory and processor are separated and linked via a data pathway known as a bus. Over the years, von Neumann machines have gotten faster by sending more and more data at higher speeds across the bus as processor and memory interact. But the speed of a computer is often limited by the capacity of that bus, leading to what some computer scientists to call the “von Neumann bottleneck.”

With the human brain, the memory is located in the same place as the processor — at least, that’s how it appears, based on our current understanding of how the brain works. The brain-like processors with integrated memory don’t operate quickly by traditional measurements, sending data at a mere 10 hertz, or far slower than the 5 gigahertz computer processors of today. But the human brain does an awful lot of work in parallel, sending signals out in all directions and getting the brain’s neurons to work simultaneously. Because of this, the brain’s more than 10 billion neurons and 10 trillion connections (synapses) between those neurons amounts to an enormous amount of computing power.

IBM’s older Blue Gene supercomputer, a traditional von Neumann machine, had 1.5 million processors, but it ran 1,500 times slower than real time, in comparison to the human brain. A hypothetical supercomputer using the von Neumann design would have consumed 12 gigawatts of power to accomplish what the brain can do. That’s as much power as is consumed by the island of Singapore, Modha said. 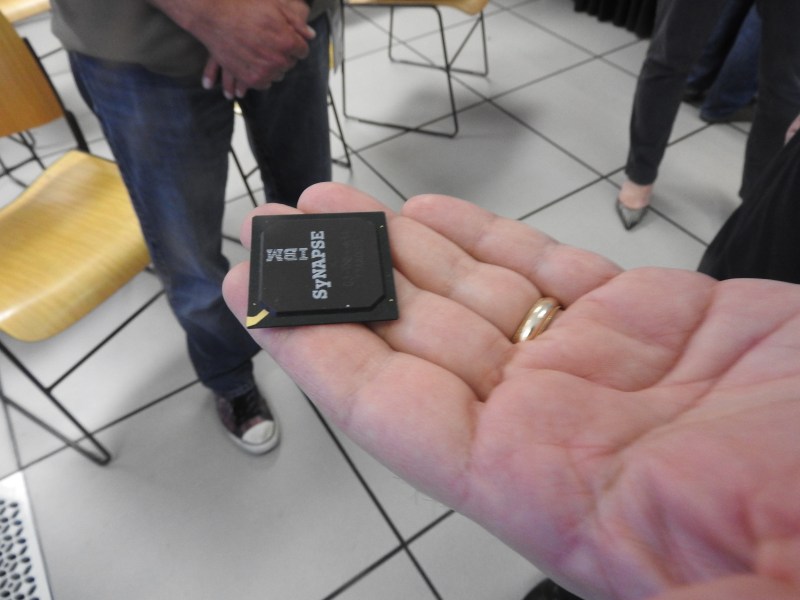 Above: IBM TrueNorth chip has a million neurons.

IBM is emulating the brain’s architecture with its new TrueNorth chips, which were originally developed under the auspices of the Defense Advanced Research Projects Agency (DARPA) and Cornell University.

The work combines supercomputing, nanotechnology, and neuroscience in an effort to move beyond calculation to perception. About 35 people within IBM Research across three company sites and multiple countries are working on the IBM brain-inspired project, Modha said. To create the full ecosystem around TrueNorth, IBM has had to create a simulator; a programming language; an integrated programming environment; a library of algorithms, as well as applications; firmware; tools for composing neural networks for deep learning; a teaching curriculum; and cloud enablement.

Brian Van Essen, a computer scientist at Lawrence Livermore National Laboratory’s Center for Applied Scientific Computing, said in an interview with VentureBeat that the collaboration with IBM started in the fall of 2014. 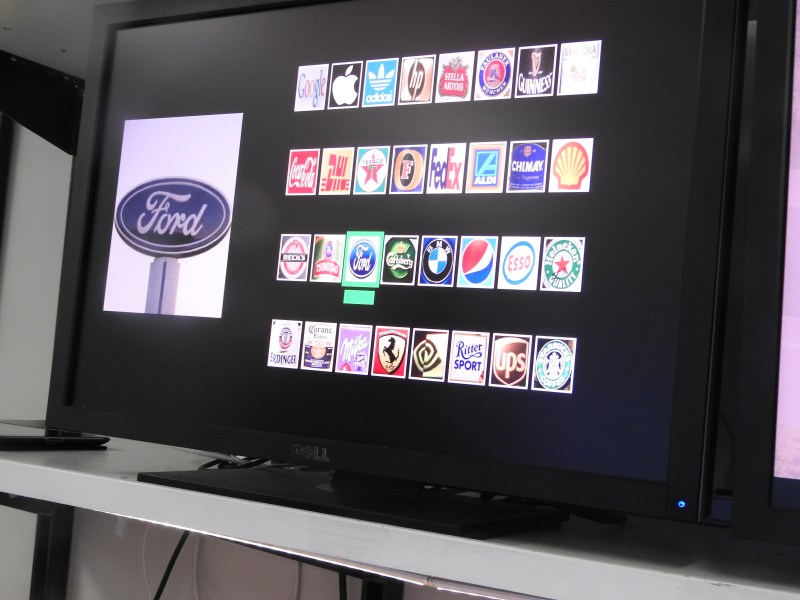 Above: The TrueNorth chip can be used with neural networks that recognize objects such as brands.

“We are looking beyond von Neumann processors as we scale toward exascale,” he said. “We are very excited about the very low-power aspects of TrueNorth. It’s an order of magnitude difference in energy usage.”

Van Essen said he is excited about the AI community’s excitement around deep learning and neural networks.

“We are looking at how we can apply it with TrueNorth,” he said.

He said that TrueNorth’s ability to discern patterns and run large-scale simulations is very promising.

“This is by no means the only approach that is being done in the community to mimic biology,” he said. “It is still balancing digital logic design with inspirations from the brain. It is mimicking behavior, but it is not slavishly copying the brain. That approach allows IBM to create a chip that takes advantage of advanced semiconductor design techniques.” 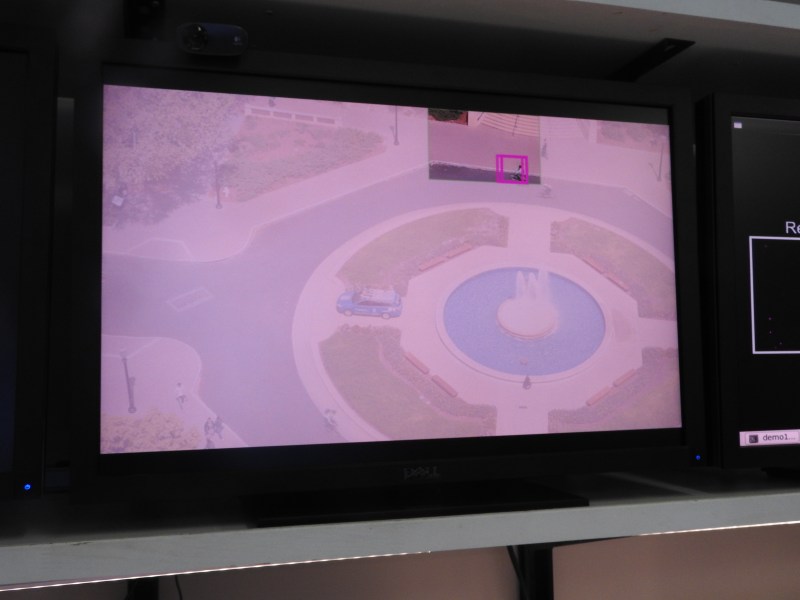 Above: IBM’s TrueNorth chips can discern the difference between pedestrians and other objects.