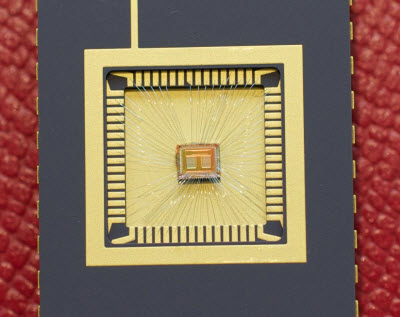 IBM researchers have made a breakthrough in a new kind of memory chip that can record data 100 times faster than today’s flash memory chips. That means scientists are one step closer to creating a universal memory chip that is fast, permanent, and has lots of capacity.

If they really work as billed, these multi-bit phase-change memory chips could transform enterprise computing and storage by around 2016, according to IBM. The technology could lead to chips that are lower cost, faster, and more durable in storing applications for consumer devices, including mobile phones and cloud storage. It could also benefit enterprise data storage applications.

Scientists at the research labs of Big Blue have demonstrated that phase-change memory can reliably store multiple bits of data per cell for extended periods of time.

The technology moves science one step closer to finding a universal non-volatile memory. Dynamic random access memory — used for main memory in computers — is fast, but it can only store data when the power is turned on. Flash memory can store memory permanently, even when power is turned off, but it is slower and has less capacity than DRAM, and it’s also more expensive. Hard disk drives have a lot of capacity, but they’re slower. A universal memory would theoretically be able to store and fetch data quickly, keep it permanently, and have a low cost and high capacity.

Computers with a universal memory could boot instantly (like Apple’s flash-based MacBook Air) and have lots of storage capacity and fast performance that would be useful in enterprise computing. Phase-change memory can retrieve and write data 100 times faster than flash, enable high storage capacity and not lose data when the power is off. It is also durable and can endure for 10 million write cycles, compared to 30,000 cycles for enterprise flash memory and 3,000 cycles for consumer flash memory.

People shouldn’t get too excited until IBM can prove that it can mass produce the technology, since phase-change memory has been under research for a long time. The IBM scientists say they used advanced modulation coding techniques to get rid of a problem known as “short-term drift,” which changes resistance levels in chip circuitry over time and causes data read errors. Up to now, reliable retention of data has only been possible for single-bit per cell phase change memory. Now IBM has demonstrated that multi-bit cell phase change memory can be made reliably.

The phase change memory leverages the change in resistance that occurs in the material, which is an alloy of various unnamed elements, when it changes from a crystal phase to an amorphous phase. The crystalline phase has low resistance, while the amorphous has high resistance. That can be changed by applying electrical voltage or pulses. Those changes can designate a switch from a one to a zero, which are the basic bits used in digital memory systems. Depending on the amount of voltage applied, part or all of the material will undergo a phase change; that means that multiple bits can be stored within a single memory cell, making the material cheaper to produce.

It’s sort of like being able to put four people into a single family home rather than just one. The housing cost per person goes down. IBM is able to put four distinct bits into one cell. IBM scientists made the writing process more reliable by writing and then measuring the accuracy of the write. If it isn’t accurate, the write action is performed again until it is accurate, said Haris Pozidis, Manager of Memory and Probe Technologies at IBM Research, Zurich.

The latency, or time it takes to get a task done, is 10 microseconds, which is 100 times faster than the fastest flash memory on the market today. But to be really useful, the phase change memory will have to be able to beat the flash chips that are on the market in 2016. IBM also used an advanced modulation coding technique that enabled better read accuracy. Reading and writing are the basic functions of a memory chip, in addition to storing data.

The phase change memory test chip was created by IBM scientists located in Burlington, Vermont; Yorktown Heights, New York and in Zurich. The experiment for retaining data has been under way for more than five months. IBM presented a paper on the topic at the 3rd IEEE International Memory Workshop in Monterey, Calif.