IBM researchers have discovered a new class of synthetic polymer — a flexible and strong material — for the first time in decades. The new materials are strong, cheap, flexible, recyclable, and self-healing. They sound too good to be true, but IBM is unveiling a lot of hard science behind them today.

In a paper in the academic journal Science, researchers at the IBM Almaden Research Center in San Jose, Calif., said the new industrial polymers are the world’s first family of materials that are stronger than bone, self-healing, and solvent-resistant while being completely recyclable back to their starting material. The materials could be used as cheaper, lighter, and stronger recyclable materials in manufacturing industries such as semiconductors, aerospace, airline, and automotive industries. IBM believes the materials could impact every engineering and product design category.

Polymers are long chains of molecules that are connected via chemical bonds, and they are already a huge part of our lives. They’re present as a core material in products such as clothing and drink bottles (polyesters), paints (polyacrylics), plastic milk bottles (polyethylene), secure food packaging (polyolefins and polystyrene). But these materials often don’t fare well when facing the elements. They can “stress crack,” and they are hard to recycle. They wind up in landfills as toxins.

“This kind of discovery comes along once every few decades,” James Hedrick, advanced organic materials scientist at IBM Research, told VentureBeat in an interview. “There’s a huge cost to bringing a new polymer to market in such a mature field. But this discovery is something special.” 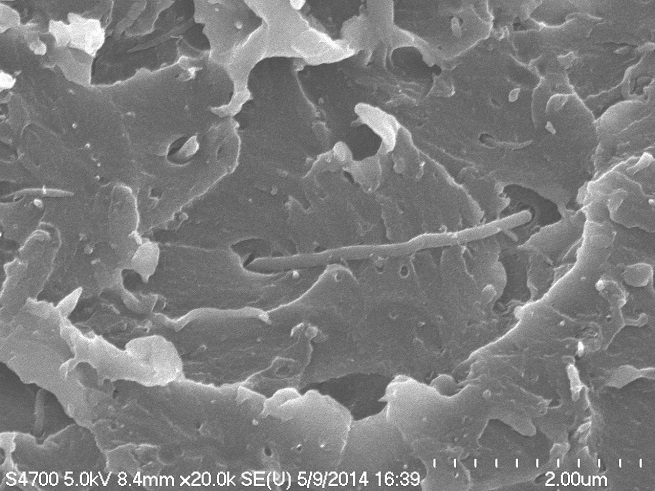 IBM scientist Jeannette Garcia first discovered the first class of polymers, dubbed PHT, by a happy accident. She was putting together a known material with high strength. But she left one ingredient out. The result was something very different from what she thought it would be. She had to break her test tube to get it out, and then she found it was virtually indestructible. A larger team went to work on “computational chemistry,” or the likely path of reactions that led to the creation of the new material. The techniques combined high-performance computing and synthetic polymer experiments.

“It’s stronger than materials that are already used in airplane wings, bone, and fiberboard,” Garcia said. “These are very strong materials. When we reinforced them with carbon nanotubes, it improved the strength by another 50 percent. We are getting closer to materials that are like metal, but they’re much more lightweight.”

When the team lowered the temperature, it found another kind of material — an elastic gel. It’s like a rubber band, but it consists of 75 percent or more liquid. If you put it in water, it will revert back to its starting form. That means the material is recyclable as well as super strong. If you cut it in half, then put it back together, it will reconnect as one unit. That’s called self-healing, Garcia said.

“You could possibly use [these materials] as adhesives, putting two things together that form a new bond,” she said.

In semiconductor chips, the materials could be used to rework high-value but defective manufactured chips.

The Science paper was authored by a team of academics from Texas A&M University as well as from researchers at IBM’s San Jose and Tucson, Ariz., locations.

“We think this is going to have a huge effect,” Hedrick said.

Materials science is often viewed as a mature field, as polymers were discovered decades ago. These new polymers are formed through a condensation reaction where molecules join together and lose small molecules as byproducts such as water or alcohol. They were created in a relatively simple procedure and are quite tunable, with different materials resulting from different temperatures.