IBM is placing its considerable heft behind OpenStack, a cloud operating system that kicked off two-and-a-half years ago to enable any organization to create and offer cloud computing services running on standard hardware. The nonprofit Open Stack Foundation manages the product, and IBM announced it would be a big-time sponsor last April. 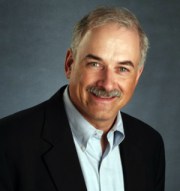 “It’s a vote of confidence for the maturity of the [OpenStack] technology,” said Robert Leblanc, the senior vice president of IBM Software (pictured, left), on a conference call with the press. IBM made the announcement at its Las Vegas cloud conference “PULSE,” which began Sunday and ends Friday.

The hope is that IBM’s existing customers will adopt open source-based technologies, which can be ported across hybrid cloud environments.

IBM is a long-time contributor to the OpenStack project, along with companies like Rackspace, Dell, Cisco, and Yahoo.

“I think the first couple years of OpenStack is really about helping people run and configure it,” said Scott Sanchez, Rackspace’s strategy lead for Open Cloud in a recent interview with VentureBeat. “But we are seeing a tremendous amount of traction,” he said.

Going forward, IBM will dedicate 500 of its developers to work on open cloud projects. IBM also announced that its Smart Cloud offering (the cloud portfolio used by 5,000 customers) will incorporate open cloud pieces. “It brings along so many capabilities ” said Leblanc, who pointed out Smart Cloud launched before there even was an Open Stack movement.

IBM’s rebranded offering, “SmartCloud orchestrator,” is currently in beta testing. Benefits for customers include a reduction in operational costs, better integration with third party tools, and a simplification of cloud services.

Jim Smith, a managing partner for Mohr Davidow Ventures, said this is a step forward in “breaking the chains for high cost technologies.” On the conference call, he said that for large businesses and entrepreneurs, “the canvas for innovation is moving to the cloud.”