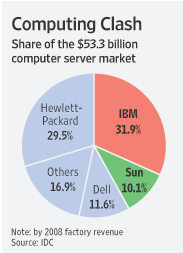 IBM has withdrawn its $7 billion acquisition offer to buy Sun Microsystems, shelving at least for the moment a merger that would have created a dominant global market leader in computer servers.

The collapse of talks hammered Sun’s stock price. It dropped 23 percent to around $6.50, or well below the purchase price being talked about — reportedly around $9.50. However, in a sign the market doesn’t believe the talks are over for good, Sun’s shares remain higher than the $4.97 level they were at before news about a possible deal with IBM arose.

Multiple news reports said that the deal foundered Sunday after Sun’s board rejected a formal offer by IBM, saying the deal price was too low — and this led IBM to withdraw its offer. The New York Times said Sun was bothered by IBM’s lowering of its bid to $9.40 a share from an initial $10 to $11 a share. IBM may have bet that Sun really needed the deal — something most observers also believe, given’s Sun’s struggles of late — and that Sun would be forced to take the lower bid or look like a lame duck if IBM walked away. Meanwhile, the Wall Street Journal reported that Sun’s board was split over the prospective sale, with a group led by CEO Jonathan Schwartz allegedly favoring a deal, and a faction led by Chairman and co-founder Scott McNealy opposing it.

Keep in mind that these sorts of politics are typical in any negotiation, and so this doesn’t really mean the deal is through.