Tech companies have a preferred term to describe their most ambitious and meaningful projects: “moonshots.”

Google chief executive Larry Page borrowed it from John F. Kennedy, who 50 years ago challenged Congress and the nation to put a man on the moon. Today, IBM executives used the term to describe how the Watson super computer is fighting cancer, and a new initiative that is a veritable moonshot.

IBM’s stab at bringing information technology to healthcare is more than just a publicity stunt. The technology giant is working closely with the MD Anderson Cancer Center at the University of Texas, which is one of the top cancer research facilities in the country. MD Anderson launched a program last year to eradicate eight different forms of cancer, with an initial focus on Leukemia.

“I’m exceptionally optimistic about what the future holds in the potential treatment and eradication in these forms of cancer,” Steve Gold, IBM’s vice president of marketing for Watson Solutions, told VentureBeat in an interview.

After all the hype around Watson, a computing system that crushed humans at Jeopardy, we mostly forgot about it. That’s because IBM’s team of engineers has been heads down, feeding Watson information, so it can understand the language of medicine and not just general knowledge.

At a press conference today, held in conjunction with MD Anderson’s oncologists, IBM executives introduced Watson’s newest capabilities. Since 2011 and the infamous Jeopardy win, Watson has ingested over 25,000 medical cases. 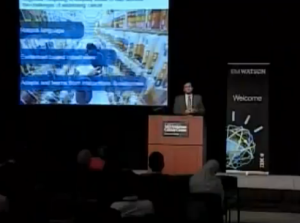 “Watson is learning and understanding diagnosis paths and treatment options,” said Manoj Saxena, general manager of IBM Watson Solutions. “It learns by answering questions, and it learns by doing.”

Saxena said IBM is ready to make a big a bet on Watson, as it did in the 1970s when it invested in the emergence of the mainframe. Watson heralds the emergence of “thinking machines,” which learn by doing and already trump today’s knowledge retrieval machines.

How are physicians using it?

At the conference, Saxena delivered a live demo of how Watson is storing genetic and therapeutic patient information and recommending treatment.

Dr. Courtney DiNardo, a clinical researcher with MD Anderson, showed the audience how the pilot program worked in practice. A few months ago, one of her patients developed a potentially life-threatening complication that sometimes occurs during leukemia treatment, called tumor lysis syndrome. The technology alerted her to the complication, and Dr. DiNardo was able to take steps to prevent it from causing kidney failure or a heart attack.

The Watson-powered technology is referred to as the MD Anderson’s Oncology Expert Advisor (or internally, as the “OEA”). Treatment today is far more “accurate and evidence-based,” Dr. DiNardo said.

“Based on evidence as well as experiences, our physicians can offer our patients a better chance to battle their cancers by participating in clinical trials on novel therapies,” she said.

Still, physicians stressed that Watson would not replace physicians entirely, contrary to recent remarks from Silicon Valley investor Vinod Khosla, which sparked indignation. Dr. DiNardo noted that the OEA could not interpret EKG results or sign an informed consent document.

What’s next for Watson?

According to Gold, it’s still early days for Watson, as the technology only recently announced its commercial availability for the health sector. 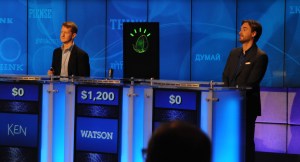 Above: Watson is far more economical today than 2011, when it destroyed humans at Jeopardy.

I asked Gold whether Watson would be affordable for hospitals around the country — and not just well-funded institutions like MD Anderson. He stressed that the technology is modern, cloud-based, and is far more economical than it used to be.

“In the Jeopardy days [in 2011], Watson was running off 90 servers and could store 15 terabytes of memory,” said Gold. That’s not your typical household integration. “Now it’s far more affordable and runs 240 times faster, so we can do far more with less.” Moreover, the size of IBM’s server is now smaller than a pizza box and can fit in any data center.

Gold envisions far more use cases for health care beyond cancer treatment and preventative care. Watson is working with medical students at the Cleveland Clinic to help them bone up on current knowledge for their examinations — it is also learning in the process, so the program is mutually beneficial.

Another key problem that might be solved with next generation information technology is tracking pharmaceuticals. Patients can get confused about whether they should take medication 3 or 4 times a day, and whether it should be ingested after they eat. Watson’s evidence-based system could deliver real-time recommendations to patients, based on their medical history. Likewise, physicians could track whether patients are taking their medication on time.

Indeed, the possibilities are endless for a technology that is designed to get smarter over time.

“In future, our kids will look back and say, ‘I can’t believe you used to use chemotherapy and sit on the phone for 20 minutes waiting for help,’ said Gold. “This is the type of technology that will change how physicians use evidence as part of their everyday decisions.”