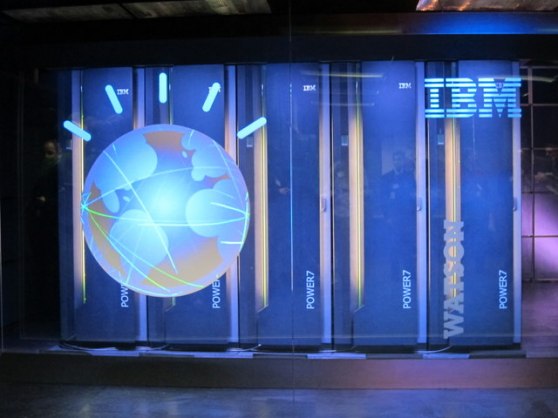 IBM’s Watson supercomputer has already proven that it can trounce puny humans in Jeopardy. Now the company is positioning Watson as a smarter successor to Siri, Apple’s popular (but often ditzy) iPhone virtual assistant.

But first, IBM has to make Watson less of a power hog for mobile devices and give it additional “senses” (such as voice and image recognition), the company told Bloomberg’s Sarah Frier.

When Watson was first announced in January 2011, IBM termed it as “an analytical computing system that specializes in natural human language and provides specific answers to complex questions at rapid speeds.” Jeopardy was a fantastic way to show off Watson’s rapid-fire manner of thinking, as well as its capability to understand the way humans normally speak.

Even though much of Watson’s brain sits in IBM Research’s Yorktown Heights, New York headquarters, the company says that Watson’s current software would still be too overwhelming for mobile devices. IBM is working on an upgraded “Watson 2.0” that will be more energy efficient for tablets and smartphones. The addition of “senses” would also make Watson more aware of its environment, which would be an important part of bringing the service to mobile.

Focusing on mobile devices seems like a logical direction for Watson, especially as mobile devices get faster and 4G LTE networks make it easier to transmit huge amounts of data. It’s also one of the many ways IBM expects to increase its business analytics revenue to $16 billion by 2015, the company told Bloomberg.

Much like how Wolfram Alpha adds all sorts of interesting reference and computational capabilities to Siri, Watson could tap into a wealth of information online, along with sensor data from your smartphone, to help you make complex decisions.

In the example Bloomberg gives, a farmer could ask Watson for the best spot in his field to plant corn. Watson could then tap into historical records, location data, and recent scientific research to give an informed response. (And yes, this all sounds a bit like a proto-Skynet.)

Since the beginning, IBM also mentioned that Watson could be a useful tool for the healthcare industry, especially when it comes to making diagnoses. (The company also formed a research partnership with Nuance last year to help prepare Watson for health care purposes.) Going mobile would further Watson’s usefulness for doctors and patients alike.

IBM is testing a program that would allow patients to detail symptoms to Watson, and the A.I. would then offer up potential diagnoses. The company says Watson will eventually be well versed enough in oncology to help with diagnosis and prescriptions. For now IBM is developing this capability for doctors, but eventually it sounds like patients may be able to tap into Watson’s medical smarts on their own.