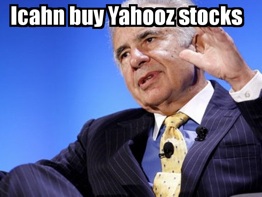 We’ve known that billionaire investor Carl Icahn had been trying to buy massive amounts of Yahoo stock to push ahead with his quest for a hostile takeover of the company. One speed bump in that plan was the Federal Trade Commission, which sometimes frowns upon massive stock purchases as being anti-competitive. That speed bump has been removed. The FTC approved Icahn’s purchase request today.

This puts Icahn squarely in the drivers seat if he wants to go ahead with taking over Yahoo by installing his own replacement board of directors. The question now is: When will this all go down?

Last week, Yahoo delayed its board meeting which had been set for July 3, when one of its board members resigned. The meeting should take place sometime near the end of July now, however no firm date has been set.

In related news, Microsoft chief executive Steve Ballmer and Yahoo chief executive Jerry Yang met for a round of golf last weekend. They are said to have discussed Microsoft’s new desire to buy just Yahoo’s search business. This follows the failure by both sides to get a deal done that would have merged the two companies completely.

It’s probably a good bet that Icahn’s name came up as well.