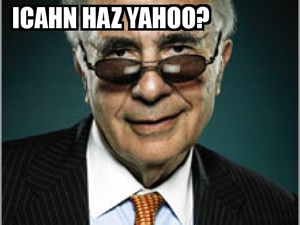 Microsoft bit off Yahoo’s arm. It was messy, but Yahoo was able to kick Microsoft in the nose and swim away. However, now there is blood in the water — a lot of it. And here comes a more aggressive shark: Carl Icahn.

Icahn, a billionaire financier, sent an open letter to Yahoo Chairman Roy Bostock today. In it, he very matter-of-factly states exactly how the Yahoo shareholders, led by him, intend to take over the company by way of a proxy battle to replace Yahoo’s board of directors. This letter was everything that Microsoft’s letters to Yahoo during the “formal letter wars” weren’t: short, sweet and very clear.

Icahn says he and his fellow shareholders feel that Yahoo was simply wrong to reject Microsoft’s initial offer of $31-a-share at a time when the company was trading in the $19-a-share range. A Microsoft/Yahoo partnership is the only logical combination to challenge industry leader Google, he says.

This letter is almost like a tutorial for Microsoft on how it should have gone about taking over Yahoo rather than continually threatening to do so. Icahn’s three main steps for how to take over Yahoo:

1. During the last 10 days, I have purchased approximately 59 million shares and share-equivalents of Yahoo

2. I have formed a 10-person slate which will stand for election against the current board

3. I have sought antitrust clearance from the Federal Trade Commission to acquire up to approximately $2.5 billion worth of Yahoo stock

Icahn also includes the biographies of all the members of the board he is putting forward. There are some good names on the list including: Dallas Mavericks owner Mark Cuban (who sold Broadcast.com to Yahoo in 1999), venture capitalist Adam Dell, two Hollywood heavyweights (former Universal chairman and CEO Frank Biondi and New Lines Cinemas co-chairman and CEO Robert Shaye) and, of course, none other that Carl Icahn himself.

Icahn closes by imploring Yahoo to listen to its shareholders and re-enter negotiations with Microsoft. He lets it be known that he’ll call off the dogs if that happens. Otherwise, this proxy fight, unlike Microsoft’s threat of a proxy fight, is going to happen.

Note: The title of this piece (see: here) was just too good to pass up on — after we wrote the piece, we found a couple others who thought so as well.

[Photo by Sarah A. Friedman/Fortune]