Contrary to popular belief, the adoption of smartwatches, fitness bands, and activity trackers is on the rise worldwide. That’s according to IDC, which today reported that the global wearables market grew 31.4 percent during the fourth quarter of 2018, reaching a new high of 59.3 million units. Moreover, year-end 2018 shipments totaled an impressive 172.2 million units, up 27.5 percent from 135 million shipments in 2017.

It’s worth noting that IDC recently revised its taxonomy — inflating the numbers somewhat — by expanding its definition of wearables beyond the wrist to “hearables,” that is, headphones and earbuds.

“The market for ear-worn wearables has grown substantially this past year, and we expect this to continue in the years to come,” said Jitesh Ubrani, senior research analyst for IDC’s Mobile Device Trackers team. “It is the next battleground for companies as these types of headphones become a necessity for many, given the exclusion of headphone jacks from modern devices. Add to that the rise of smart assistants and in-ear biometrics, and companies have the perfect formula to sell consumers on a device that’s complementary to the device ecosystem that lives on their wrist and in their pocket.”

According to IDC, growth in Q4 2018 was largely fueled by new wearables launched in the months leading up to the holiday season, in addition to smartphones bundled with wrist-worn gadgets from top brands. The popularity of ear-worn devices — a category that includes wireless earbuds like Apple’s AirPods, Google’s Pixel Buds, Bose’s QC35II, and more — also contributed substantially. This group alone captured 21.9 percent of the market (up 66.4 percent) in 2018, according to IDC.

As for smartwatches, they grew 55.2 percent compared with Q4 2017 and accounted for 34.3 percent of the overall wearables market during Q4 2018, while wrist bands snatched 30 percent.

That’s more or less in line with findings from research firm Strategy Analytics, which reported last month that Apple took 51 percent of the smartwatch market in Q4 2018, with 9.2 million Apple Watches shipped.

Xiaomi snagged the second-place spot among the top five wearables manufacturers for the fourth quarter 2018, with a 12.6 percent slice of the hyper-competitive market (up from 11.6 percent in Q4 2017) and 7.5 million units shipped (up from 5.2 million). Moreover, it saw year-over-year growth of 43.3 percent — last year, it shipped 23.3 million wearables overall (up 44.6 percent from 16.1 million in 2017), giving it 13.5 percent market share (compared with 11.9 percent). IDC credits the company’s recent investments in European and Asian countries with this growth. 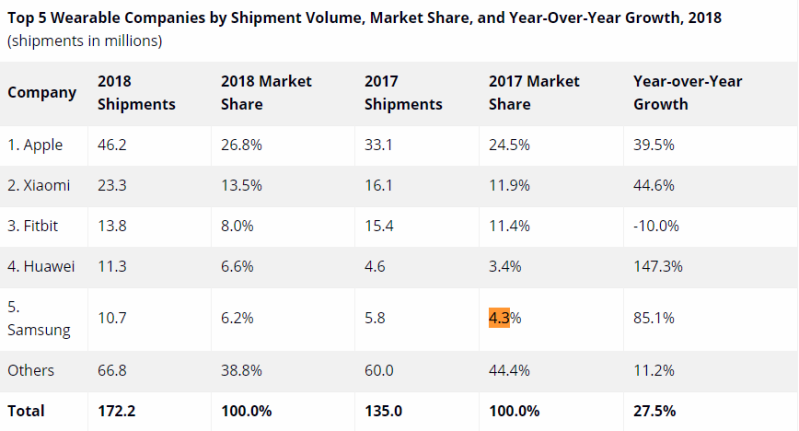