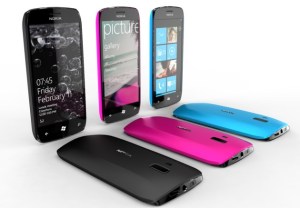 In its latest forecast of the smartphone market, research firm IDC has predicted that Windows Phone 7 will capture the No. 2 spot in market share by 2015, between Google’s Android at No. 1 and Apple iOS at No. 3. Rival research house Gartner also predicted similar results in April.

The predictions by IDC and Gartner stem from the new partnership between Microsoft and Nokia, with the idea in mind that Nokia will help spread the WP7 platform in markets outside the U.S. IDC writes:

Windows Phone 7/Windows Mobile will benefit from Nokia’s support, scope, and breadth within markets where Nokia has historically had a strong presence. Until Nokia begins introducing Windows Phone-powered smartphones in large volumes in 2012, Windows Phone 7/Windows Mobile will only capture a small share of the market as the release of Mango-powered smartphones are not expected to reach the market until late 2011. Nevertheless, assuming that Nokia’s transition to Windows Phone goes smoothly, the OS is expected to defend a number 2 rank and more than 20% share in 2015.

Outside of its high praises for Windows Phone, the rest of what IDC is predicting is par for the course. It expects Google’s Android OS to grow from its current 38.9 percent to 43.8 percent of smartphone market share.

“A significant and growing list of vendors who have made Android the cornerstone of their respective smartphone strategies is propelling the growth of Android,” IDC wrote.

When it comes to Apple’s iOS, IDC expects the platform’s share to decline from 18.2 percent 16.9 percent. IDC makes the case that iOS will remain the No. 3 player in total market share because it has already incurred most of its gains for the projected period.

“After an initial explosive growth period, iOS is expected to grow at a more modest pace throughout the latter half of the forecast as the smartphone market matures and diversifies,” IDC wrote.

IDC indicates that other smartphone OSes in the marketplace are expected to shrink. Not surprisingly Nokia’s Symbian platform, which has been abandoned, is expected to drop from 20.6 to 0.1 percent. RIM’s BlackBerry OS could drop from 14.2 to 13.4 percent.

While it’s hard to predict what will happen in four years, I agree for the most part about Android. It appears to be on a wild ride upward that won’t stop in the near future. I also expect Windows Phone 7 to make significant gains in the next few years with Nokia’s help in emerging markets but not necessarily at the rate IDC is predicting. And who knows what will happen with iOS? If Apple puts iOS on even more mobile devices, its potential could soar. 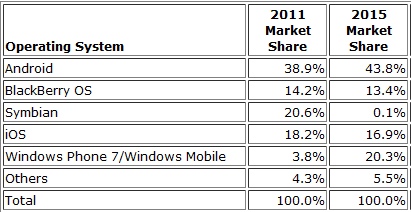