Despite expectations that big tech companies will dominate wearables just as they have with smartphones and tablets, the little guy continues to hold on. In Q1 2016, Fitbit took first place again, while Xiaomi managed to steal second place from Apple.

Mobile companies shipped a total of 19.7 million wearables worldwide last quarter. That figure is up 67.2 percent from the 11.8 million units shipped in Q1 2015.

Because this is still a young market, the top five vendors will shift places almost every quarter. The latest figures come from IDC, which summarized its findings in the following chart: 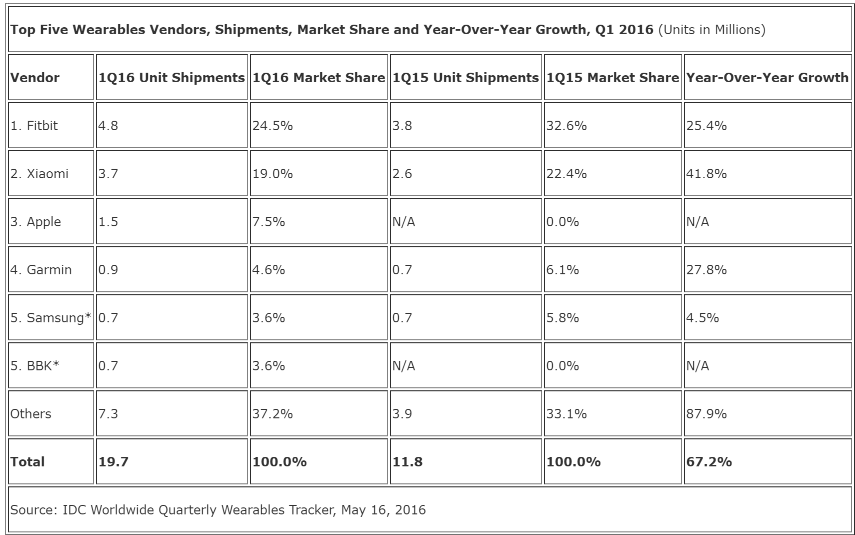 As you can see above, Fitbit’s market share actually decreased by 8.1 percentage points (from 32.6 percent to 24.5 percent), despite shipping 1 million more devices (4.8 million total). Still, the company managed to capture almost a quarter of the whole pie.

As IDC put it, Fitbit began 2016 the same way it finished 2015: as the undisputed leader in the wearables market. Its new Alta and Blaze devices shipped in the million-unit shipment range each. Its previously successful Surge, Charge, Charge HR, and Flex product lines naturally declined.

Xiaomi also lost market share, slipping 3.4 points (from 22.4 percent to 19.0 percent), though it shipped an additional 1.1 million units. The Chinese company expanded its line of inexpensive fitness trackers to include heart rate monitoring and a kids’ watch to help parents track their children. While this made it possible to capture second place, IDC points out that its success is solely based in China, and international expansion will be tough.

Apple meanwhile debuted at 7.5 percent, shipping just 1.5 million units. While we can’t compare year-over-year growth, it’s worth noting that the Apple Watch has held second place for the first three quarters of its existence, shipping 3.6 million in Q2, 3.9 million in Q3, and 4.1 million in Q4. It appears that Q1 is the odd one out, and the Apple Watch 2 will have to ensure the decline doesn’t turn into a trend.

“The good news is that the wearables market continues to mature and expand,” IDC’s Ramon Llamas said in a statement. “The wearables that we see today are several steps ahead of what we saw when this market began, increasingly taking their cues from form, function, and fashion. That keeps them relevant. The downside is that it is becoming a crowded market, and not everyone is guaranteed success.”

Garmin’s share slipped 1.5 points to 4.6 percent. Its wristbands and watches appeal to a wide range of athletes, and it also launched its first eye-worn device, the Varia Vision In-Sight Display, for cyclists.

Samsung dropped 2.2 points to 3.6 percent, with its Gear S2 and Gear S2 Classic smartwatches keeping it alive. BBK managed to tie Samsung thanks to its Y01 and Y02 phone watches for children, making this the second time it has made the cut for the top 5 vendors on IDC’s list.

IDC points out that the growth in the market can be broken down into two categories: smartwatches and basic wearables (devices that do not run third party applications).

In other words, wearables currently consist of a do-it-all category and a specialized category. The firm argues that the two can coexist, thanks to differences in price and performance. We’re not convinced this can last for long.