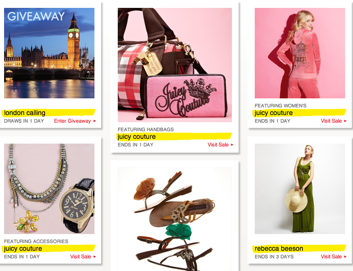 New York-based Ideeli, a members-only shopping community — known commonly as a “Flash sales” site — has raised $41 million in its third round of funding.

The site, which has over 4 million members, offers limited-time offers on apparel, accessories, shoes, and jewellery, intended to target men, women and children. Starting at 11am each day, sales last for 36 hours or until sold out, and have featured prominent brands such as Calvin Klein, D&G, French Connection.

With players such as Groupon and LivingSocial carrying multibillion dollar valuations, the deal shopping space has seen a lot of financial interest. Ideeli’s main and closest competitor, Gilt Groupe, has also raised up to $100 million and is supposedly in talks to raise another $80 – $100 million from private investors.

Ideeli was founded in 2007 and raised a $3.8 million round in December that year, following up with a $20 million round in 2008. The latest round brings its total funding to $64.8 million. Investors in this round include Next World Capital with Cue Ball Capital, StarVest Partners, Constellation Growth Capital and Kodiak Venture Partners.