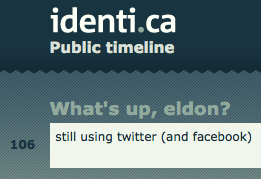 How many ways can you send 140-character messages to the people you care about? Tiny Twitter rival Identi.ca is trying to find out, and it’s raised a small angel round from Montreal Start Up to help it in that pursuit. While Twitter has been gaining millions of users through its proprietary micro-messaging platform, Identi.ca’s home site apparently hasn’t grown at all. But that’s not really the point, because Identi.ca is a “federated” messaging service, meaning it lets you create your own Twitter-like systems anywhere.

Twitter has been growing, because sending out short messages to friends is a simple, fast way to share what you’re doing and see what others are up to. But Twitter had trouble keeping its site up due to ever-increasing demand (and, okay, some engineering issues), until the company put massive investments in its core engineering team and ironed things out last summer. Identi.ca launched last July, around the time Twitter stabilized itself, hoping to take advantage of this downtime.

On the other hand, Identic.ca’s federated concept won praise from the likes of open-source advocate Dave Winer and ReadWriteWeb when it launched. At that point, Winer went as far as to say Identi.ca will kill Twitter (hey, it’s not too late!). Identi.ca is based on open-source Twitter-clone software called Laconi.ca, created by Identi.ca founder and chief executive Evan Prodromou. The idea is that Identi.ca is for people who don’t want to deal with Laconi.ca’s code but want to repurpose Twitter-ish features however they want. While Twitter offers an application programming interface to let other sites integrate Twitter messages (called “tweets”), Identi.ca could let other sites remix its features without relying on it or any other service. It also offers integration with the Jabber instant messaging protocol, meaning you can message Identi.ca from within chat services like Gmail. It also integrates with single-sign on service OpenID, so you can create an Identi.ca account using your identity on WordPress, Yahoo, or any number of other services. In other words, it differentiates itself by being as open as possible. 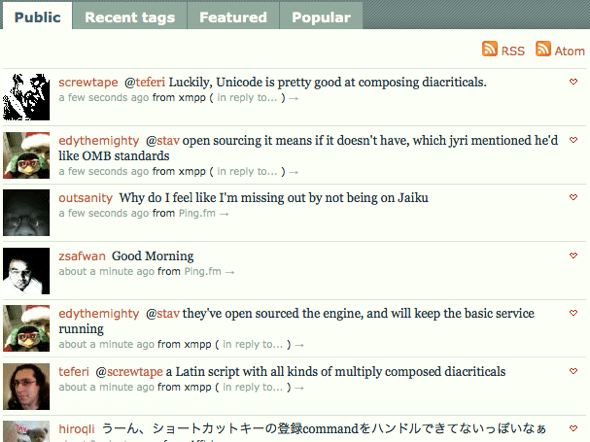 I’m not one to nay-say the micro-messaging concept that Identi.ca is going after. It’s everywhere. A host of other would-be Twitter rivals have also recently entered the picture. Most prominently, Yammer — “Twitter for business” — took home the grand prize at the TechCrunch 50 startup contest last year. It lets you micro-message with people in your company. I don’t know if Yammer has taken off or not, but I’ve anecdotally heard positive reports. There’s also Present.ly, another “Twitter for business.” Then there’s Twingly, another create-your-own-Twitter service (in private beta), Plurk (differentiated by a social timeline), and probably some other small startups that provide similar micro-messaging features. Farther afield, there are services like FriendFeed, which lets you aggregate feeds from all sorts of web sites, including Twitter and Identi.ca, and also lets you micro-message within FriendFeed.

Then, of course, there are the social networks like Facebook, MySpace and hi5 that have offered status update services for years, integrated with the other features on their sites. There’s been some reasonable speculation that Facebook may try to introduce a way for users to publish their status updates across the web; for what it’s worth, Facebook tried to buy Twitter last fall.

The obvious criticism of Twitter — and by default the other competing services — is that there’s no revenue model yet. Prodromou tells GigaOm more on this front:

Prodromou says open source gives the company “commercialization options that Twitter doesn’t [have].” For example the company can charge a fee for public or private implementations, or be the basis for microblogs on other web sites.

Yammer is instead charging user companies a dollar per employee per month. Twitter has money-making plans up its sleeve as well. Assuming the overall growth of micro-messaging services continues, perhaps there’s a place for Identi.ca in offering both customization and easy-to-use messaging features. Then again, Twitter is still way bigger than everyone else and as Twitter cofounder Jack Dorsey said about Identi.ca earlier this summer, “We’ve seen a lot of Twitter clones.”