Identity verification startup Onfido has raised $25 million from Idinvest Partners, Wellington Partners, and CrunchFund. The cash influx will be used to “meet rising demand from the U.S. and international markets,” the company said in an announcement. Onfido had previously raised a little more than $5 million, including a $4.5 million series A round last February, meaning today’s news takes its total funding past the $30 million mark.

Founded out of London in 2012 by three former Oxford University graduates, Onfido uses machine-learning technology to help businesses carry out background checks on people — this could be potential employees at the recruitment stage or community-based marketplaces where “trust” is pivotal to transactions, such as sharing-economy companies like Airbnb, TaskRabbit, or Uber. The checks cover anything from criminal records to driving misdemeanors. 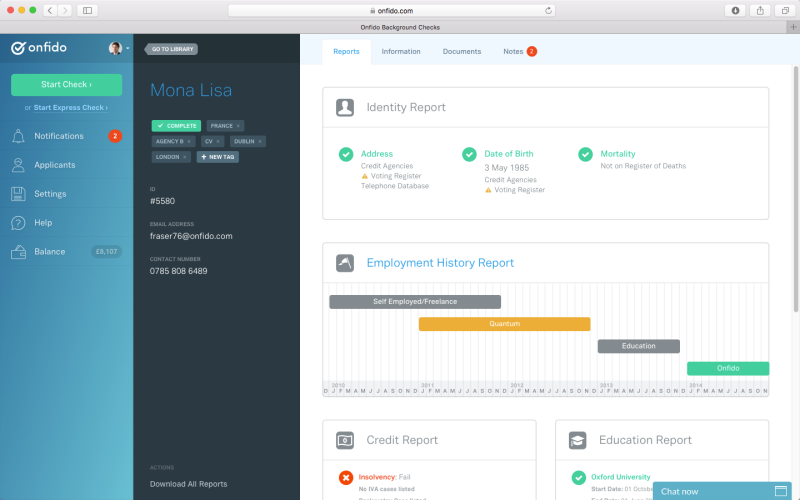 Onfido says it allows businesses to accurately verify the identity of anyone in the world, such as a home-sharing host in London, within seconds. “Only when the identity has been verified do we run further searches, such as Criminal or anti-money laundering checks,” continued Kassai. “This means we can always be certain that we’re checking the right person and prevents individuals from cheating the system by committing identity fraud.”

Onfido has offices in London and San Francisco, and today claims more than 1,000 clients across a number of industries, though it says that sharing economy and fintech firms represent a substantial chunk of its customers, including Handy, Work Market, Turo, and BlaBlaCar, a company that smashed France’s VC funding record last year. With Onfido’s rival Jumio filing for bankruptcy less than a month ago, selling core assets to Facebook cofounder Eduardo Saverin in the process, today’s news perhaps has a little more resonance. Indeed, Airbnb partnered with Jumio for its ID verification service three years ago, and Onfido has already been sniffing around for that business, according to reports.

The company says that it has seen 40 percent month-on-month growth in the U.S. of late, though it didn’t elaborate on what exactly that means. But growing this business in the U.S. is partly what its latest funds will be used for, to help capitalize on a rise in demand stateside as well as in Europe, South America, and Asia. And with the explosion in sharing-economy businesses, trust will continue to be a key factor for consumers.

“Trust is the new global currency,” said Kassai. “Whether it’s home-sharing or transferring money online, digital businesses rely on their users trusting each other in order to function and grow. With our team, our technology, and now Idinvest’s international expertise, we have everything we need to achieve our vision and become a global trust symbol, recognised by companies and consumers alike.”