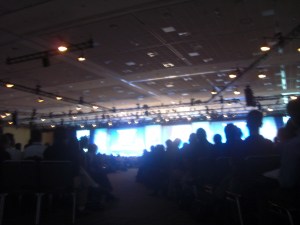 Now the commercial starts. If the morning keynote here at the Intel Developer Forum conference by Intel Chairman Craig Barrett was light on the Intel hard sell, the afternoon is full of it. Pat Gelsinger, head of Intel’s digital enterprise group, is busy touting Intel’s latest products.

For many years, Intel all but ignored the system-on-a-chip and embedded processor markets. But as computers and the Internet infiltrate everything, the company has lined up a new family of chips for everyday gadgets. Gelsinger said that Intel’s low-power Atom chip has been designed into 700 gadgets since its debut less than two quarters ago.

Among the products that will use the Intel Atom chips is OpenPeak’s new IP media phone, which serves as a digital picture frame as well as a touch-screen Internet telephone. (Think the iPhone for the home). Another emerging market is computers in cars. Alex Bush of the BMW Group says his company is embracing the idea of an “open entertainment platform” for the car using Intel’s Atom processors. Yes, we now use smart GPS systems and other sorts of gadgets that, if we don’t pay attention, will get us into more car wrecks. The GPS system features 3-D scenery software from Planet 9 Studios, which hopes to make it easier for GPS users to see where they need to go.

All this Atom talk, however, is just preamble for Intel’s major announcement. Intel is now talking about its newest family of processors, code-named Nehalem, and formally to be known as the Core i7 processor family. This new chip aims to negate two advantages that Advanced Micro Devices has had for five years in its Opteron. (AMD’s Randy Allen, however, says that his company has its own advances on the way that will keep AMD ahead on performance and power efficiency.) The new Intel chip will use similar techniques to the Opteron for managing memory and data transfer.

Nehalem arrives in the fourth quarter, Gelsinger said. The chips will have as many as eight cores, or computing brains, on a single chip. The chip’s basic design is power efficient because it turns off parts of the chip that aren’t being used. That’s been done for at least a decade, but Intel can always improve on it. Gelsinger says that Intel can make these improvements because it controls both design and manufacturing.

Gelsinger said NASA will use a supercomputer with thousands of Nehalem chips for climate modeling and other scientific research. He said Intel is working with digital artists at Sony and Disney as well on the creation of computer animations for movies.

Of course, Intel didn’t want to just beat up on AMD. Gelsinger also talked about Larrabee, Intel’s new graphics-oriented processor with lots of cores on a chip. Gelsinger didn’t say it, but this chip will go after rival Nvidia. Intel showed a video with large numbers of translucent surfaces. The company also said that its memory design makes it easier for game developers to create complex scenes without going overboard on memory usage. In a word, Nvidia says that Larrabee isn’t quite so capable compared to its approach to graphics. You can bet that Nvidia will have more to say at its Nvision 08 conference next week in San Jose, Calif.