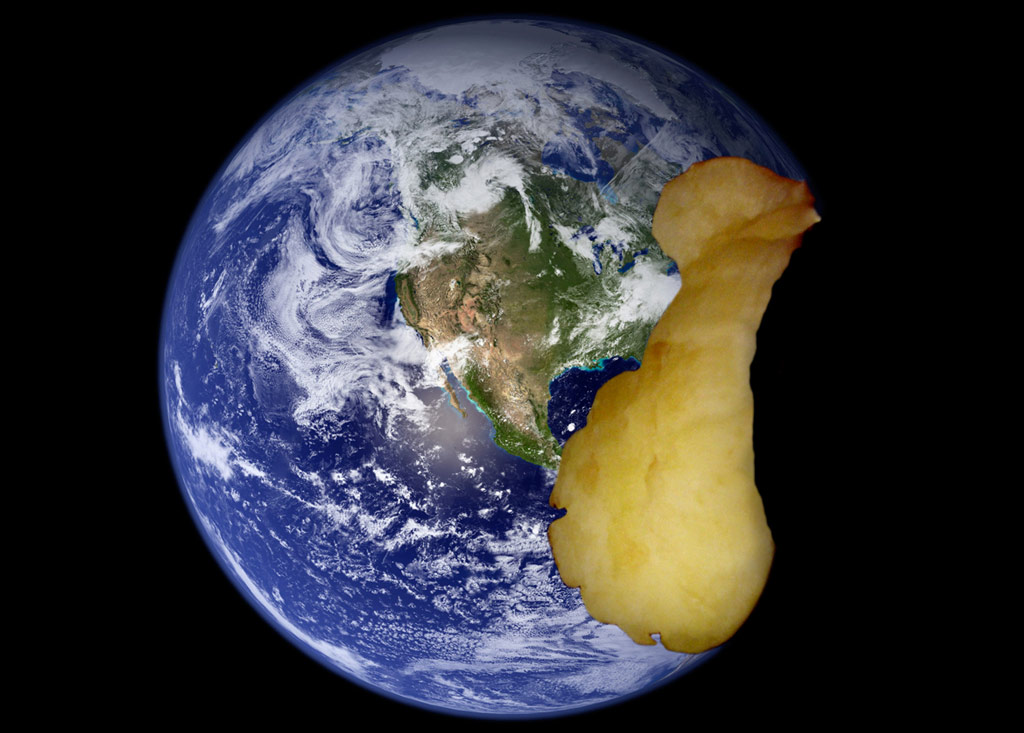 Steve Jobs was never afraid of changing his mind. If Apple wants to continue to be the market leader in smartphones and tablets in 2013 and beyond, a massive, earth-shaking, almost unthinkable change is needed.

Apple’s modus operandi has been to make a limited set of very few products. It chooses those products with almost unbelievable selectivity and with extreme care and attention to detail. This has been a winning strategy for taking Apple to the top. Following this approach has made it the biggest company in the world by market capitalization as well as by the biggest profits.

But staying at the top requires a different set of strategies … which is one reason, perhaps, why Apple stock has fallen 20 percent since September of this year as Android has captured massive market share. And why analysts like Gene Munster are calling for an inexpensive $200 iPhone.

Or, perhaps, even cheaper:

“We imagine an iPhone at a low price point to capture the initial smartphone purchase from customers upgrading from feature phones,” analyst Ben A. Reitzes said recently in a research note for investors. “We believe Apple can sell a phone … below $150.”

The tip of the spear 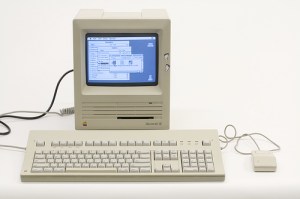 The reality is that Apple has, to a large degree, been the spear-tip of innovation in the computer and electronics industry. The mouse, the graphical user interface, the touch interface, the touchscreen smartphone, the tablet, the immersive, unified, and elegant operating system … these are all innovations that Apple brought successfully to market when others had failed to do so before.

And all of these innovations have been rewarded by sales, market presence, and profits.

But a market-opening strategy — simple, minimal — tends to not work as markets mature and require products that spread out to fill available niches in the new ecosystem. That is precisely what Apple saw, to its pain, in the personal computing industry of the ’80s and ’90s.

Part of the challenge is that as disruptive innovations penetrate a market, the competition becomes less between “amazing vs. awful” and more between “amazing and really, really good.” Or also amazing, but in a different way.

Mac OS was crazy better than Windows 3.1. It was still better than Windows 95, but the gap was not quite so wide — and plenty of people might legitimately disagree with that statement. Even more so about Windows XP, and, by the time Apple and Microsoft had moved on to OS X and Windows 7, the gap in quality, usability, and elegance was even smaller.

(Yeah, I’m a 25-year Mac guy, so I still think it’s a big difference, but that’s a biased and a history-influenced opinion. Objectively, the gap is much smaller than it was.)

Clearly, you can see a parallel in the mobile-operating system world.

In 2007, the iPhone broke our brains. It was so new, so different, so amazing, so incredible, that it seemed like an alien artifact from a technologically superior civilization. It was so much better than Windows Mobile or BlackBerry or Nokia or feature phones that it created its own market space. It invented its own niche.

In 2012, the difference between the iPhone and its competitors is much smaller. 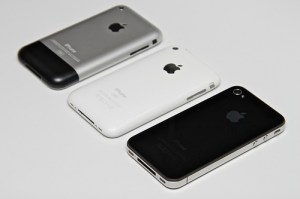 Yes, the iPhone is smoother, cleaner, and has a more elegantly integrated ecosystem of content, operating system, apps, glass, silicon, and accessories. But it’s an incremental advantage over Android. And, again, many would find that statement controversial or just plain wrong, saying that Android  is better than iPhone because of its freedom, openness, capability, and device diversity.

And the reality in the market is that Android is winning. With 75 percent market share in smartphones and rapidly rising market share in tablets, Android seems to be an unstoppable force. Reasons abound for this, including the fact that it’s free for carriers, that carriers can load it up with their own proprietary crapware, that it supports a vast array of devices, and that it presents a way for manufacturers to fight the Apple juggernaut.

Plus, Apple’s core fans are often also Google users, sucking them toward Android devices because it all just works together (where have we heard that before?).

But Android is also pretty bloody good, especially in the last few iterations. It now has a massive app ecosystem, and it benefits from Google’s suite of web-centric services, which is slowly but surely getting more tightly integrated with each other and with mobile devices. And with the latest versions, Android is even looking pretty well designed, too. 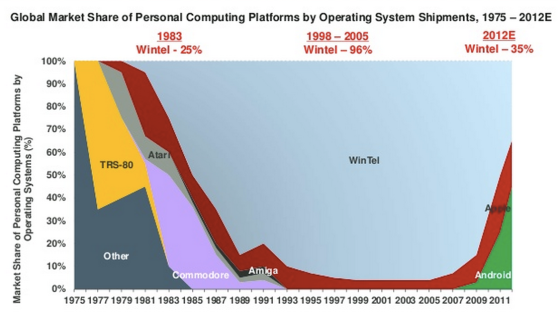 I agree with that, and the reality is that cloud-connected services are really the most important thing for our smartphones to do. We don’t carry a piece of glass and plastic and silicon so we can stay in the little box: We want to get into the big wide world of the Internet.

The problem for Apple, if the current sales and market trends continue, is that iOS will get less and less important, relatively speaking. And those massive profits will start to wither away, start to follow the leaders — the new leaders — and we’ll be back to the ’90s.

But there is another way. 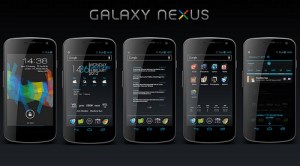 I think that if Apple wants to continue to be the leader — or, should I say, recapture the title — it will need to do something crazy. Something against its current corporate DNA. Something that it has never done in the past.

And that’s coming out with more products at more price points with more aggressive pricing. (It’s heresy, I know.)

Apple analyst Patrick Moorhead agrees, saying that “Apple has done pretty well with its ‘one size fits all’ approach. It won’t be enough in the future to keep a commanding presence like they have today in phones.”

It’s not just about us

That’s true in rich North America and western Europe. Those markets, while they are wealthy, provide great margins for electronics companies, and are easy to focus one because, frankly, we live here. But they are not the ones to look at for growth, because our markets are saturated. Seventy-five percent of all new mobile phone subscriptions on the planet in the third quarter of 2012 were in Asia and Africa, according to a massive Ericsson study.

And guess what: The 3 billion people who don’t yet have mobile phones at all, mostly in India, China, and Africa, are not going to be buying iPhone 5s, or 6s, or 7s when they their first mobile device. They’ll be buying a feature phone, or more likely in the next few years, a cheap Android phone. 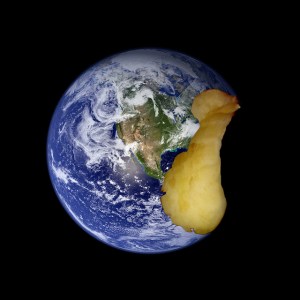 So what, you might say, there are no profits there — just look at Nokia, which still sells a ton of feature phones but can’t make money at it, having to hock its own building just this month. That’s true today. But consumers in developing nations who are poor today may not be poor in the future. Chinese middle class, anyone?

Trends like this have contributed to people like Jay Yarow saying that “Tim Cook has to be worried that his company has become a niche player in the biggest global computing market” and economist Jack Bass reminding us that market share matters and that Apple should make changes to its product and pricing strategy.

Market share does matter, because ecosystem health — diversity of apps, availability of content, compatibility of services, and more — depends on it. Without market share, a platform loses developer share, and a virtuous circle turns vicious.

That’s true even though Apple continues to grow. The problem is that Android is simply growing much faster.

Which is why analysts like Moorhead are saying that Apple needs “features like larger screens, NFC, enhanced security, and even pen support,” because they are attractive to buyers. And if market share is important to Apple, “they will need to more greatly diversify their iPhone portfolio to attract more kinds of consumers and businesses.” 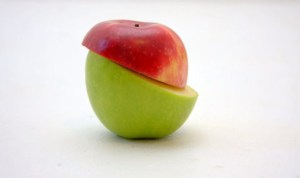 Frankly, it’s not what I expect Apple will do, because I think Apple likes making just a few amazing, excellent, exclusive products. But I think that for the company to get back on top, it must do something crazy. Without a change, those market-leading profits will slow and eventually begin to contract. Apple’s market-leading ecosystem will cede leadership to Google and Android. So even if Apple’s mission in life is defined by creating just a few iconic products, the company might want to remember the lesson of the ’90s and start to change its tune.

The events of the past weeks, in which Apple stock lost $35 billion, then $19 billion, and then dropped below $500 for the first time since February might make this a little less crazy than it sounds.