We’re seeing some scary estimates about how much the NSA spying revelations could cost American technology businesses.

U.S. cloud computing companies could lose between $21.5 billion and $35 billion in worldwide contracts over the next three years as foreign customers cut and run, scared away by what they perceive as aggressive U.S. spying.

That’s the estimate, at least, from the US-based Cloud Security Alliance, as quoted in a report by the Information Technology & Innovation Foundation (ITIF). The group surveyed 500 users of cloud technology and found that “56 percent of non-US residents were less likely to use US-based cloud providers in light of recent revelations about government access to customer information.”

Moreover, some 36 percent of U.S. residents surveyed said the NSA leaks have made it more difficult for them to “do business outside of the United States,” the ITIF report said.

The ITIF acknowledged that its estimates were a rough guess. It based the $21.5 – $35 billion cost on assumptions that the U.S. will eventually lose between 10 and 20 percent of the foreign market to European or Asian competitors and will retain its currently projected share of the domestic market.

Companies expected to get hit are those that offer file storage and computing services in the cloud. Some US companies said they have already lost business.

The report found that Europeans, in particular, are trying to edge out their American competitors, and they are enlisting their governments in this effort. Even before the recent spying revelations, governments in France and Germany were advocating national cloud efforts to counteract concerns that the U.S. Patriot Act could compromise the security of data stored by U.S. companies. Indeed, France’s second largest carrier, NFR, rounded up $300 million to invest in a French competitor to Amazon — which was showcased at our CloudBeat conference last year. Witness the apparent UK glee at the NSA problems in this report. A German minister’s call for a boycott of U.S. cloud companies is reported here.

However, what this analysis is missing is a clear indication of where the lost business will actually go.

Sure, in many cases, executives in European countries may feel like transitioning business to a national cloud provider is safer. But Brian Jacobs, partner at Emergence Capital Partners, says he doubts the costs will be as large as the ITIF estimates, in part because there’s a lot of concern everywhere about government tracking.

Even in European countries, citizens are sometimes skeptical of government intentions, not to mention in Asia.

Here’s what Jacobs told me in an email exchange:

I think many foreign Internet users trust the US government more than their own. While we are not universally liked around the world, most people understand that we have a high degree of transparency and due process compared to other governments, and we try not to arrest innocent people due to their beliefs, sexual preference, religion, etc. It would not surprise me if many foreign internet users suspect their governments are snooping on their internet traffic, whether they use US services or local ones.

While government snooping may create a drag on usage, it hasn’t stopped incredible expansion to demand. We know China spies on its citizens, but I count 15 billion-dollar Chinese Internet companies, all created in the last 15 years.

It remains to be seen how severe the hit will be, and it depends in part on whether we hear of other governments having Prism-like programs of their own, something venture capitalist Marc Andreessen also points out.

Still, it doesn’t help that the U.S. Congress appears somewhat frozen in how to respond to the constant leaks about the NSA activities — with leading lawmakers saying they feel limited in their ability to challenge its scope and legality.

Editor’s note: Our upcoming CloudBeat conference, Sept. 9-10 in San Francisco, will be tackling revolutionary cases of enterprise cloud usage, including how security is increasingly important in the light of the recent NSA leaks. Register today! 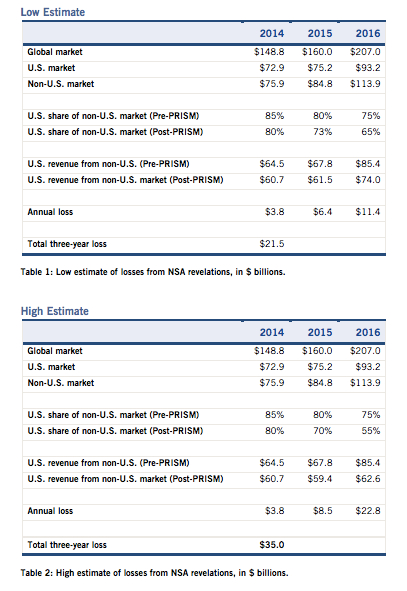 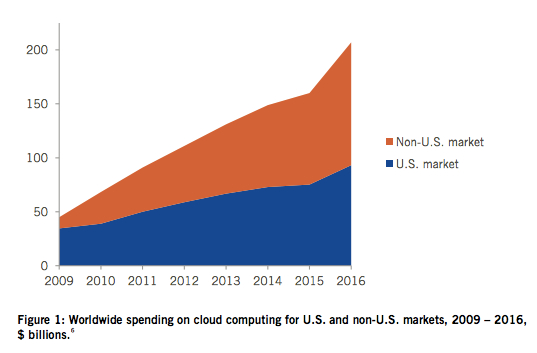