Today IFTTT, a company that connects AI-powered assistants, wearables, apps, and the Internet of Things, will terminate three of its apps, launch a new app, and kill off the recipes its been known for since its launch in 2010.

Recipes will be replaced by “applets.” Some applets will have the same 1-1 connections that allow you to post an update to LinkedIn and Facebook at the same time or turn on your sprinklers with Google Assistant. Other applets will be more like bundles of multiple actions that take place all at once, so you could say “Morning routine” to Alexa or Google Assistant to have the coffee maker turn on, the temperature change, the lights switch on, and your morning playlist begin.

In August, IFTTT began to allow partner companies to create their own recipes. Last week, about 60 Google Assistant recipes were added to IFTTT that allow you to connect so you can control electronics, send messages, or create your own custom commands.

Companies that will make the first bundles of applets include FitBit, Philips Hue, and D-Link motion sensors. The more than 100,000 developers who have used IFTTT will be invited to make more complicated processes to tie together the 360 services available, CEO Linden Tibbets told VentureBeat in an interview at the IFTTT office in San Francisco. 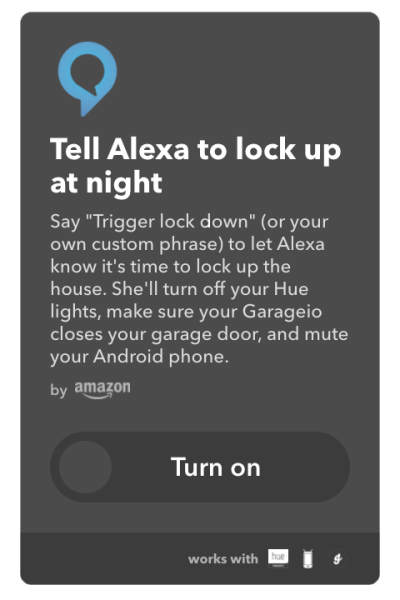 The three apps that are being consolidated into a new IFTTT app are Do Camera, which built recipes right into the camera; Do Notepad, which did the same for notes; and Do Button, which acted as a dashboard for quick one-tap actions, like turning on lights or turning up the temperature.

Created in 2010, IFTTT has been through several technological evolutions. In the beginning, IFTTT was mostly a blend of social networks and apps like Evernote, so you could save a link to the tweet you favorited in Pocket or automatically post an Instagram photo on Twitter. Over time, wearable and IoT devices were incorporated into recipes, and now virtual assistants like Alexa and Google Assistant are part of the platform. Today, the company connects more than 360 different wearable and Wi-Fi enabled IoT devices.

For a while, the company was known for automation, but IFTTT isn’t about automation, Tibbets said, and he doesn’t want IFTTT to be thought of as a dashboard for Internet of Things — like Apple Home or the startup Mosaic.

“Rather than a kind of work flow or automation tool, what IFTTT is really about is PayPal for access, so when one service wants to access another service, we think over time that can happen through IFTTT, and it’s happened like that already in a lot of cases,” Tibbets said.

Despite the new names for recipes and the changes through the years, the focus on connecting services will continue, Tibbets said.

“You can have the world’s best assistant, best voice interaction, but if it doesn’t have access, it’s kind of like Einstein in a dark closet. It’s this really smart thing that can’t do anything for you, it can’t know anything about you, and so we’re really excited to be in that mix trying to enable [a more intelligent] future,” he said.