ILMxLAB showed off its Star Wars: Project Porg at the Magic Leap L.E.A.P. conference. The demo I saw will be available as part of a larger free download on the Magic Leap One Creator Edition augmented reality glasses in December.

I got to experience the cute little creatures in full AR, as ILMxLAB executive in charge Vicki Dobbs Beck and Michael Koperwas (a mixed reality supervisor there) explained what was happening before my eyes. Dobbs Beck noted it was an interactive “experience,” not a game.

“We tried really hard to bring an authentic Star Wars character to live in a world with us,” said Koperwas, who works at the Lucasfilm division, dedicated to emerging platforms, in an interview with GamesBeat.

I had to wait a bit to get a proper prescription lens that enabled me to see without glasses. But once I had the right one, the porgs came to life.

The Star Wars droid C-3PO came to life as a hologram, talking about the little porgs that appeared in Star Wars: Episode VIII — The Last Jedi. Anthony Daniels voiced C-3PO, who was wondering where the porgs had gone, one of the creatures peeked over a virtual object on the floor.

Through the Magic Leap glasses, I could see the animated porg waddling around, like a penguin, on the carpet in the real-world room. The porg was not perfectly placed. Sometimes it seemed like it was walking on air. But it looked fairly realistic in terms of the animation’s ability to blend in with real life. 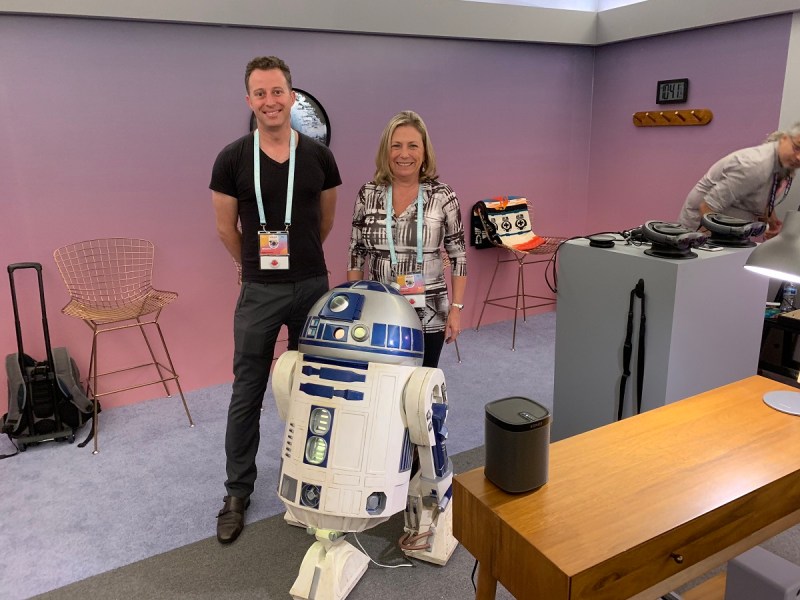 Above: Michael Koperwas and Vicki Dobbs Beck of ILMxLAB.

I used the remote control in my hand to grab some snacks and scatter them around the room. The two porgs started going after them. Then the porgs started wandering everywhere — on top of the TV stand, on shelves, on tables, and the floor.

“You can get them to change the channel on the TV, and they will watch it,” Koperwas said.

In fact, the porgs watched a TV show with Chewbacca on it, and they got sleepy while doing so.

Dobbs Beck said ILMxLAB has been collaborating with Magic Leap for four years. The idea was to create a relationship with characters over time.

The goal of the free download for Magic Leap was to spark people’s imaginations. But that demo will not interact with devices in the real world. That part is simply part of the Magic Leap event demo.

Paul Kavanagh, an ILM animation supervisor, contributed to the project in addition to the San Francisco-based ILMxLAB team, which has been working on virtual reality, AR, and mixed reality projects since 2015.

ILMxLAB has also worked on the hyper reality experience Star Wars: Secrets of the Empire. And last month, ILMxLAB announced Vader Immortal: A Star Wars VR Series in collaboration with Oculus for the Oculus Quest VR headset. The team is also working as the exclusive producer for five original Disney experiences for The Void platform.

Yes, the porgs were insufferably cute.

C-3PO closed with the joke, “May the porgs be with you.”