Hi5 decided to bet big on games and “social entertainment” starting last year — by the end of 2009 it hopes to have 3-D avatars for its users, that they can use within games. Today, it has come a little bit closer to its vision, introducing a web-based instant messaging feature. It’s a sort of static bar that you see at the bottom of every page on the site, and use to chat with friends within the site, similar to what Facebook and other companies offer.

Hi5’s management sketched out its transition to a more gaming-focused site to me back in January, a transition that it hopes can produce more revenue through virtual goods than the site has been able to produce through banner advertising. In December, it launched a gifts store and its own virtual currency, called Coins, then it launched a games sub-site in early February. In the last couple of months, it has been partnering with mobile payment companies and is in the process of syndicating casual games offered by Mochi Media. 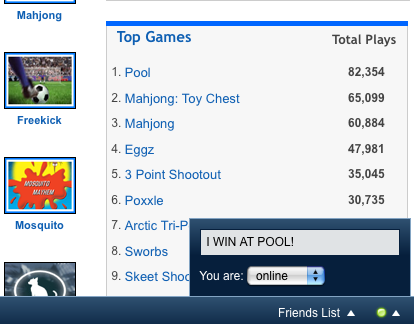 IM, as rivals like Facebook have been discovering, is another way to get people sharing more information and potentially staying on the site longer to do things like play games. Facebook’s IM service rolled out more than a year ago, and includes ways for users to do things like invite each other to third-party application games. Other social networks, like MyYearbook, have meanwhile opted to use a white-label IM toolbar service offered by Meebo.

Hi5, for its part, is also working on making IM more engaging. You can update your status on the site from IM, for example, so your friends can see it when they browse your Hi5 profile. Other features include a way to send Hi5-style “star” emoticons to friends (instead of the smiley emoticons you see on other chat services). More generally, I’d expect to eventually see slicker integration with games, like a way to invite a Hi5 friend to play a game through an IM invite.