Oculus VR founder Palmer Luckey confirmed to The Daily Beast that he is money behind a group of alt-right “shitposters” who plan to spread memes disparaging Hillary Clinton, like a billboard in Pittsburgh that claims the former U.S. Senator and Secretary of State is “too big to jail.” And that revelation about the father of modern virtual reality, which he confirmed on Facebook, doesn’t shock me at all.

I’ve spoken with Luckey only a couple of times over the years, but we’re also friends on Facebook. That never really meant anything until July, when he responded to a news story I shared that points out that police deaths are more rare under President Barack Obama. Luckey claimed the story is “poorly written and poorly argued.” He also reiterated the argument the article was trying to debunk: that Obama’s criticism of the criminal justice system and support of Black Lives Matter protesters encouraged anti-police violence.

“The president should not be making public comments on specific cases before the facts are known, especially if he is going to take a side and appeal to emotion,” wrote Luckey. “He has done both repeatedly.” 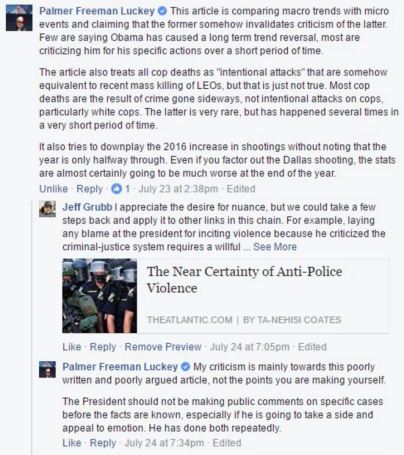 I instantly recognized Luckey’s argument. It’s something you would read on extreme right-wing blogs like Breitbart. It’s the same logic you’d get from scrolling through the #AllLivesMatter hashtag on Twitter. It’s a meme you see repeated relentlessly by white supremacists on message boards like 4chan’s /pol/. Th underlying narrative of that argument is clear: Police are not doing anything wrong, but Obama is going to get them killed if he suggests that they are.

But it was more than the content of his response. He also used phrases and syntax that are common among angry reactionaries.

Above: Luckey using 4chan’s greentexting markdown to make fun of someone else.

One term he used was “LEOs,” which is shorthand for “law enforcement officers.” That’s a term that is primarily used by people who work in law enforcement or in industries related to that field. But because those industries are indistinguishable from the National Rifle Association gun-advocacy group, the term LEO has spread into common use among people defend the actions of police officers in comment sections and on Twitter.

In addition to using “LEOs,” Luckey also responded to someone else in my comments using a popular 4chan format. In an effort to mock one of my other friends, the Oculus founder used 4chan’s “greentexting” syntax to imply she was being ridiculous. Greentexting is when 4chan users put the “>” symbol in front of their text to turn it green. This signifies the user is telling a story or the user is quoting someone else to highlight how silly they are. It’s something you likely wouldn’t use in an argument about the murder of police officers unless you were someone who regularly contributes to 4chan.

So based on that interaction, I always figured Luckey was someone who considered himself just another anon shitposter who loves the way the system works because the system works just fine for him. And I likely figured right. The Daily Beast’s report confirmed that Luckey gives money to a group of reactionaries founded by /pol/ users, moderators of /the_donald/ Reddit forum, and permanently banned-from-twitter troll and Gamergate ally Milo Yiannopoulos.

And that fits exactly with the man who argued with me on Facebook.