Imbera Electronics is announcing today that it’s raised $15 million in a second round of funding for its 3-D packaging solutions for semiconductor chips.

The company hopes to make 3-D chip packaging more economical, which, in turn, will allow electronics makers to pack more functions into smaller gadgets such as cell phones. It’s an important area of innovation in a time when smartphones are taking over people’s lives. 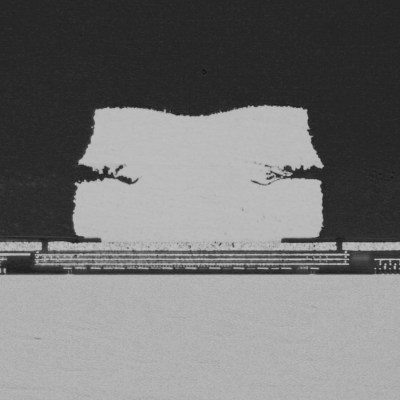 Chip packaging is becoming a tougher technical problem with the advance of Moore’s Law, the observation first made by former Intel chairman Gordon Moore that chip capacity doubles every couple of years. With each new generation of Moore’s Law, chip makers tend to pack twice as many features into the same size chip. But the input-output capacity of chips doesn’t double in the same fashion.

To deal with that, chip packagers have been going 3-D, stacking chips together to build virtual skyscrapers on silicon. Imbera is doing something similar (as seen under a powerful microscope to the right), but it also lets chip makers embed more silicon components — including passive components that have usually been separate chips — into the fabric of a circuit board, known as a motherboard.

Embedding chips into motherboards has been happening for some time, but you usually had to deal with five or six suppliers, one at a time, said Jeff Baloun, chief executive of Imbera. The company now has a production process that integrates all of the separate vendor functions into a single solution.

Baloun said the company believes it can manufacture the chip packages — dubbed Integrated Module Board — in high volume. It expects to launch its production in the fourth quarter of this year. A number of clients are lined up to launch, but Baloun said he couldn’t disclose their names. The customers include both the makers of devices — such as cell phone manufacturers — and the makers of chips.

Cell phones are the ideal candidates for the packaging, but any portable device where space is a premium could use the Imbera technology. Imbera will face competition from standard packaging methods, such as stacked chips or “flip chip” packaging that allows chips to be embedded in boards without the bulky pin-based packaging associated with most chips. Competitors include rivals such as Tessera.

The key to the viability of the technology is whether it can be made in volume as costs close to standard packaging. Theoretically, the costs should be lower because the 3-D packages eliminate excess material and wires, Baloun said.

Imbera’s technology has been in the works since 1999. Risto Touminen, chief technology officer, worked on it as a student at the Helsinki University of Technology. He has been trying to perfect it since that time. Now in its third generation, the production process is much more refined, said Baloun, who joined the company in 2007. The company is building a production line in South Korea and transferring technology from its development lab in Finland. It revamped its strategy in 2007 to focus on manufacturing its own packages rather than licensing them, and it started a joint venture in Korea in 2008.

The Melbourne, Fla.-based company raised the latest round from NorthZone Ventures, Index Ventures and Conor Venture Partners. NorthZone led the round. It previously raised $2 million in a first institutional round and raised less than $1 million in seed money before that. Imbera has 40 employees.