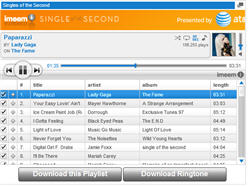 It’s been a year since Sequoia Capital’s “R.I.P. Good Times” presentation to the firm’s portfolio companies. One of Sequoia’s more high-profile startups at the time was Imeem, a site that claimed to be the first to allow free, legal music sharing and listening.

The rumor on TechCrunch this morning is true, I’ve confirmed: Imeem burned through its cash — royalties on the music were expensive — and has borrowed another $6 million to recapitalize the company, giving a shot of Instant-Gro to stock options that had wilted.

Sequoia isn’t in on the deal this time. Morgenthaler Ventures, which had invested in Series A, will lead this round. Warner Music lent cash to the company, too, but sources agree it’s to cover royalty fees that Imeem can’t afford.

You’re wondering: Why would anyone lend imeem $6 million now? In order to make the recapitalization work, Imeem has also made two other changes that sources say made it attractive to Morgenthaler. First, Imeem convinced the major labels to take less in royalties. Second, it chose to build its own content delivery system, rather than buy or rent one. The result has been, contrary to most Web pundits’ expectations, lower costs.