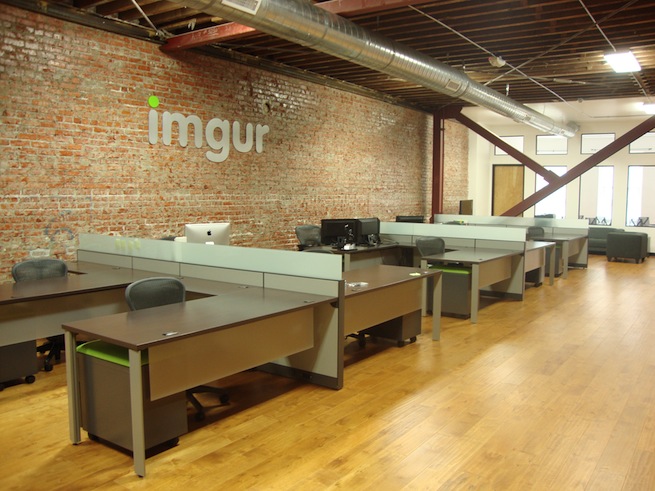 Image hosting service Imgur is now serving up more than 1 billion images per day and has doubled its monthly page views to 2 billion in less than six months, the company announced today.

Imgur branded itself as the “simple image hosting service” because its tailor-made for social news sharing sites like Reddit and Digg. (In fact, a large percentage of total links submitted to Reddit are from Imgur). Imgur’s main selling point is the speed to which you can share a photo or goofy image. Without needing an account, users can upload a single image or group of images to the site by dragging and dropping the files directly on the webpage. Each image has a unique URL that users can then send to friends or share on social networks. It’s probably faster to use Imgur in most cases than it is to send a file over email.

“Speed is a huge priority to us, because Imgur is all about instant gratification,” Imgur founder Alan Schaaf told VentureBeat in an interview. “So, we need to be able to serve our pages and our images as quick as possible.”

Schaaf said the site is experiencing average traffic and upload growth of about 20 percent per month, which started happening after the company began using content delivery network EdgeCast to speed up its delivery of images back in June 2011. In addition to its massive page view traffic growth, Imgur also sees about half a million images uploaded daily, and over three million unique visitors per day. To give you some perspective on where the company stands against other dedicated image services, Imgur’s Alexa U.S. traffic rank is 29 compared to professional photo service Flickr’s rank of 37.

But probably the most interesting thing about Imgur is that its managed to turn a profit soon after launching in 2009 — with five employees and no outside funding raised. The company was named the best bootstrapped startup at the 2011 Crunchies Awards. That doesn’t mean the startup isn’t interested in taking on some funding at some point, but for now it isn’t necessary, Schaaf told me.

“We don’t exactly need funding right now,” he said, adding that its more than capable of funding itself with the direction the company is going. Schaaf said his startup has already been approached by a handful of firms and angel investors that are interested, and that “we’re totally open to taking on money when the need arises.”

Schaaf didn’t specifically mention what that “need” might be, but did acknowledge that funding would be necessary if Imgur ever decided to take on Yahoo-owned professional photo service Flickr. Imgur currently offers a pro account option for $24 annually, which gives you more storage space for images, image compression limits of up to 5MB, and no advertisements. However, Schaaf said this isn’t Imgur’s main focus, nor is it interested in competing with Flickr more directly at this time.

The majority of Imgur’s revenue comes from advertising. Last month, the company reached an agreement with ThoughtLeadr to bring a self-serve advertising to the site. In addition to speeding up Imgur’s performance, the San Francisco-based company is also focused on growing its own community of image sharer.