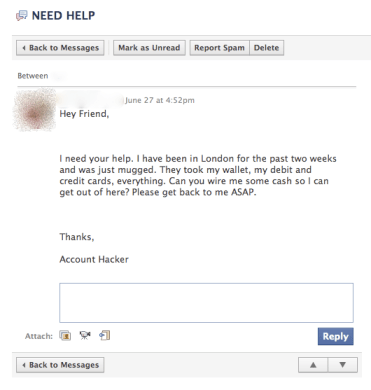 Ever seen one of those in your Facebook inbox? Hopefully you have never responded, because this is “social spam” and one of the reasons why anti-spam service company Impermium has received $1M in seed funding.

The company, founded by ex-Yahoo anti-spam soldiers, including Mark Risher, provides a subscription-based service that monitors your website in real time for user-generated spam, account hackings and other untrustworthy interactions. It then provides what Impermium calls, “hosted mitigation solutions,” which allow you to stage a spam intervention.

According to Impermium’s website, startup companies can spend 30-60 hours a week controlling spam. Even more startling, a 2010 study by Sophos revealed 67% of social network users have been spammed socially. That’s twice as many seen only two years before in 2008. With the over 500 million active users cited on Facebook’s statistics page, spammers have a larger audience than ever.

Currently, spam prevention measures are unreliable and even detrimental to engagement on you

r site. You know that annoying series of numbers and letters you have to enter before submitting a comment or finalizing a purchase? That’s CAPTCHA, an automated challenge aimed at telling humans and computers apart, which Impermium says can drop engagement rates by 10%.

Charles River Ventures partner, George Zachary, said he has faith that the software can protect the social audience and business owners from losing web conversation. “We’re investing in Impermium because we think it has a great, experienced team and the most viable technology approach. If Impermium gets it right, not only will it become a large-scale company, but it will also provide essential cyber-security defense to the world’s most prominent sites.”

Impermium engages 50 million customers globally despite being in a test period.