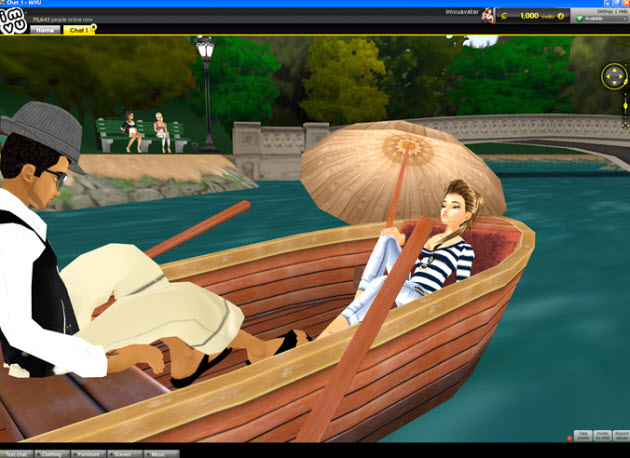 IMVU has been fairly quiet about its success in virtual chat rooms, where people can create their own dressed-up 3-D characters and socialize in graphically beautiful settings. But today it’s starting to trumpet loudly that it has established a strong business with a $25 million annual revenue run rate.

Cary Rosenzweig, chief executive and president of the Palo Alto, Calif.-based company, said in an interview the company has doubled its revenue in the past year in spite of the recession and the cooling off of the virtual world hype. IMVU now has more than 40 million registered users and six million unique visitors a month, according to comScore. For the past three months, the company has been profitable, Rosenzweig said.

If the company keeps up its momentum, it will have a shot at generating the kind of highly profitable larger business that publicly traded chat/virtual world companies in China have seen. Rosenzweig says he admires companies such as China’s Changyou and hopes to duplicate their success. He’s speaking up about the success now because IMVU hopes to land partners that can drive more traffic to the site.

“I think it’s important that potential partners know which companies in this space are going to be around tomorrow,” Rosenzweig said.

IMVU grew its revenue primarily by increasing the sale of virtual currency to its members, who use that currency to purchase virtual goods ranging from clothing for their avatars to furniture for their rooms. Since 2004, IMVU’s own users have created more than 3 million items, giving IMVU the biggest catalog of virtual goods in the world.

Users can create their own avatars for free, but IMVU got a big boost this summer after it launched a new user interface. That interface allows users to try clothes on their avatars using a “try it” button. They can then purchase the clothing with virtual currency by clicking on a “buy it” button. With the new interface, more users are clicking on “buy it.” In the past 30 days, more than 35,000 user-developers have sold virtual goods. Those users are adding more than 4,000 customized 3-D items for sale each day.

Rosenzweig said the business model is dependent mostly on the sale of virtual currency. Users buy credits from IMVU and then use those credits to buy items from each other. Developers can get training on 3-D artistry and within a very short time upload their creations for a nominal credit fee. They keep the vast majority of the credits proceeds from sales of their virtual goods. If developers want to cash out, they can do so through a free market economy that allows them to sell credits directly to third-party registered credit brokers, who buy and sell credits on third-party websites. After they sell credits, these brokers transfer the credits to the buyer on IMVU, where IMVU takes a small processing fee in the form of credits. 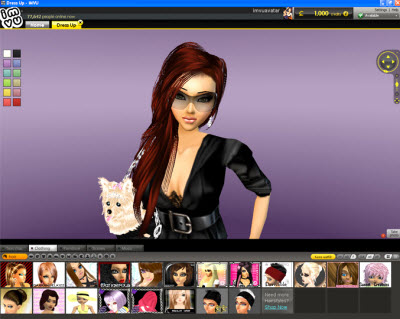 “We’re kind of like an eBay for virtual goods,” Rosenzweig said.

IMVU also recently started inserting advertisements into the site and spending some of its profits on online marketing. It accommodates younger users (who don’t have credit cards) with the sale of prepaid cards in 24,000 outlets, and it also lets users buy credits by filling out surveys or special offers from Offerpal.

With all of these changes, revenue has grown from roughly $2.5 million in the first quarter of 2008 to an expected $6 million-plus in the third quarter of 2009. Revenue has been growing each month for the last 13 months, even with the downturn. Monthly revenue is now above $2 million.

Despite its large growth, the company has been able to keep its costs low. One reason is the way it is designed. Companies such as Linden Lab, which runs virtual world Second Life, have enormous server costs because they have to maintain a physically interconnected virtual world 24 hours a day. But IMVU’s virtual spaces are limited to rooms or scenes (like the beach or an estate), and its content is user-generated. That means that IMVU doesn’t have to buy or lease a lot of new servers or hire a lot of artists as it adds more users or catalog items. By contrast, a virtual world owner (without user-generated content and with a continuous virtual world) would have to add a lot of fixed costs as it expands. 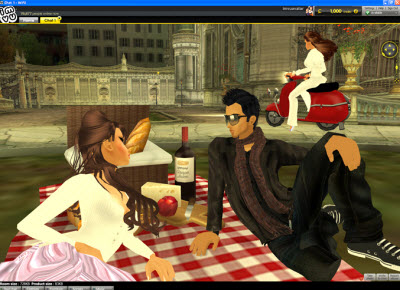 IMVU has 59 employees and has raised $30 million in three rounds of venture funding to date. Most recently it raised $10 million in January from Best Buy Capital, Menlo Ventures, Allegis Capital, and Bridgescale Partners.

Rivals include Facebook and MySpace on the social networking level. In virtual worlds/virtual chat, its rivals include Meez and Gaia Online. The fashion-based game being developed by Nurien Software is also a likely competitor, when Nurien launches its highly realistic fashion game world in 2010.

Both of the latter appeal to younger teens. But 58 percent of IMVU’s users are 18 or older. About 69 percent are female, largely because of the fashion-oriented nature of the site. About 62 percent are in the U.S.

Rosenzweig said there are plenty of avenues for expansion in the future. That includes expansion into non-English speaking geographies. The company could also move into mobile platforms and the Mac.