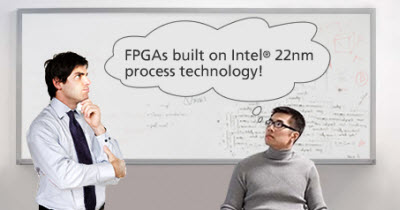 Intel has agreed to make chips for semiconductor start-up Achronix Semiconductor, marking the first time that the world’s biggest chip maker has given another company access to its golden goose, its most sophisticated manufacturing processes.

The Wall Street Journal reported that Intel will formally ally itself with Achronix, which designs a variety of high-performance programmable chips used in high-speed communications. Normally, Achronix would have to go to a contract chip manufacturer known as a foundry, such as Taiwan Semiconductor Manufacturing, to have its chips made.

Achronix says the deal with Intel will allow its chips to have 300 percent better performance, 50 percent lower power, and 40 percent lower cost than its previous generation of products. Achronix’s Speedster chips are used in high-speed networking, broadband communications, encryption, high-performance computing, video and imaging, and military and aerospace.

Intel’s manufacturing process is usually a couple of years ahead of manufacturing rivals. Intel spends billions of dollars per year to stay ahead of rivals and build factories that are so advanced that they help Intel differentiate its chips. The company usually dedicates all of its advanced factory capacity to making its own microprocessors, which are the brains of PCs.

Sometimes Intel farms out older manufacturing lines to other companies. But the Journal says that Achronix will get access to the top of the line at Intel, including a new 22-nanometer production process to be used in factories that won’t start pumping out chips until late 2011.

John Lofton Holt, chief executive of Achronix in San Jose, Calif., said the new development will let Achronix grab a bigger share of the market for field programmable gate arrays (FPGAs), or chips that are programmed for specific tasks after they are received by customers.

Gartner estimates that the market for FPGAs will grow 44 percent in 2010, outpacing the overall chip market. Achronix competes with two large chip design firms, Xilinx and Altera. Achronix is expected to account for a lot less than 1 percent of Intel’s available capacity for 22-nanometer production. Achronix has raised $90 million in funding since 2004.